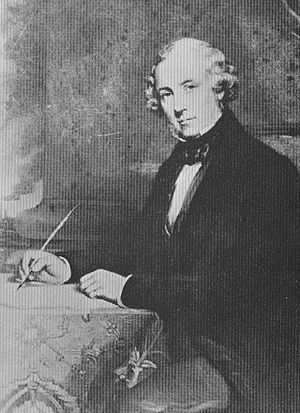 Born in Dowlais, Merthyr Tydfil, Wales, as the son of Thomas Guest, a partner in the Dowlais Iron Company. Guest was educated at Bridgnorth Grammar School and Monmouth School before learning the trade of ironmaking in his father's foundry at the hands of works manager John Evans. He was renowned for his ability to roll a bar of steel or cut a tram of coal as well as any of his father's workmen.[1]

On his father's death in 1807, John inherited his share of the company and developed the business, becoming sole owner of the works in 1815. In 1817 he married Maria Rankin but their marriage was short lived, Maria dying just nine months later. He subsequently married Lady Charlotte Elizabeth Bertie, daughter of Albemarle Bertie, 9th Earl of Lindsey. Guest was elected Member of Parliament for Honiton, Devon in 1825, holding the seat until defeated by Sir George Warrender in 1831.[dubious – discuss] In 1832 he became the first MP for Merthyr Tydfil.[2]

His public works included a school at Dowlais, designed by Sir Charles Barry. He was a Fellow of the Royal Society and a Member of the Institution of Civil Engineers. He was the first chairman of the Taff Vale Railway, and was created a baronet, of Dowlais in the County of Glamorgan, in 1838.[2][3]

On his death, the Dowlais Iron Company having become the largest producer of iron in the world:[2] He died in 1852, leaving five sons and five daughters, including:

Guest was buried in an iron coffin under a red granite slab in the local St John's Church, which had been built for him in 1827.[5]