From Infogalactic: the planetary knowledge core
Jump to: navigation, search
For the U.S. Secretary of the Navy, see John L. Sullivan (Navy). For the 19th-century American columnist and editor, see John L. O'Sullivan. For others, see John Sullivan (disambiguation).

John Lawrence Sullivan (October 12, 1858 – February 2, 1918), also known as the Boston Strong Boy, was an American boxer recognized as the first Heavyweight Champion of gloved boxing, holding the title from February 7, 1882, to 1892. He is generally recognized as the last heavyweight champion of bare-knuckle boxing under the London Prize Ring Rules.

John Lawrence Sullivan was born in 1858 in the South End[1] neighborhood of Boston to Irish immigrant parents, Michael Sullivan from Abbeydorney, County Kerry and the former Catherine Kelly from Athlone, County Westmeath. Sullivan was nicknamed The Boston Strongboy. As a youth he was arrested several times for participating in bouts where the sport was outlawed. He went on exhibition tours offering people money to fight him. Sullivan won more than 450 fights in his career.

In 1883–84 Sullivan went on a coast-to-coast tour by train with five other boxers. They were scheduled to hold 195 fights in 136 different cities and towns over 238 days. To help promote the tour, Sullivan announced that he would box anyone at any time during the tour under the Queensberry Rules for $250. He knocked out eleven men during the tour. 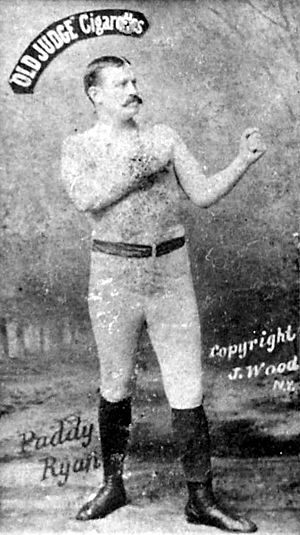 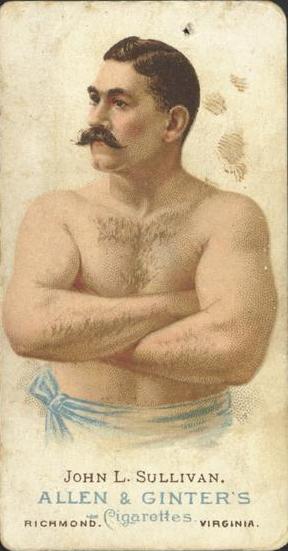 A cigarette trading card of Sullivan produced in late 1886.

In Sullivan's era, no formal boxing titles existed. He became a champion after defeating Paddy Ryan in Mississippi City, near Gulfport, Mississippi on February 7, 1882. Modern authorities have retroactively labelled Ryan the "Heavyweight Champion of America", but any claim to Ryan's being a "world champion" would have been dubious; he had never contended internationally as Sullivan had.

Depending on the modern authority, Sullivan was first considered world heavyweight champion either in 1888 when he fought Charley Mitchell in France, or in 1889 when he knocked out Jake Kilrain in round 75 of a scheduled 80-round bout. Arguably the real first World Heavyweight champion was Jem Mace, who defeated Tom Allen in 1870 at Kenner, Louisiana, but strong anti-British sentiment within the mostly Irish-American boxing community of the time chose to disregard him.

When the modern authorities write of the "heavyweight championship of the world," they are likely referring to the championship belt presented to Sullivan in Boston on August 8, 1887. The belt was inscribed Presented to the Champion of Champions, John L. Sullivan, by the Citizens of the United States. Its centerpiece featured the flags of the US, Ireland, and the United Kingdom.

Mitchell came from Birmingham, England and fought Sullivan in 1883, knocking him down in the first round. Their third meeting took place in 1888 on the grounds of a chateau at Chantilly, France, with the fight held in driving rain. It went on for more than two hours, at the end of which both men were unrecognisable and had suffered much loss of blood; neither could lift his arms to punch and the contest was considered a draw.

At this point, the local gendarmerie arrived and arrested Mitchell. He was confined to jail for a few days and later fined by the local magistrate,[citation needed] as bare-knuckle boxing was illegal in France at that time.[citation needed] Swathed in bandages, Sullivan was helped to evade the law and taken across the English Channel to spend the next few weeks convalescing in Liverpool. 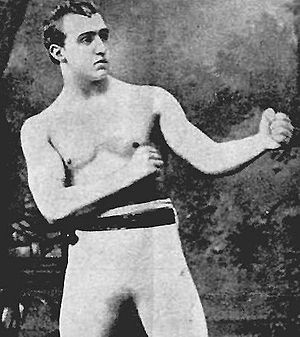 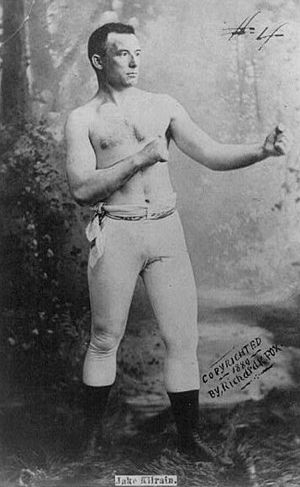 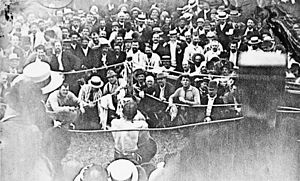 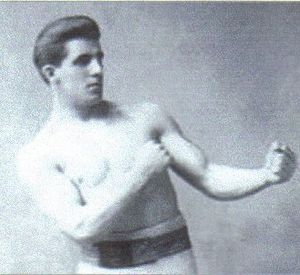 The Kilrain fight is considered to be a turning point in boxing history because it was the last world title bout fought under the London Prize Ring Rules, and therefore the last bare-knuckle heavyweight title bout. It was one of the first sporting events in the United States to receive national press coverage.

For the first time, newspapers carried extensive pre-fight coverage, reporting on the fighters' training and speculating on where the bout would take place. The traditional center of bare-knuckle fighting was New Orleans, but the governor of Louisiana had forbidden the fight in that state. Sullivan had trained for months in Belfast, New York under trainer William Muldoon, whose biggest problem had been keeping Sullivan from liquor. A report on Sullivan's training regimen in Belfast was written by famed reporter Nellie Bly and published in the New York World.[2]

Rochester reporter Arch Merrill commented that occasionally Sullivan would "escape" from his guard. In Belfast village, the cry was heard, "John L. is loose again. Send for Muldoon!" Muldoon would snatch the champ away from the bar and take him back to their training camp.[citation needed]

On July 8, 1889, an estimated 3000 spectators boarded special trains for the secret location, which turned out to be Richburg, a town just south of Hattiesburg, Mississippi. The fight began at 10:30, and it looked as if Sullivan was going to lose, especially after he vomited during the 44th round. But the champion got his second wind after that, and Kilrain's manager finally threw in the towel after the 75th round.

Undefeated at that point, Sullivan did not defend his title for the next four years. 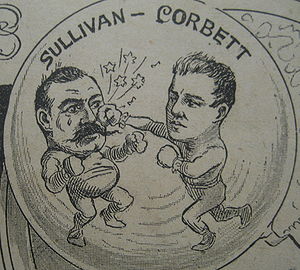 Sullivan agreed to defend his title in 1892, against challenger "Gentleman Jim" Corbett. The match was on 7 September in New Orleans. It began at 9PM in the electrically illuminated Olympic Club in the upper Ninth Ward neighborhood now known as Bywater section, the venue filled to its 10,000 person capacity despite hefty ticket prices ranging from $5 to $15 (approximately $117 to $353 in 2009 dollars). The heavyweight contest occurred under the Marquess of Queensberry Rules, but it was neither the first title fight under those rules nor was it the first title fight using boxing gloves. Corbett was younger and faster, and his boxing technique enabled him to dodge Sullivan's crouch and rush style. In the 21st round Corbett landed a smashing left "audible throughout the house" that put Sullivan down for good. Sullivan was counted out and Corbett declared the new champion. When Sullivan was able to get back to his feet, he announced to the crowd, "if I had to get licked I'm glad I was licked by an American".[3]

Sullivan is considered the last bare-knuckle champion because no champion after him fought bare-knuckled. However, Sullivan had fought with gloves under the Marquess of Queensberry Rules as early as 1880 and he only fought bare knuckle three times in his entire career (Ryan 1882, Mitchell 1888, and Kilrain 1889). His bare-knuckle image was created because both his infrequent fights from 1888 up to the Corbett fight in 1892 had been bare-knuckle. 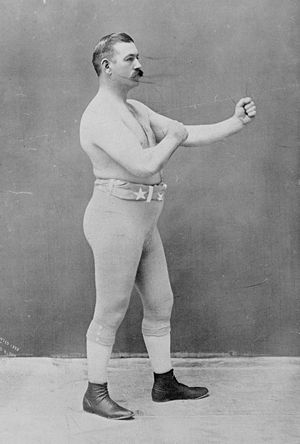 Sullivan retired to Abington but appeared in several exhibitions over the next 12 years, including a three-rounder against Tom Sharkey and a final two-rounder against Jim McCormick in 1905 in Grand Rapids, Michigan. He continued his various careers outside boxing such as stage actor, speaker, celebrity baseball umpire, sports reporter, and bar owner. In his later years, Sullivan also gave up his life long addiction to alcohol and became a prohibition lecturer.[citation needed]

Overweight and unhealthy from a long life of overindulging in food and drinks as well as from the effects from prizefighting, Sullivan died at age 59 and is buried in the Old Calvary Cemetery in Roslindale, a neighborhood of Boston. He died with barely 10 dollars in his pocket.