From Infogalactic: the planetary knowledge core
Jump to: navigation, search
This article is about the artist. For his son, the Jesuit priest, see John LaFarge, Jr. 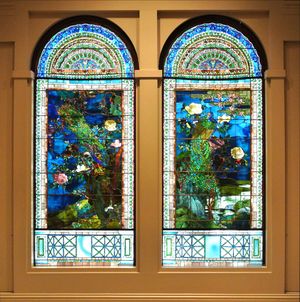 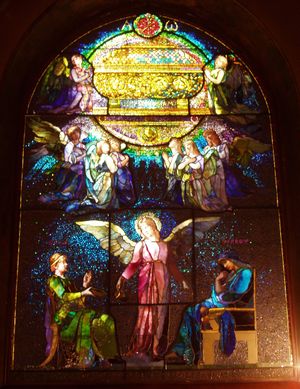 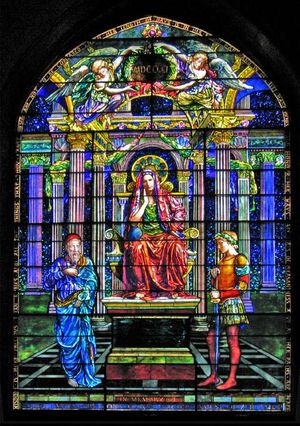 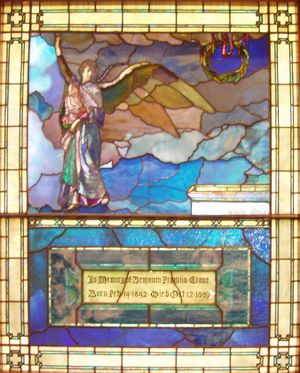 La Farge was born in New York City to wealthy French parents and was raised bilingually;[1] as a child, he and his brothers produced a handmade magazine in French entitled Le Chinois.[2]:17 His interest in art began during his studies at Mount St. Mary's University in Maryland[3] and St. John's College (now Fordham University) in New York. He initially intended to study law, but this changed after his first visit to Paris, France in 1856.[1] Stimulated by the arts in the city, he studied with Thomas Couture and became acquainted with notable literary people. La Farge also studied with the painter William Morris Hunt in Newport, Rhode Island.[4][5]

La Farge's earliest drawings and landscapes, from his studies in Newport, show marked originality, especially in the handling of color values. Many of La Farge's mythological and religious paintings, including Virgil, were executed in an area of Rhode Island known as "Paradise," in a forest which La Farge called "The Sacred Grove" after Virgil.[6]

He was a pioneer in the study of Japanese art, the influence of which is seen in his work. During his life, La Farge maintained a studio at 51 West 10th Street in Greenwich Village, which now is part of the site of Eugene Lang College at the New School University.[7]

Between 1859 and 1870, he illustrated Tennyson's Enoch Arden and Robert Browning's Men and Women.

In the 1870s, La Farge began to do murals, which became popular for public buildings as well as churches. His first mural was done in Trinity Church, Boston, in 1873. Then followed his decorations in the Church of the Ascension (the large altarpiece) and St. Paul's Chapel, New York. For the Minnesota State Capitol at St. Paul, he executed at age 71 four great lunettes representing the history of law. He created a similar series based on the theme of Justice for the State Supreme Court building at Baltimore, Maryland. He also took private commission from wealthy patrons (e.g. Cornelius Vanderbilt) and was reputedly worth $150,000 at one point.[8]

La Farge made extensive travels in Asia and the South Pacific, which inspired his painting. He visited Japan in 1886, and the South Seas in 1890 and 1891, in particular spending time and absorbing the culture of Tahiti.[1] Henry Adams accompanied him on these trips as a travel companion.[1] He visited Hawaii in September 1890, where he painted scenic spots on Oahu and traveled to the Island of Hawaii to paint an active volcano.[9]

In 1892, La Farge was brought on as an instructor with the Metropolitan Museum of Art Schools to provide vocational training to students in New York City.[10] He served as President of the National Society of Mural Painters from 1899 to 1904.[11]

He learned several languages (ancient and modern), and was erudite in literature and art; by his cultured personality and reflective conversation, he influenced many other people. Though naturally a questioner, he venerated the traditions of religious art, and preserved his Catholic faith.

La Farge died at Butler Hospital, in Providence, Rhode Island in 1910.[12] The interment was at Green-Wood Cemetery, in Brooklyn, New York. His papers, together with some of those of certain children and grandchildren, are held by Yale University Library.[13]

La Farge experimented with color problems, especially in the medium of stained glass. His work rivaled the beauty of medieval windows and added new resources by his use of opalescent glass and by his original methods of layering and welding the glass. Opalescent glass had been used for centuries in tableware, but it had never before been formed into flat sheets for use in stained-glass windows and other decorative objects. For his early experiments, La Farge had had to custom-order flat sheets of opalescent glass from a Brooklyn glass manufacturer.[14] La Farge apparently introduced Tiffany to the new use of opalescent glass sometime in the mid 1870s, showing him his experiments.[14] Sometime in the late 1870s or early 1880s, however, relations between the artists soured, probably due to a lawsuit between the two men.[2]:34[14]

La Farge filed a patent application on Nov. 10, 1879, shortly after a newspaper account praised a recent window he made for Richard Derby of Long Island as "the first application of a new material [opalescent glass] to windows."[14] He was granted patent no. 224,831 on February 24, 1880, for a "Colored-Glass Window", with technical details about manufacturing opalescent sheet glass and layering it to create windows.[14] Eight months later, Tiffany applied for a similar patent, which was granted in 1881 as no. 237,417. The major difference in their patents is that Tiffany lists somewhat different technical details, for instance relating to the air space between glass layers. Since La Farge's patent focused more on the material and Tiffany's more on its use in construction, it appeared that the two patents might be mutually dependent, prohibiting either artist from making stained-glass windows without the other's permission. There is some indication that La Farge may have come to some kind of agreement with Tiffany on the use of La Farge's patent, but the details are unclear and disputed by scholars.[14] What does seem certain is that around 1882 La Farge planned to sue Tiffany, claiming that Tiffany had infringed his patent by appropriating some of his working methods for opalescent sheet glass.[14] Official records of the lawsuit have not been found, suggesting it was never filed, but there are multiple references to it in the correspondence of both men.[14] Possibly, as stained glass increased in popularity, drawing other artists to the medium, both La Farge and Tiffany decided it would be too much trouble to legally defend their patents.

Among La Farge's many stained-glass works are windows at:

Several of his windows, including Peonies Blown in the Wind (1880), are in the collection of the Metropolitan Museum of Art, New York.

Margaret's father was Christopher Grant Perry, the son of Elizabeth Champlin Mason and Commodore Oliver Hazard Perry. He was a descendant of Gov. Thomas Prence (1599 – March 29, 1673), a co-founder of Eastham, Massachusetts, a political leader in both the Plymouth and Massachusetts Bay colonies, and governor of Plymouth (1634, 1638, and 1657–1673); and of Elder William Brewster (c. 1567 – April 10, 1644), the Pilgrim leader and spiritual elder of the Plymouth Colony, who had been a passenger on the Mayflower.

Her brother was Thomas Sergeant Perry, a Harvard faculty member and scholar,[16] who was married to artist Lilla Cabot Perry.[17]

Christopher Grant La Farge, his eldest son, was a partner in the New York-based architectural firm of Heins & LaFarge. He designed projects in Beaux-Arts style, notably the original Byzantine Cathedral of St. John the Divine, the Yale undergraduate society St. Anthony Hall (extant 1893–1913)[18] and the original Astor Court buildings of the Bronx Zoo.

Emily Marie La Farge married Edward S. Childs, and their daughter Frances Sergeant Childs was a member of the founding faculty of Brooklyn College, where she was a professor of history.[19]

John La Farge, Jr., S.J., the youngest of the children, became a Jesuit priest and a strong supporter of anti-racist policies.

La Farge is honored together with Ralph Adams Cram and Richard Upjohn with a feast day on the liturgical calendar of the Episcopal Church (USA) on December 16.