Lawrence came from Richmond, North Yorkshire.[1] Lawrence spent his early years in Derry, part of the Province of Ulster in the northern part of Ireland, and was educated at Foyle College (now Foyle and Londonderry College). After attending the East India Company College, Lawrence went to India in 1829 along with his older brother, Sir Henry Montgomery Lawrence. He soon became a magistrate and tax collector in Delhi, where he was known for his concern for the plight of the peasantry as long as they did not question British rule. 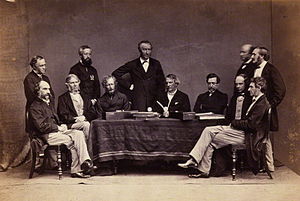 John as Viceroy of India, sitting middle, with his Executive Council members and Secretaries

During the First Sikh War of 1845 to 1846, Lawrence organized the supplying of the British army in the Punjab and became Commissioner of the Jullundur district, serving under his brother, the Governor of the province. In that role he was known for his administrative reforms, for subduing the hill tribes, and for his attempts to end the custom of suttee.

In 1849, following the Second Sikh War, he became a member of the Punjab Board of Administration under his brother, and was responsible for numerous reforms of the province, including the abolition of internal duties, establishment of a common currency and postal system, and encouraged the development of Punjabi infrastructure, earning him the sobriquet of "the Saviour of the Punjab". In this work his efforts to limit the power of local elites brought him into conflict with his brother, and ultimately led to the abolition of the Administrative Board, instead becoming Chief Commissioner in the executive branch of the province.

In that role, Lawrence was partly responsible for "preventing the spread" of the Indian Rebellion of 1857 to Punjab, and negotiated a treaty with the Afghan ruler Dost Mohammed Khan, and later led the troops which recaptured Delhi from the rebellious sepoys. For this, he was created a baronet[2] and received an annual pension from the East India Company of £2,000.

He returned to Britain in 1859, but was sent back to India in 1863 to become Viceroy to succeed Lord Elgin, who had unexpectedly died. As Viceroy, Lawrence pursued a cautious policy, avoiding entanglement in Afghanistan and the Persian Gulf. In domestic affairs, he increased educational opportunities for Indians, but at the same time limited the use of native Indians in high civil service posts. He was raised to the peerage as Baron Lawrence, of the Punjaub and of Grateley in the County of Southampton,[3] on his return to England in 1869. 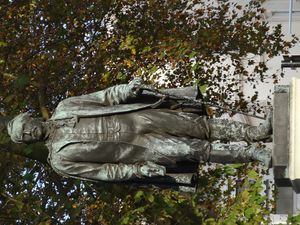 Lord Lawrence married Harriette Katherine, daughter of The Reverend Richard Hamilton, in 1841. Their younger son Charles was a businessman and was created Baron Lawrence of Kingsgate in 1923. Their second son, Henry Arnold, was a noted rugby player and captained England in two matches, including the first ever international against Ireland. Lord Lawrence died in June 1879, aged 68, and was succeeded in his titles by his eldest son, John. Lady Lawrence died in December 1917.

A boarding house at the East India Company College (today Haileybury and Imperial Service College) and a "house" at Foyle College was subsequently named after him. Lawrence is also a Senior Wing House at St Paul's School, Darjeeling, in India, where all the Senior Wing Houses are named after colonial-era civil service and military figures. A statue of him stands at Foyle and Londonderry College (having been, originally, erected in Lahore). The statue, by Sir Joseph Boehme, once showed Lawrence with a pen in one hand and a sword in the other to illustrate his versatility as an administrator and a soldier but vandals have since damaged the sword. Another statue of Lawrence stands in Waterloo Place in central London.