He has twice won The Francis Williams Award for illustration (sponsored by the Victoria and Albert Museum, London), and twice been runner-up for the Kurt Emil - Maschler Award.[2] He has also published children's books in his own right including This Little Chick which was a New York Times Book Review Best Illustrated Children’s Book of the Year.[3] He was master of the Art Workers Guild in 1990,[4] and now lives in Cambridge.[5]

Born in Hastings in 1933, John Lawrence was educated in Salesian schools, first in Burwash, Sussex then in Cowley, Oxfordshire, before attending Hastings School of Art (1951 - 1953). After National Service in West Africa he moved to the Central School of Art and Design (1955 - 1957)[4] where he was introduced to wood engraving by Gertrude Hermes.[6]

In the 1960s he taught at Brighton School of Art and then as a visiting professor of illustration at Camberwell School of Art until 1993.

Until 2010 he taught at Cambridge School of Art, lecturing on the M.A. course in Children's Book Illustration.[2][4] 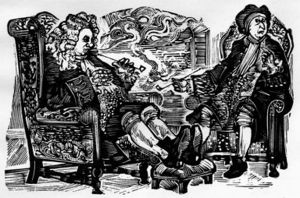 What can they be doing, brother? An illustration from the Folio Society edition of Tristram Shandy by Lawrence

He has illustrated more than 200 books,[1] both adult and children's ranging from Shakespeare to Alan Ahlberg including the best-selling Watership Down by Richard Adams and has recently worked with Philip Pullman producing all the illustrations for Lyra's Oxford and Once Upon a Time in the North[2][4][7]

His work is represented in the Ashmolean, the Victoria and Albert Museum, Manchester Metropolitan University and Seven Stories in Newcastle.[8]