John Lee was a Scottish-Canadian - Canadian inventor and arms designer, best known for co- inventing a prototype bolt-action rifle with his brother James Paris Lee. The rifle they made led to the Lee–Metford and Lee–Enfield series of rifles.

Harrowing from Hawick, Scotland the Lee family emigrated to Ontario in Canada c.1835. After John grew up he moved to a small town along the Sydenham River called Wallaceburg.

In 1878, Lee and his brother James Paris perfected a rifle with a box magazine in Wallaceburg [1]. This rifle later became an antecedent to the famous Lee–Enfield rifle. A well trained gunman could fire approximately 15-30 shots a minute. The prototype was tested successfully in Wallaceburg. The rifle, still in exhistence, is housed at the Wallaceburg and District Museum[2].[1] 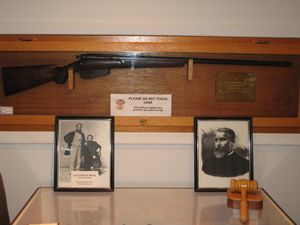 In the spring of 1964 Frank Mann, Wallaceburg’s local historian, and Darcy McKeough, Chatham-Kent’s M.P.P. corresponded. The letters discussed the possibility of erecting a plaque to commemorate the first test shot of the Lee rifle in Wallaceburg. The two discovered that they needed the approval of the Archaeological and Historic Sites Board of Ontario (A.H.S.B.O.) to get official historic site designation.

Historians and dignitaries such as J.M.S. Careless, Richard Apted, Harry Pietersma and James Auld helped research and facilitate the investigation. In over a decade of study few documents were found to substantiate that the first shot occurred in Wallaceburg. Nonetheless, the A.H.S.B.O. recognized that there was a vast amount of other evidence that could not be ignored. Most of the testimonials came from oral history passed down through the decedents of James Paris and John Lee. In 1975, they erected a plaque in civic park that stated, “Tradition holds that this (the first firing) occurred at Wallaceburg while Lee was visiting his brother John, a local foundry owner.” The plaque is located in Civic Park close to the original location of John Lee’s foundry.

It is believed that the first shots occurred just outside the Lee Foundry. The target was an oak tree, on the South Side of Wallaceburg, across the Sydenham River.

The Lee rifle prototype has been a controversial topic. Local citizens believe that it is the original prototype. Outsiders and critics claim that there are three rifles that date back to the period of when the prototype was created.

Eugene Myszkowski, a Lee rifle historian, and expert on the topic had an interesting find when he examined “the prototype”. In his opinion, the rifle pre-dates the Borchardt patent of 1882. The museum prototype is different from post-Borchardt patent rifles because it has a riveted magazine spring. Myszkowski outlines how post-Borchardt rifles were different: "[They] solder[ed] two stamped shells together, using a riveted magazine spring and a shallow magazine catch notch in the rear rip. The cartridge guide grooves were only on the upper rear of the magazine."[2] The museum prototype has none of the later specifications.