From Infogalactic: the planetary knowledge core
Jump to: navigation, search
For other MPs of this name, see John Lyttelton. 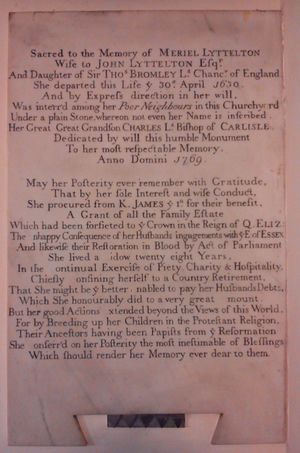 Sir John Lyttelton (1561–1601) was member of the Lyttelton family who served as Member of Parliament for Worcestershire during the reign of Queen Elizabeth I.

He was the eldest son of Gilbert Lyttelton. He entered Magdalen College, Oxford in 1576 and studied law at the Inner Temple. He married Meriel, daughter of Sir Thomas Bromley, Lord Chancellor of England. They had three sons and eight daughters.

He was concerned in the rebellion of Robert Devereux, 2nd Earl of Essex in 1601 and was in consequence tried for high treason, but died in the Queen's Bench prison in July 1601, having been reprieved from execution. In consequence, his estates (in Frankley, Halesowen, Hagley and Upper Arley) were forfeited to the Crown, but were restored to his widow Merriel on the accession of James I. She survived him 28 years and cleared the estates of debt, bringing up her children as Anglicans. The eldest became Sir Thomas Lyttelton, 1st Baronet.

His brother Humphrey was executed for his part in the Gunpowder Plot.