John MacGregor (24 January 1825 Gravesend – 16 July 1892 Boscombe, Bournemouth), nicknamed Rob Roy after a renowned relative, was a Scottish explorer, travel writer and philanthropist. He is generally credited with the development of the first sailing canoes and with popularising canoeing as a sport in Europe and the United States. He founded the British Royal Canoe Club (RCC) in 1866 becoming its first Captain.

MacGregor worked as a barrister in London, and was an accomplished artist and drew all the art in his travel books. 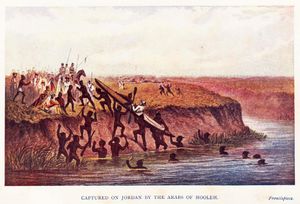 John MacGregor in his Rob Roy canoe captured during his exploration of the upper reaches of the River Jordan. Drawn by MacGregor himself.

The son of General Sir Duncan MacGregor. His schooling followed his fathers postings which included Canterbury and Dublin he graduated from Trinity College, Cambridge, having shown a talent for mathematics. His ambition to become a missionary was blocked after an argument with a superior who was a second-generation Polish immigrant who argued that MacGregor losing his temper and expressing anti-Polish sentiment was unbecoming of a missionary and he began a career in law but being of independent means he was able to follow his passion for travel. In 1849 he spent nine months exploring southern Europe, Palestine and Egypt.[1] He was introduced to canoeing during a trip to the United States and Canada in 1858.

MacGregor was a champion marksman but turned to boating when a railroad accident left him unable to hold a rifle steady.

The boat he designed was 'double-ended', (modeled after Indian canoes), but built in Lambeth of lapstrake oak planking, decked in cedar covered with rubberised canvas with an open cockpit in the center. It measured 15 feet long, 28 inches wide, nine inches deep and weighed 80 pounds (36 kg) and was designed to be used with a double-bladed paddle. He named the boat Rob Roy after the celebrated Scottish outlaw of the same name, to whom he was related.

During the 1860s, he had at least seven similar boats built and he sailed and paddled them in Europe, the Baltic and the Middle East. One of those canoes is now based at the National Maritime Museum Cornwall.

The version he used for his expedition to Egypt, Syria and Palestine in 1868/69 was slightly smaller but was designed so that he could sleep in it. He was accompanied by a dragoman, Hany, and two retainers who maintained the various base camps on the journey.[2] He visited the Nile Delta, the rivers of Damascus, as well as parts of the River Jordan and Kishon River. Whilst exploring the water courses above Lake Hula he was taken prisoner by villagers from Al-Salihiyya who lifted both him and the Rob Roy canoe out of the river whilst he kept them at bay with his paddle.[3] He was responsible for the first scientific survey of the area.

The book was internationally successful; with subsequent books and public appearances, it earned MacGregor more than ten thousand pounds. Scottish author Robert Louis Stevenson's 1876 voyage by canoe through the canals and rivers of France and Belgium, published in 1878 as An Inland Voyage, used "Rob Roy" canoes. 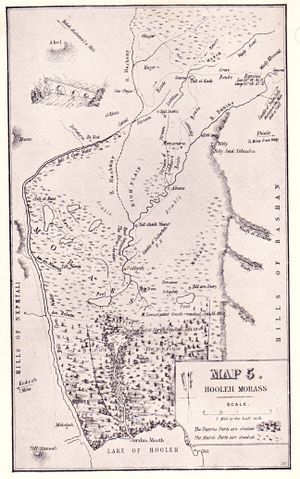 Map of upper reaches of the Jordan River made by John MacGregor from data gathered during his visit in January 1869.