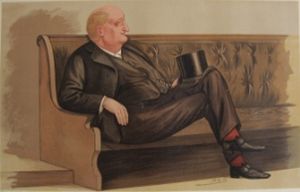 On 5 June 1901 he was appointed Honorary Colonel of the Queen's Rifle Volunteer Brigade, the Royal Scots (Lothian Regiment).[3]

He gave up his Parliamentary seat and was appointed Lord Justice Clerk in 1888,[1] taking the title Lord Kingsburgh, and presided over the Second Division of the Court of Session until 1915. He was promoted from Ensign to Lieutenant in the Royal Company of Archers on 18 June 1915.[4]

He was an enthusiastic car owner and was a founding member of the Automobile Club and was the first president of the Scottish Automobile Club. He also registered Edinburgh's first ever number plate.[5] It is also believed that Macdonald coined the popular phrase "on your bike" as he turned away the incumbent Edinburgh mayor who claimed the number plate was rightfully his. As a riposte, he had the number plate S0 produced weeks later.