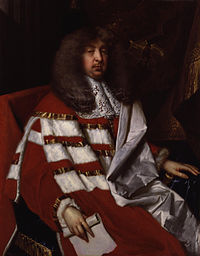 Maitland was a member of an ancient family of both Berwickshire and East Lothian, the eldest surviving son of John Maitland, 2nd Lord Maitland of Thirlestane (d. 1645), (who had been created Viscount of Lauderdale in 1616, and Earl of Lauderdale etc., in 1624), and of Lady Isabel (1594–1638), daughter of Alexander Seton, 1st Earl of Dunfermline and great-grandson of Sir Richard Maitland of Lethington, the poet.[1]

Maitland began public life as a zealous adherent of the Presbyterian cause, took the Covenant, sat as an elder in the General Assembly of the Church of Scotland at St Andrews in July 1643, and was sent to the Kingdom of England as a Commissioner for the Covenant in August, and to attend the Westminster Assembly in November.[1]

In February 1644 he was a member of the Privy Council of England and the Privy Council of Scotland, and on 20 November was one of the Commissioners appointed to meet the king at Uxbridge, when he made efforts to persuade King Charles I to agree to the establishment of Presbyterianism. In 1645 he advised Charles to reject the proposals of Independents, and in 1647 he was in London when the Scots commissioners approved the king's surrender to the Scots.[1] Later in 1647 he brought 50 horsemen to rescue Charles from English captivity whilst he was hunting at Nonsuch, but Charles refused his assistance, citing his parole to the Army.[citation needed] 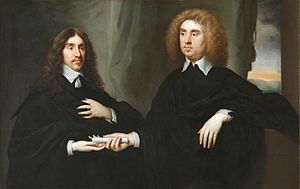 Once Charles surrendered to the Scots, Lauderdale veered round completely to the king's cause, had several interviews with him, and engaged in various projects for his restoration, offering the aid of the Scots, on the condition of Charles's consent to the establishment of Presbyterianism, and on 26 December he obtained from Charles at Carisbrooke Castle "The Engagement" by which Presbyterianism was to be established for three years, schismatics were to be suppressed, and the Acts of the Parliament of Scotland ratified, the king in addition promising to admit the Scottish nobles into public employment in England and to reside frequently in Scotland.[1]

Returning to Scotland, in the spring of 1648, Lauderdale joined the party of Hamilton in alliance with the English royalists. Their defeat at the Battle of Preston, postponed the arrival of the Charles, Prince of Wales, but Lauderdale had an interview with the prince in the Downs in August, and from this period obtained supreme influence over the future king. He persuaded Prince Charles later to accept the invitation to Scotland from Archibald Campbell, Marquess of Argyll's faction, accompanied him thither in 1650 and in the expedition into England, and was taken prisoner at the Battle of Worcester in 1651.[1] 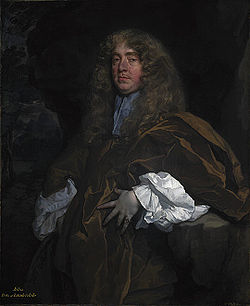 Lauderdale remained in confinement from his capture at Worcester until March 1660.[1] he was exempted from Cromwell's Act of Grace under which his estates were confiscated by Oliver Cromwell the Lord Protector.

Just before the restoration, he joined Charles II in May 1660 at Breda, the Netherlands, and in spite of the opposition of Edward Hyde, 1st Earl of Clarendon and George Monck, was appointed Secretary of State for Scotland.[1]

From this time onwards he kept his hold upon the king, was lodged at Whitehall, was "never from the king's ear nor council",[2] and maintained his position against his numerous adversaries by a crafty dexterity in dealing with men, a fearless unscrupulousness, and a robust strength of will, which overcame all opposition. Though a man of considerable learning and intellectual attainment, his character was exceptionally and grossly licentious, and his base and ignoble career was henceforward unrelieved by a single redeeming feature.[1]

He abandoned Argyll to his fate, permitted, if he did not assist in, the restoration of episcopacy in Scotland, and after triumphing over all his opponents in Scotland drew into his own hands the whole administration of that kingdom, and proceeded to impose upon it the absolute supremacy of the crown in Kirk and state, restoring the nomination of the lords of the articles to the king and initiating severe measures against the Covenanters. In 1669 he was able to boast with truth that "the king is now master here in all causes and over all persons".[1] 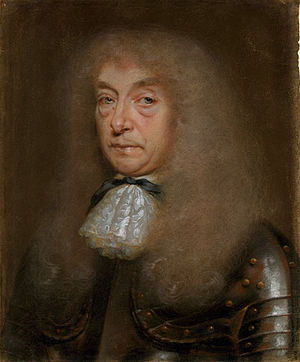 John Maitland was created Duke of Lauderdale and Earl of March on 2 May 1672.

His own power was now at its height, and his position as the favourite of Charles II, controlled by no considerations of patriotism or statesmanship, and completely independent of the English parliament, recalled the worst scandals and abuses of the Stuart administration before the English Civil War.[1]

He was a member of the Cabal Ministry, but took little part in English affairs, and was not entrusted with the first secret Treaty of Dover, but gave personal support to Charles in his degrading demands for pensions from Louis XIV. On 2 May 1672 he was created Duke of Lauderdale and Earl of March, and on 3 June Knight of the Garter.[1] He was also appointed Lord President of the Privy Council of Scotland in 1672, a position he held until 1681.[citation needed]

In 1673, on the resignation of James, Duke of York in consequence of the Test Act, he was appointed a Lord Commissioner of the Admiralty. In October he visited Scotland to suppress the dissenters and obtain money for the Third Anglo-Dutch War. The intrigues organised by Anthony Ashley-Cooper, 1st Earl of Shaftesbury, against his power in his absence, and the attacks made upon him in the House of Commons in January 1674 and April 1675, were alike rendered futile by the steady support of Charles and James.[1]

On 25 June 1674 he was created Earl of Guilford and Baron Petersham in the Peerage of England. His ferocious measures having failed to suppress the conventicles in Scotland, he summoned to his aid in 1677 a band of Highlanders, who were sent into the western country. In consequence, a large party of Scottish nobles went to London, made common cause with the English Country Faction, and compelled Charles to order the disbandment of the marauders. In May 1678 another demand made in the Commons for Lauderdale's removal was defeated due to court influence, by a margin of only a single vote.[3]

He maintained his triumphs almost to the end. In Scotland, which he visited immediately after this victory in the Parliament of England, he overbore all opposition to the king's demands for money. Another address for his removal from the Commons in England was suppressed by the dissolution of parliament on 26 May 1679, and a renewed attack upon him, by the Scottish party and Shaftesbury's faction combined, also failed. Later that summer on 22 June 1679 the last attempt of the Covenanters was suppressed at the Battle of Bothwell Brig.[4]

Following a stroke or heart attack early in 1680,[citation needed] his health and abilities failed leading Lauderdale to resign in October that year the place and power for which he had so long successfully struggled. His vote given for the execution of Lord Stafford on 29 November incurred the displeasure of the Duke of York.[4] 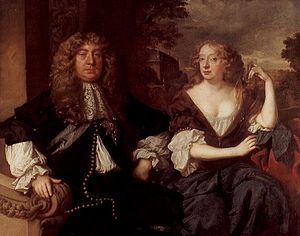 Lauderdale's first marriage was to Lady Anne Home, daughter of Alexander Home, 1st Earl of Home, by whom he had one daughter.[4] Prior to her death it is strongly suspected that Elizabeth Maitland, Duchess of Lauderdale, daughter of William Murray, 1st Earl of Dysart and now widow of Sir Lionel Tollemache, became his mistress,[5] and they subsequently married in 1672 upon Lady Anne's death. He left no male heir, consequently his dukedom and his English titles became extinct, but he was succeeded in the earldom by his brother Charles Maitland, 3rd Earl of Lauderdale.[4]