John Herrick McIntire (June 27, 1907 – January 30, 1991) was an American character actor[1] who appeared in sixty-five theatrical films and many more television series. McIntire is most well known for replacing Ward Bond, upon Bond's sudden death, in the starring role on NBC-TV's Wagon Train as the second trail master, Christopher Hale, a role he played from early 1961 to the series' ending in 1965. He also replaced Charles Bickford, upon Bickford's abrupt death in 1967, as Bickford's character's brother Clay Grainger, one of the three starring roles in NBC-TV's The Virginian, for four seasons.

John McIntire was born in Spokane, Washington and is of Irish descent. He grew up around ranchers, an experience that would later inspire his performances in dozens of film and television westerns. A graduate of USC, McIntire began acting in radio on Tarzan and the Diamond of Asher, where he met his future wife, Jeanette Nolan. McIntire worked on countless Suspense radio programs from the early 1940s. He was the voice in the radio program The March of Time, and then on stage before he embarked on a lengthy film and television career as a character actor. He was already 40 when he made his big-screen debut in 1947, but went on to appear in some 65 films, often playing police chiefs, judges, eccentric loners or other western characters.[citation needed]

His films included the film noir classic The Asphalt Jungle (1950), the 1960 Hitchcock thriller Psycho and the 1960 drama Elmer Gantry starring Burt Lancaster, but some of his more memorable roles were in westerns such as the acclaimed Winchester '73 (1950) and The Far Country (1955), both with James Stewart, and The Tin Star (1957) with Henry Fonda.

McIntire actually received top billing for perhaps his best film role, as a crusading politician in The Phenix City Story (1955), even though he played a supporting part.

In the mid-1950s, McIntire moved into television, appearing in anthology series, sitcoms and dramas. He guest-starred as Judson in the episode "Chinese Invasion" of NBC's western series Cimarron City, with George Montgomery and John Smith.[2] 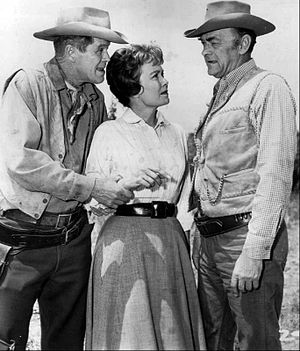 McIntire procured a regular role on ABC's Naked City, before his character was killed off. McIntire was cast from January to May 1961 in the supporting role of Pa Canfield in the NBC American Civil War drama The Americans, starring Darryl Hickman and Richard Davalos as brothers who fight on opposites of the conflict.

Though McIntire had never played the lead in a theatrical film, television provided him with his most prominent and long-running role when in 1961 he replaced the late Ward Bond in the popular NBC/ABC series Wagon Train, playing trailmaster Chris Hale in more than 150 episodes between 1961 and 1965. His co-stars were Robert Horton, Robert Fuller, Denny Scott Miller, Terry Wilson, Frank McGrath, and Michael Burns.

In 1960, McIntire guest-starred as William Palmer in the series finale, "The Most Dangerous Gentleman", of the short-lived NBC western Overland Trail, starring William Bendix and Doug McClure, his subsequent co-star on The Virginian. In 1967, he guest-starred in an episode of CBS's Dundee and the Culhane.

McIntire replaced actor Charles Bickford (who had himself replaced Lee J. Cobb) on NBC's The Virginian in 1967 when Bickford abruptly died, playing the brother of Bickford's character for four seasons, a major recurring leading role in a weekly 90-minute Western television series similar in size and scope to his earlier work on Wagon Train, which had begun after the sudden death of series lead Ward Bond.

He played the supporting role of Judge Parker in Rooster Cogburn (1975), the sequel to True Grit starring John Wayne and Katharine Hepburn. His final film role was in Turner & Hooch (1989).

Marriage and work with wife

In 1935, McIntire married actress Jeanette Nolan, and the couple had two children together, one of whom was the actor Tim McIntire (1944–1986) who starred in the 1978 film American Hot Wax. McIntire and Nolan both appeared in Psycho. He played a sheriff, while she voiced some of the "mother" lines. In the Wagon Train episode "The Janet Hale Story" McIntire and Nolan played husband and wife Chris and Janet Hale. In The Virginian, they again played husband and wife.

McIntire and Nolan also worked together as voice actors. In a 1969 KCET television reading of Norman Corwin's 1938 radio play The Plot to Overthrow Christmas, McIntire played the Devil and Nolan played Lucrezia Borgia. In 1977 they appeared in the Disney animated film The Rescuers, in which he voiced the cat Rufus and she the muskrat Ellie Mae. Four years later, the couple worked on another Disney film, The Fox and the Hound, with McIntire as the voice of Mr. Digger, a badger, and Nolan as the voice of Widow Tweed.[citation needed]

John McIntire died on January 30, 1991 from emphysema and lung cancer in Pasadena, California. Aside from Nolan, he was also survived by their daughter, Holly. McIntire and Nolan's son, actor/musician Tim McIntire, predeceased his parents, dying in 1986 from heart problems.[3]