Sir John Mills CBE (born Lewis Ernest Watts Mills; 22 February 1908 – 23 April 2005)[1] was an English actor who appeared in more than 120 films in a career spanning seven decades. He excelled on camera as an appealing British everyman who often portrayed guileless, wounded war heroes. In 1971, he received the Academy Award for Best Supporting Actor for his performance in Ryan's Daughter.

For his work in film Mills was knighted by Elizabeth II in 1976. In 2002, he received a BAFTA Fellowship from the British Academy of Film and Television Arts and was named a Disney Legend by The Walt Disney Company.

John Mills was born on 22 February 1908 in North Elmham, Norfolk,[1] the son of Edith Mills (née Baker), a theatre box office manager, and Lewis Mills, a mathematics teacher.[2] Mills was born at Watts Naval School, where his father was a master. He spent his early years in the village of Belton where his father was the headmaster of the village school. He first felt the thrill of performing at a concert in the school hall when he was six years old.[3] He lived in a modest house in Gainsborough Road, Felixstowe until 1929. His elder sister was Annette Mills, remembered as presenter of BBC Television's Muffin the Mule (1946–55).

He was educated at Balham Grammar School in London, Sir John Leman High School in Beccles, Suffolk and Norwich High School for Boys,[1][4] where it is said that his initials can still be seen carved into the brickwork on the side of the building in Upper St Giles Street. Upon leaving school he worked as a clerk[2] at a corn merchant's in Ipswich before finding employment in London as a commercial traveller for the Sanitas Disinfectant Company.

In September 1939, at the start of the Second World War, Mills enlisted in the British Army, joining the Royal Engineers.[5] He was later commissioned as a Second Lieutenant, but in 1942 he received a medical discharge because of a stomach ulcer.[5]

Mills took an early interest in acting, making his professional début at the London Hippodrome in The Five O'Clock Girl in 1929. He followed this with a cabaret act.

Mills then got a job with a theatrical company that toured India, China and the Far East performing a number of plays. Noël Coward saw him appear in a production of Journey's End in Singapore and wrote Mills a letter of introduction to use back in London.[6]

He made his film debut in The Midshipmaid (1932). He also appeared in The Ghost Camera (1933) with Ida Lupino and Britannia of Billingsgate (1934).

Mills starred in The Green Cockatoo (1937) directed by William Cameron Menzies. He appeared as Colley in the hugely popular 1939 film version of Goodbye, Mr Chips, opposite Robert Donat.

He was in Men in Shadow (1942) on stage, written by his wife. He achieved acclaim for his performance as an able seaman in Noël Coward's In Which We Serve (1942), a huge hit. Mills had another good support role in The Young Mr. Pitt (1942) playing William Wilberforce opposite Robert Donat. He was invalided out of the army in 1942.[7]

Mills's climb to stardom began when he had the lead role in We Dive at Dawn (1943), a film directed by Asquith about submariners. He was top billed in This Happy Breed (1944), directed by David Lean and adapted from a Noël Coward play.

Also popular was Waterloo Road (1945), from Sidney Gilliat, in which Mills played a man who goes AWOL to retrieve his wife from a draft-dodger (played by Stewart Granger). Mills played a pilot in The Way to the Stars (1945), directed by Asquith from a script by Terence Rattigan, and another big hit in Britain. He did Duet for Two Hands (1945) on stage.

Mills had his greatest success to date as Pip in Great Expectations (1946), directed by David Lean. It was the third biggest hit at the British box office that year and Mills was voted the sixth most popular star.[8]

Less successful critically and financially was So Well Remembered (1947) which used American writers and directors.[9] The October Man (1947) was a mildly popular thriller from Roy Ward Baker.

Mills played the title role in Scott of the Antarctic (1948), a biopic of Captain Scott. It was the fourth most watched film of the year in Britain and Mills was the eighth biggest star.[10]

Mills turned producer with The History of Mr Polly (1949) from the novel by H. G. Wells.[11] It was directed by Anthony Pelissier and Mills said it was his favorite film.[12] Pelisse also made The Rocking Horse Winner (1949) which Mills produced; he also played a small role. More liked at the box office was a submarine drama, Morning Departure (1950), directed by Baker. By this stage his fee was a reported £20,000 a film.[13]

After Morning Departure Mills took almost two years off.[14] The films he made on his return were not popular: a thriller, Mr Denning Drives North (1951); The Gentle Gunman (1952), where he and Dirk Bogarde played IRA gunmen for Basil Dearden; The Long Memory (1953), a thriller from Robert Hamer.[15] 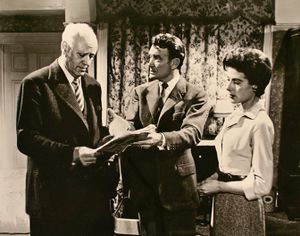 Mills (middle) with Alastair Sim and Yvonne Mitchell in Escapade (1955)

Mills had his first hit in a number of years with Hobson's Choice (1954), directed by Lean. He appeared in the war film The Colditz Story (1955).

Mills played a supporting role in a movie for MGM, The End of the Affair (1955), with Deborah Kerr and Van Johnson. More liked in Britain was another war story, Above Us the Waves (1955); this was sixth most popular film at the British box office that year, and helped Mills become the fifth most popular star in the country.[16]

In the 1959 crime drama Tiger Bay, directed by Thompson, Mills played a police detective investigating a murder that a young girl has witnessed. His daughter Hayley was cast, and earned excellent reviews.

Mills went to Australia to play a cane cutter in the Hollywood financed Summer of the Seventeenth Doll (1959).

Walt Disney saw Tiger Bay and offered Hayley Mills the lead role in Pollyanna (1960). Disney also offered John Mills the lead in the adventure film Swiss Family Robinson (1960), which was a huge hit. He did Ross (1960–61) on stage.

The Rank Organisation insisted Mills play the role of the priest in The Singer Not the Song (1961) opposite Dirk Bogarde. Mills and Baker reteamed on an interracial drama Flame in the Streets (1961) and an Italian-British war film The Valiant (1962).

Mills did a comedy with James Mason, Tiara Tahiti (1962). He had a support role in The Chalk Garden (1964) starring Hayley.

After a cameo on the war film Operation Crossbow (1965), Mills made a third film with his daughter, The Truth About Spring (1965). He had a cameo in King Rat (1965) for Bryan Forbes, who then directed Mills in The Wrong Box (1966). Mills played Hayley's father-in-law on screen in The Family Way (1966). He then directed her in Sky West and Crooked (1966) from a script written by his wife.

He was the subject of This Is Your Life on two occasions, firstly in 1960 when he was surprised by Eamonn Andrews outside Pinewood Studios,[citation needed] and again in 1983 when Eamonn surprised him on the stage of London's Wyndham's Theatre at the curtain call of the play Little Lies.[citation needed]

Mills began to move into character roles, supporting Hugh O'Brian in Africa Texas Style (1967) and Rod Taylor in Chuka (1967). He went to Italy for a giallo, A Black Veil for Lisa (1968) and played William Hamilton in Emma Hamilton (1968).

Mills had a cameo in Oh! What a Lovely War (1969) for director Richard Attenborough and supported Mark Lester (though he was top billed) in Run Wild, Run Free (1969). He went to Australia to star in a convict drama, Adam's Woman (1970).

For his role as the village idiot in Ryan's Daughter (1970) — a complete departure from his usual style – Mills won a Best Supporting Actor Oscar.

Also on the small screen, in 1974 he starred as Captain Tommy "The Elephant" Devon in the six-part television drama series The Zoo Gang, about a group of former underground freedom fighters from World War II, with Brian Keith, Lilli Palmer and Barry Morse.

His most famous television role was probably as the title character in Quatermass for ITV in 1979. He followed this with a sitcom in Young at Heart (1980–82).

In 1986 he did The Petition at the National and the following year did Pygmalion on Broadway. He provided a voice for When the Wind Blows (1986) and supported Madonna in Who's That Girl (1987). His best roles were on TV in Harnessing Peacocks (1993) and Martin Chuzzlewit (1994). Mills also starred as Gus: The Theatre Cat in the filmed version of the musical Cats in 1998.

In 2000, Mills released his extensive home cine-film footage in a documentary film entitled Sir John Mills's Moving Memories, with interviews with Mills, his children Hayley, Juliet and Jonathan and Richard Attenborough. The film was produced and written by Jonathan Mills, directed and edited by Marcus Dillistone, and features behind the scenes footage and stories from films such as Ice Cold in Alex and Dunkirk. In addition the film also includes home footage of many of Mills's friends and fellow cast members including Laurence Olivier, Harry Andrews, Walt Disney, David Niven, Dirk Bogarde, Rex Harrison and Tyrone Power. He portrayed a charming old gent as head of an art museum in the 1997 Mr. Bean. Mills's last cinema appearance was playing a tramp in Lights 2 (directed by Marcus Dillistone); the cinematographer was Jack Cardiff. They had last worked together on Scott of the Antarctic in 1948.

The Wick on Richmond Hill in Richmond, Greater London, was the family home for many years

His first wife was the actress Aileen Raymond, who died only five days after he did. They were married in 1932 and divorced in 1941. Raymond later became the mother of actor Ian Ogilvy.

His second wife was the dramatist Mary Hayley Bell. Their marriage, on 16 January 1941, lasted for 64 years until his death in 2005. They were married in a rushed civil ceremony, because of the war; it was not until sixty years later that they were married in a church.[20] They lived in The Wick, London, for many years. They sold the house to musician Ronnie Wood in 1971 and moved to Hills House, Denham, south Buckinghamshire.

Mills and Bell had two daughters, Juliet, star of television's Nanny and the Professor and Hayley, a Disney child star who appeared in Pollyanna, The Parent Trap and Whistle Down the Wind, and one son, Jonathan Mills, a screenwriter.[2] In 1947, Mills appeared with his daughters in the film So Well Remembered. The three also appeared together decades later, on an episode of ABC's The Love Boat. Mills's grandson by Hayley, Crispian Mills, is a musician, best known for his work with the raga rock group Kula Shaker.

In the years leading up to his death, he appeared on television only on special occasions, his sight having failed almost completely by 1992. After that, his film roles were brief cameos.

In 1999, at 91 years of age, Mills became the oldest joining member of the entertainment charitable fraternity, the Grand Order of Water Rats.[21]

In 2002, he received a Fellowship of the British Academy of Film and Television Arts (BAFTA), their highest award, and was named a Disney Legend by the Walt Disney Company.

For a number of years, British film exhibitors voted him among the top ten British stars at the box office via an annual poll in the Motion Picture Herald.