Lieutenant-General Sir John Moore, KB, (13 November 1761 – 16 January 1809) was a British soldier and General, also known as Moore of Corunna. He is best known for his military training reforms and for his death at the Battle of Corunna, in which he defeated (Sarrazin 1815, pp. 358–359) a French army under Marshal Soult during the Peninsular War. After the war General Sarrazin wrote a French history of the battle, which nonetheless may have been written in light of subsequent events, he continued "Whatever Buonaparte may assert, Soult was most certainly repulsed at Corunna; and the English gained a defensive victory, though dearly purchased with the loss of their brave general Moore, who was alike distinguished for his private virtues, and his military talents."[lower-alpha 1]

John Moore was born in Glasgow, the son of John Moore, a doctor and writer, and the older brother of Admiral Sir Graham Moore. He attended Glasgow High School, but at the age of eleven joined his father and Douglas, the young 16-year-old 8th Duke of Hamilton, (1756–1799), his father's pupil, on a grand tour of France, Italy and Germany. This included a two-year stay in Geneva, where Moore's education continued. 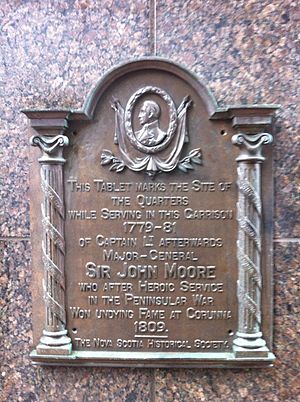 He joined the British Army in 1776 as an ensign in the 51st Regiment of Foot then based in Minorca. He first saw action in 1778 during the American War of Independence as a lieutenant in the 82nd Regiment of Foot, which was raised in Lanarkshire for service in North America by 8th Duke of Hamilton. From 1779-1781 he was garrisoned at Halifax, Nova Scotia. In 1779, he distinguished himself in action during the Penobscot Expedition in present-day Maine, when a small British detachment held off a much larger rebel American force until reinforcements arrived.

After the war, in 1783, he returned to Britain and in 1784 was elected to Parliament as the Member for Lanark Burghs, a seat he held until 1790.

In 1787, he was made Major and joined the 60th briefly before returning to the 51st. In 1791 his unit was assigned to the Mediterranean and he was involved in campaigning in Corsica and was wounded at Calvi. He was given a Colonelcy and became Adjutant-General to Sir Charles Stuart. Friction between Moore and the new British viceroy of Corsica led to his recall and posting to the West Indies under Sir Ralph Abercromby in 1796. Moore played a leading role in the British reconquest of St. Lucia, which at the time had been occupied by a group of slave rebels under the nominal control of the local French Republican administrator Victor Hugues. He participated in British efforts to repress the slave rebels until falling ill of yellow fever, upon which he returned to Britain.[2] 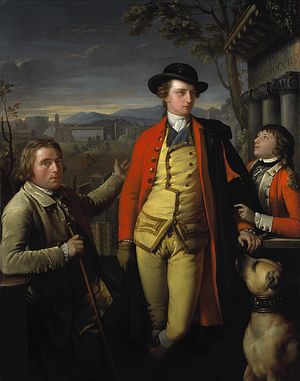 Moore's father, the 8th Duke of Hamilton, and a young John Moore, painted in Rome by Gavin Hamilton, 1775-6

In 1798, he was made Major-General and served in the suppression of the republican rebellion raging in Ireland. His personal intervention was credited with turning the tide at the battle of Foulksmills on 20 June and he regained control of Wexford town before the ruthless General Lake, thereby possibly preventing its sacking. Although the rebellion was crushed with great brutality, Moore stood out from most other commanders for his humanity and refusal to perpetrate atrocities.

In 1799, he commanded a brigade in the expedition to Egmont-op-Zee, where the British force was badly defeated and he himself was seriously injured. He recovered to lead the 52nd regiment during the British campaign in Egypt against the French, having become colonel of that regiment in 1801 on the death of General Cyrus Trapaud.[3]

He returned to Great Britain in 1803 to command a brigade at Shorncliffe Army Camp near Folkestone, where he established the innovative training regime that produced Britain's first permanent light infantry regiments. He had a reputation as an exceptionally humane leader and trainer of men; it is said that when new buildings were being constructed at the camp and the architect asked him where the paths should go, he told him to wait some months and see where the men walked, then put the paths there. Sir John Moore Barracks at Winchester, home of the Army Training Regiment, is called after him. Sir Arthur Bryant wrote, "Moore's contribution to the British Army was not only that matchless Light Infantry who have ever since enshrined his training, but also the belief that the perfect soldier can only be made by evoking all that is finest in man - physical, mental and spiritual".

When it became clear that Napoleon was planning an invasion of Britain, Moore was put in charge of the defence of the coast from Dover to Dungeness. It was on his initiative that the Martello Towers were constructed (complementing the already constructed Shorncliffe Redoubt), following a pattern he had been impressed with in Corsica, where the prototype tower, at Mortella Point, had offered a stout resistance to British land and sea forces. He also initiated the cutting of the Royal Military Canal in Kent and Sussex, and recruited about 340,000 volunteers to a militia that would have defended the lines of the South Downs if an invading force had broken through the regular army defences. In 1804 Moore was knighted and promoted to Lieutenant-General. In 1806 he returned to active duty in the Mediterranean and then in 1808 in the Baltic to assist the Swedish. Disagreements with Gustavus IV led to his being soon sent home where he was ordered to Portugal.

Moore took command of the British forces in the Iberian peninsula following the recall of Harry Burrard of Lymington (1 June 1755 –17 October 1813), Hew Dalrymple (1750–1830), Governor of Gibraltar from November 1806 to August 1808, and Arthur Wellesley (1769–1852), later Duke of Wellington, who all faced an inquiry over the Convention of Cintra on the French troops' evacuation from Portugal. When Napoleon arrived in Spain with 200,000 men, Moore drew the French northwards while retreating to his embarkation ports of A Coruña and Vigo. Moore established a defensive position on hills outside the town, while being guarded by the 15th Hussars, and was fatally wounded at the Battle of Corunna, being "struck in his left breast and shoulder by a cannon shot, which broke his ribs, his arm, lacerated his shoulder and the whole of his left side and lungs".[4] He remained conscious, and composed, throughout the several hours. Like Lord Nelson he was mortally wounded in battle, surviving long enough to be assured that he had gained a victory. He said to his old friend Colonel Anderson "You know I always wished to die this way, I hope the people of England will be satisfied! I hope my country will do me justice!".[5] He asked Colonel Anderson to speak to his friends and mother but became too emotional to continue, and changed the subject.[5][lower-alpha 2] He asked if his staff were safe and was assured that they were,[lower-alpha 3]and where his will could be found. Casting his eyes around the room he spied Charles Banks Stanhope and asked him "Remember me to your sister, Stanhope".[6][lower-alpha 4] He was then silent and died shortly afterwards.[8]

Moore was buried wrapped in a military cloak in the ramparts of the town. Moore's funeral was commemorated in the poem "The Burial of Sir John Moore after Corunna" by Charles Wolfe (1791–1823), which became popular in 19th century poetry anthologies.[9] The first verse runs: 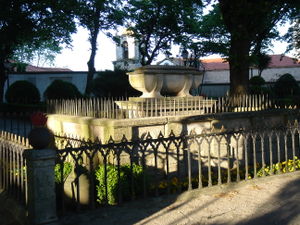 Moore's tomb in San Carlos Garden at A Coruña

Not a drum was heard, not a funeral note,

As his corse to the rampart we hurried;

Not a soldier discharged his farewell shot

O'er the grave where our hero we buried.

and ends, six verses later, with:

Slowly and sadly we laid him down,

From the field of his fame fresh and gory;

We carved not a line, and we raised not a stone,

But we left him alone with his glory.

When the French took the town, a monument was built over his grave by the orders of Marshal Soult. The monument was rebuilt and made more permanent in 1811. In his native Glasgow he is commemorated by a statue in George Square, and in England by a monument in St Paul's Cathedral. Houses are named for him at The High School of Glasgow and HM Queen Victoria School, Dunblane.