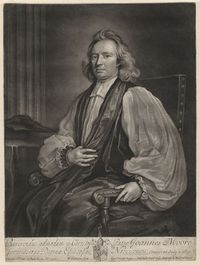 Bishop John Moore was descended from the ancient family of De La Moor (later Moore), of Moorhayes, Cullompton, Devonshire, England. His paternal grandfather was the cleric and author John Moore (1595?–1657), whose son Thomas (1621–1686) became an ironmonger of Market Harborough in Leicestershire, and married Elizabeth, daughter of Edward Wright of Sutton, in the parish of Broughton, Leicestershire, and was John Moore's father.[1]

Moore was born in Market Harborough and was educated at Clare Hall, Cambridge where he subsequently became a Fellow in 1667.[2] Rector of Blaby in Leicestershire from 1676 to 1687, he subsequently became Rector of St Ann's, Westminster and St Andrew, Holborn. By 1670 he was in the household of Heneage Finch, and served as his chaplain. He supported the Glorious Revolution and was appointed a Royal Chaplain.

Moore was appointed Bishop of Norwich in 1691. He was a Whig in politics, and supported the low church party. He gave practical support to leading theologians, such as Richard Bentley, Gilbert Burnet, and John Strype; and he found preferment for Samuel Clarke, William Whiston (whose undergraduate study he subsidised), and Samuel Knight.[3]

Moore was translated to the see of Ely in 1707. When it was proposed that Bentley should be appointed bishop of Chichester (1709), the support of Moore was enlisted on his behalf. As visitor of Trinity College, Cambridge, he presided at the trial of Bentley; during the sessions at Ely House, London, he caught cold. He died in Ely on 31 July 1714 and was buried in the Cathedral.[3]

At the time of his death in 1714, Moore's collection of books and papers contained over 30,000 items, and may have been the largest in England. To celebrate his coronation, King George I caused it to be purchased intact, at a cost of 6,000 guineas, and donated to Cambridge University Library. Moore's library alone contained nearly twice the material in the existing University library. While some material has been removed over the years, the gift is still largely intact, and is called The Royal Library in honour of its patron. Notable books in his library include the Book of Deer and the Treatise of Love.[4]

The Coat of Arms of Moore of Moorhayes, Cullompton, Devon, can be seen in both Norwich and Ely Cathedrals.