John Murray is an English publisher, known for the authors it has published in its history, including Jane Austen, Sir Arthur Conan Doyle, Lord Byron, Charles Lyell, Johann Wolfgang von Goethe, Herman Melville, Edward Whymper, and Charles Darwin. Since 2004, it has been owned by conglomerate Lagardère under the Hachette UK brand. 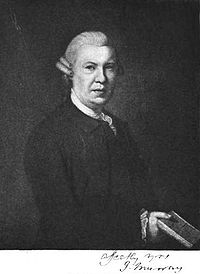 The business was founded in London in 1768 by John Murray I (1745–1793), an Edinburgh-born Royal Marines officer, who built up a list of authors including Isaac D'Israeli and published the English Review.[1]

John Murray the elder was one of the founding sponsors of the London evening newspaper The Star in 1788.[2]

He was succeeded by his son, John Murray II, who made the publishing house one of the most important and influential in Britain. He was a friend of many leading writers of the day and launched the Quarterly Review in 1809. He was the publisher of Jane Austen, Sir Walter Scott, Washington Irving, George Crabbe and many others. His home and office at 50 Albemarle Street in Mayfair was the centre of a literary circle, fostered by Murray's tradition of "Four o'clock friends", afternoon tea with his writers.

Murray's most notable author was Lord Byron, who became a close friend and correspondent of his. Murray published many of his major works, paying him over £20,000 in rights. On 10 March 1812 Murray published Byron's second book, Childe Harold's Pilgrimage, which sold out in five days, leading to Byron's observation "I awoke one morning and found myself famous".

On 17 May 1824 Murray participated in one of the most notorious acts in the annals of literature. Byron had given him the manuscript of his personal memoirs to publish later on. Together with five of Byron's friends and executors, he decided to destroy Byron's manuscripts because he thought the scandalous details would damage Byron's reputation. Opposed only by Thomas Moore, the two volumes of memoirs were dismembered and burnt in the fireplace at Murray's office.[3] Unfortunately we do not know what was contained in the memoirs.

John Murray III (1808–1892) continued the business and published Charles Eastlake's first English translation of Goethe's Theory of Colours (1840), David Livingstone's Missionary Travels (1857), and Charles Darwin's Origin of Species (1859). Murray III contracted with Herman Melville to publish Melville's first two books, Typee (1846) and Omoo (1847) in England; both books were presented as nonfiction travel narratives in Murray's Home and Colonial Library series, alongside such works as the 1845 second edition of Darwin's journals from his travels on the HMS Beagle.[4] John Murray III also started the Murray Handbooks in 1836, a series of travel guides from which modern-day guides are directly descended. The rights to these guides were sold around 1900 and subsequently acquired in 1915 by the Blue Guides.

In 2002, John Murray was acquired by Hodder Headline, which was itself acquired in 2004 by the French conglomerate Lagardère Group. Since then, it has been an imprint under Lagardère brand Hachette UK.[5]

The archive of John Murray Publishers, from 1768 through to 1920, was offered for sale to the nation by John Murray VII for £31 million and the National Library of Scotland has acquired it, including the manuscript of Charles Darwin's Origin of Species. On 26 January 2005, it was announced that the National Library was to be given £17.7m by the Heritage Lottery Fund towards the £31.2m price offered by John Murray (on condition the library digitise the materials and make them openly available). The Scottish Executive agreed to make a contribution of £8.3m, with the National Library setting a £6.5m fundraising target for the remainder.[6][7][8][9][10]