John Newton Mitchell (September 15, 1913 – November 9, 1988) was the Attorney General of the United States from 1969 to 1972 under President Richard Nixon. Prior to that, he had been a municipal bond lawyer, director of Nixon's 1968 presidential campaign, and one of Nixon's closest personal friends. After his tenure as Attorney General, he served as director of Nixon's 1972 presidential campaign. Due to his involvement in the Watergate affair, Mitchell was sentenced to prison in 1977 and served 19 months. As Attorney General, he was noted for personifying the "law-and-order" positions of the Nixon administration, amid several high-profile anti-war demonstrations.

Mitchell was born in Detroit, Michigan, to Margaret (McMahon) and Joseph C. Mitchell.[1] He grew up on Long Island in New York. He earned his law degree from Fordham University School of Law and was admitted to the New York bar in 1938. He served for three years as a naval officer (Lieutenant, Junior Grade) during World War II where he was a PT boat commander.

Except for his period of military service, Mitchell practiced law in New York City from 1938 until 1969 and earned a reputation as a successful municipal bond lawyer.

Mitchell's second[clarification needed] wife, Martha, became a controversial figure in her own right, gaining notoriety for her late-night phone calls to reporters in which she accused President Nixon of participating in the Watergate cover-up and alleged that Nixon and several of his aides were trying to make her husband the scapegoat for the whole affair.

Mitchell devised a type of revenue bond called a "moral obligation bond" while serving as bond counsel to New York’s Governor Nelson Rockefeller in the 1960s. In an effort to get around the voter approval process for increasing state and municipal borrower limits, Mitchell attached language to the offerings that was able to communicate the state's intent to meet the bond payments while not placing it under a legal obligation to do so.[2] Mitchell did not dispute when asked in an interview if the intent of such language was to create a "form of political elitism that bypasses the voter's right to a referendum or an initiative."[2][3] 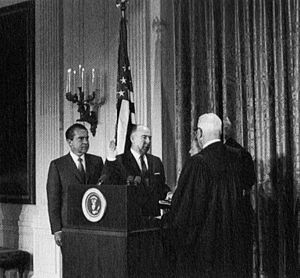 Mitchell is sworn in as Attorney General of the United States, January 22, 1969. Chief Justice Earl Warren administers the oath while President Richard Nixon looks on. 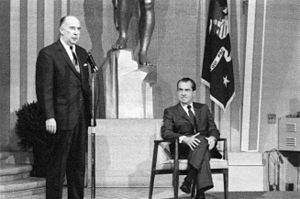 Attorney General Mitchell speaks to employees of the Justice Department, January 30, 1969. To his left is President Richard Nixon.

During his successful 1968 campaign, Nixon turned over the details of the day-to-day operations to Mitchell. Allegedly Mitchell also played a central role in covert attempts to sabotage the 1968 Paris Peace Accords which could have ended the Vietnam War.[5][6][7][8][9][10] After he became president in January 1969, Nixon appointed Mitchell attorney general while making an unprecedented direct appeal to FBI Director J. Edgar Hoover that the usual background investigation not be conducted.[11] Mitchell remained in office from 1969 until he resigned in 1972 to manage President Nixon's successful reelection campaign.

Will Wilson, a former conservative Democratic attorney general of Texas who switched to the Republican Party to support Nixon, was named United States Assistant Attorney General in charge of the Criminal Division. He served from 1969 to 1971. Wilson wrote the book A Fool For a Client, a study of the fall of President Nixon.[12] Mitchell believed that the government's need for "law and order" justified restrictions on civil liberties. He advocated the use of wiretaps in national security cases without obtaining a court order (United States v. U.S. District Court) and the right of police to employ the preventive detention of criminal suspects. He brought conspiracy charges against critics of the Vietnam War, likening them to brown shirts of the Nazi era.

Mitchell expressed a reluctance to involve the Justice Department in some civil rights issues. "The Department of Justice is a law enforcement agency," he told reporters. "It is not the place to carry on a program aimed at curing the ills of society." However, he also warned activists, "watch what we do, not what we say."

Near the beginning of his administration, Nixon had ordered Mitchell to go slow on desegregation of schools in the South as part of Nixon's "Southern Strategy". After being instructed by the Federal courts that segregation was unconstitutional and that the Executive Branch was supposed to enforce the rulings of the Courts, Mitchell somewhat reluctantly began to comply, threatening to withhold Federal funds from those school systems that were still segregated, as well as threatening legal action against them.

School segregation had been struck down as unconstitutional by a unanimous Supreme Court decision in 1954 (Brown v. Board of Education), but in 1955, the Court ruled that desegregation need be accomplished only with "all deliberate speed," [13] which many Southern states interpreted as an invitation to delay, and it was not until 1969 that the Supreme Court renounced the "all deliberate speed" rule and declared that further delay in accomplishing desegregation was no longer permissible.[14] As a result, some 70% of black children were still attending segregated schools in 1968.[15] By 1972, this percentage had decreased to 8%. Enrollment of black children in desegregated schools rose from 186,000 in 1969 to 3 million in 1970.[16]

From the outset, the new Attorney General strove to suppress what many Americans saw as major threats to their safety: urban crime, black unrest, war resistance. He called for no-knock entry and no-warrant frisking and wiretapping, preventive detention, the use of Federal troops to repress crime in the capital, a restructured Supreme Court and a slowdown in school desegregation.

"This country is going so far to the right you won't recognize it," he told a reporter.

In an early sample of the dirty tricks that would later mark the 1971-72 campaign, Mr. Mitchell approved a $10,000 subsidy to employ an American Nazi faction in a bizarre effort to get Governor Wallace off the ballot in California. The move failed.[1]

In 1972, when asked to comment about a forthcoming article that reported that he controlled a political slush fund used for gathering intelligence on the Democrats, he famously uttered an implied threat to reporter Carl Bernstein: "Katie Graham's gonna get her tit[17] caught in a big fat wringer if that's published."[18] 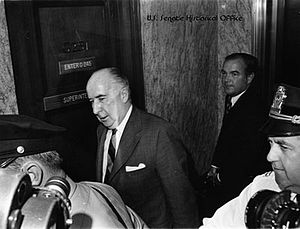 Mitchell's name was mentioned in a deposition concerning Robert L. Vesco, an international financier who was a fugitive from a federal indictment. Mitchell and Nixon Finance Committee Chairman Maurice H. Stans were indicted in May 1973 on federal charges of obstructing an investigation of Vesco after he made a $200,000 contribution to the Nixon campaign.[19] In April 1974, both men were acquitted in a New York federal district court.[20]

On February 21, 1975, Mitchell, who was represented by the criminal defense attorney William G. Hundley, was found guilty of conspiracy, obstruction of justice, and perjury and sentenced to two and a half to eight years in prison for his role in the Watergate break-in and cover-up, which he dubbed the "White House horrors". As a result of the conviction, Mitchell was disbarred from the practice of law in New York.[21] The sentence was later reduced to one year to four years by United States district court Judge John J. Sirica. Mitchell served only 19 months of his sentence, at Maxwell Air Force Base in Montgomery, Alabama, a minimum-security prison, before being released on parole for medical reasons.[22] Tape recordings made by President Nixon and the testimony of others involved confirmed that Mitchell had participated in meetings to plan the break-in of the Democratic Party's national headquarters in the Watergate Hotel.[citation needed] In addition, he had met, on at least three occasions, with the president in an effort to cover up White House involvement after the burglars were discovered and arrested.[citation needed] 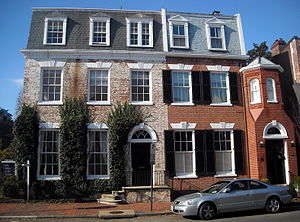 One of Mitchell's former residences (left) in Georgetown, Washington, D.C.

Around 5:00 PM on November 9, 1988, Mitchell collapsed from a heart attack on the sidewalk in front of 2812 N St., N.W., Georgetown, Washington, D.C.. That evening, he died at George Washington University Hospital. He was buried with full military honors at Arlington National Cemetery based both on his World War II Naval service and his former cabinet post of Attorney General.

In a column on Mitchell's death, William Safire wrote, "His friend Richard Moore, in a eulogy, noted that near Mitchell's grave in Arlington National Cemetery was the headstone of Colonel Gregory "Pappy" Boyington, a Medal of Honor recipient, who used to call Mitchell yearly to thank him for saving his life." Safire also said of Mitchell: "He never spoke of his war record; exploiting his medals would have been out of character."