From Infogalactic: the planetary knowledge core
Jump to: navigation, search
For other people with the same name, see John Napier (disambiguation).

John Napier of Merchiston (/ˈneɪpɪər/;[1] 1550 – 4 April 1617; also signed as Neper, Nepair; nicknamed Marvellous Merchiston) was a Scottish landowner known as a mathematician, physicist, and astronomer. He was the 8th Laird of Merchiston. His Latinized name was Joannes Neper.

John Napier is best known as the inventor of logarithms. He also invented the so-called "Napier's bones" and made common the use of the decimal point in arithmetic and mathematics.

Napier's birthplace, Merchiston Tower in Edinburgh, Scotland, is now part of the facilities of Edinburgh Napier University. After his death, at home at Merchiston Castle, from the effects of gout, Napier's remains were buried in the churchyard of St Giles Cathedral but, following the loss of the graveyard there to build the Law Courts, he was memorialised at St Cuthbert's Church at the west side of Edinburgh.[2] 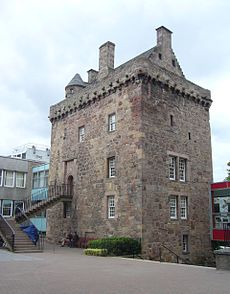 Napier's father was Sir Archibald Napier of Merchiston Castle, and his mother was Janet Bothwell, daughter of the politician and judge Francis Bothwell, Lord of Session, and a sister of Adam Bothwell who became the Bishop of Orkney. Archibald Napier was 16 years old when John Napier was born. 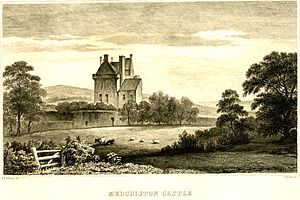 Merchiston Castle from an 1834 woodcut

As was the common practice for members of the nobility at that time, he was privately tutored and did not have formal education until he was 13, when he was sent to St Salvator's College, St Andrews.[3] He did not stay in college very long. It is believed that he dropped out of school in Scotland and perhaps travelled in mainland Europe to better continue his studies. Little is known about those years, where, when, or with whom he might have studied, although his uncle Adam Bothwell wrote a letter to John's father on 5 December 1560, saying "I pray you, sir, to send John to the schools either to France or Flanders, for he can learn no good at home", and it is believed that this advice was followed.

In 1571, Napier, aged 21, returned to Scotland, and bought a castle at Gartness in 1574. On the death of his father in 1608, Napier and his family moved into Merchiston Castle in Edinburgh, where he resided the remainder of his life. 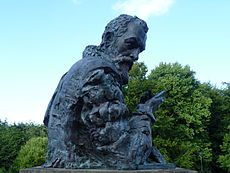 Bust of Napier, holding his 'bones', at the Craighouse Campus of Napier University, Edinburgh 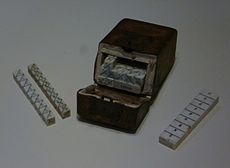 An ivory set of Napier's Bones from around 1650 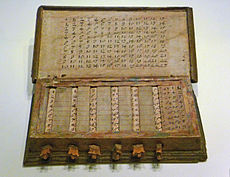 A set of Napier's calculating tables from around 1680

His work, Mirifici Logarithmorum Canonis Descriptio (1614) contained fifty-seven pages of explanatory matter and ninety pages of tables of numbers related to natural logarithms (see Napierian logarithm). The book also has an excellent discussion of theorems in spherical trigonometry, usually known as Napier's Rules of Circular Parts. Modern English translations of both Napier's books on logarithms, and their description can be found on the web, as well as a discussion of Napier's Bones (see below) and Promptuary (another early calculating device).[4] His invention of logarithms was quickly taken up at Gresham College, and prominent English mathematician Henry Briggs visited Napier in 1615. Among the matters they discussed were a re-scaling of Napier's logarithms, in which the presence of the mathematical constant e (more accurately, e times a large power of 10 rounded to an integer) was a practical difficulty. Napier delegated to Briggs the computation of a revised table. The computational advance available via logarithms, the converse of powered numbers or exponential notation, was such that it made calculations by hand much quicker.[5] The way was opened to later scientific advances, in astronomy, dynamics, and other areas of physics.

Napier made further contributions. He improved Simon Stevin's decimal notation. Lattice multiplication, used by Fibonacci, was made more convenient by his introduction of Napier's bones, a multiplication tool using a set of numbered rods.

Napier may have worked largely in isolation, but he had contact with Tycho Brahe who corresponded with his friend John Craig. Craig certainly announced the discovery of logarithms to Brahe in the 1590s (the name itself came later); there is a story from Anthony à Wood, perhaps not well substantiated, that Napier had a hint from Craig that Longomontanus, a follower of Brahe, was working in a similar direction. It has been shown that Craig had notes on a method of Paul Wittich that used trigonometric identities to reduce a multiplication formula for the sine function to additions.[6] 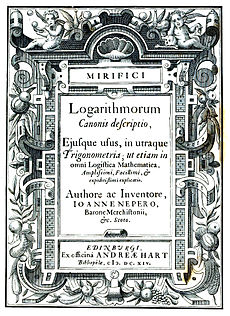 Napier had an interest in the Book of Revelation, from his student days at St Salvator's College, St Andrews. Under the influence of the sermons of Christopher Goodman, he developed a strongly anti-papal reading.[5] He further used the Book of Revelation for chronography, to predict the Apocalypse, in A Plaine Discovery of the Whole Revelation of St. John (1593), which he regarded as his most important work; he also applied the Sibylline Oracles, to calculate the date of the end of the world.[7] Napier believed that would occur in 1688 or 1700. He dated the seventh trumpet to 1541.[8]

In his dedication of the Plaine Discovery to James VI, dated 29 Jan 1594,[9] Napier urged the king to see "that justice be done against the enemies of God's church," and counselled the King "to reform the universal enormities of his country, and first to begin at his own house, family, and court." The volume includes nine pages of Napier's English verse. It met with success at home and abroad. In 1600 Michiel Panneel produced a Dutch translation, and this reached a second edition in 1607. In 1602 the work appeared at La Rochelle in a French version, by Georges Thomson, revised by Napier, and that also went through several editions (1603, 1605, and 1607). A new edition of the English original was called for in 1611, when it was revised and corrected by the author, and enlarged by the addition of With a resolution of certain doubts, moved by some well affected brethren.;[10] this appeared simultaneously at Edinburgh and London. The author stated that he still intended to publish a Latin edition, but it never appeared. A German translation, by Leo de Dromna, of the first part of Napier's work appeared at Gera in 1611, and of the whole by Wolfgang Meyer at Frankfurt-am-Main, in 1615.[5] Among Napier's followers was Matthew Cotterius (Matthieu Cottière).[11] 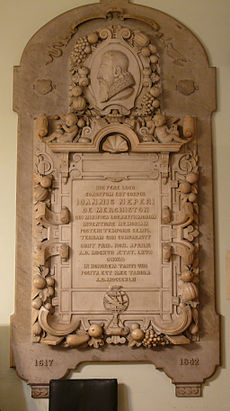 In addition to his mathematical and religious interests, Napier was often perceived as a magician, and is thought to have dabbled in alchemy and necromancy. It was said that he would travel about with a black spider in a small box, and that his black rooster was his familiar spirit.[12][13][unreliable source?]

A contract still exists for a treasure hunt, made between Napier and Robert Logan of Restalrig. Napier was to search Fast Castle for treasure allegedly hidden there, wherein it is stated that Napier should

"...do his utmost diligence to search and seek out, and by all craft and ingine to find out the same, or make it sure that no such thing has been there."[5]

Among Napier's early followers were the instrument makers Edmund Gunter and John Speidell.[14][15][16] The development of logarithms is given credit as the largest single factor in the general adoption of decimal arithmetic.[17] The Trissotetras (1645) of Thomas Urquhart builds on Napier's work, in trigonometry.[18]

An alternative unit to the decibel used in electrical engineering, the neper, is named after Napier, as is Edinburgh Napier University in Edinburgh, Scotland.

The crater Neper on the Moon is named after him.[19]

In 1572, Napier married 16-year-old Elizabeth, daughter of James Stirling, the 4th Laird of Keir and of Cadder. They had two children. Elizabeth died in 1579, and Napier then married Agnes Chisholm, with whom he had ten more children. His father-in-law James Chisholm of Cromlix was later mixed up in the Spanish blanks plot, over which Napier with others petitioned the king.[20]