John Nepomucene Neumann, C.Ss.R. (Czech: Jan Nepomucký Neumann, German: Johann Nepomuk Neumann; March 28, 1811 – January 5, 1860), was a native of Bohemia who became fluent in six languages before immigrating to the United States, where he became a Catholic priest of the Redemptorist order and the fourth Bishop of Philadelphia (1852–60). He is the first United States bishop (and to date the only male citizen) to be canonized. While Bishop of Philadelphia, Neumann founded the first Catholic diocesan school system in the United States.

John was born on March 28, 1811, in Prachatitz, in the Kingdom of Bohemia[1] (then part of the Austrian Empire, now in the Czech Republic). He attended school in České Budějovice before entering the seminary there in 1831. Two years later he transferred to the Charles University in Prague, where he studied theology, though he was also interested in astronomy and botany. By the time he was twenty-four, he had learned six languages.[2] His goal was to be ordained to the priesthood, and he applied for this after completing his studies in 1835. His bishop, however, had decided that there would be no more ordinations at that time, as Bohemia had numerous priests and difficulty finding positions for them all. In 1836 Neumann traveled to the United States in the hope of being ordained.

Neumann arrived in New York with one suit of clothes and one dollar in his pocket.[2] Three weeks later, Bishop John Dubois, Society of Saint-Sulpice, ordained him in June 1836 at what is now the Old St. Patrick's Cathedral in New York City.

The Diocese of New York at that time encompassed all of the State of New York and half of New Jersey.[1] After his ordination, Bishop Dubois assigned Neumann to work with recent German immigrants in the Niagara Falls area, where there were no established parish churches. His first assignment was the Church of Sts. Peter and Paul in Williamsville, New York. His parish in western New York stretched from Lake Ontario to Pennsylvania.

People laughed at the clumsy way Father Neumann rode a horse; because he was short, his feet did not reach the stirrups.[2] He traveled the countryside—visited the sick, taught catechism, and trained teachers to take over when he left. Neumann took up full-time residence in North Bush (now part of Tonawanda) as the first pastor of St. John the Baptist Church (1836–40). He made this the base for his missionary work.[1]

Because of the work and the isolation of his parish, Father John longed for community. In 1840, with Dubois' permission, Neumann applied to join the Redemptorist Fathers, was accepted, and entered their novitiate at St. Philomena's Church in Pittsburgh. He was their first candidate in the New World and took his religious vows as a member of the congregation in Baltimore, in January 1842. He served as the pastor of St. Augustine Church in Elkridge, Maryland, from 1849 to 1851.[3] After six years of difficult but fruitful work in Maryland, Neumann became the Provincial Superior for the United States. The priest was naturalized as a United States citizen in Baltimore on February 10, 1848. He also served as parish priest at St. Alphonsus Church in Baltimore.[4]

On February 5, 1852 the Holy See appointed Neumann Bishop of Philadelphia.[5] His predecessor in that office, Francis Kenrick (who had become Archbishop of Baltimore), presided over the consecration on March 28, and Bishop Bernard O'Reilly assisted. Philadelphia had a large and expanding Catholic immigrant population; Germans who fled the Napoleonic and other Continental wars had been followed by Irish fleeing the Great Famine caused by the potato blight and wars. Soon Italians and other southern and eastern European Catholics would arrive. Some settled in the rural parts of the diocese, similar to the rural areas of New York state where Neumann had begun his ministry.

But many stayed in the city, one of the largest in the new country, as it was an industrializing mercantile hub, with many jobs for people with little command of the English language. The waves of immigration resulted in tensions in the city with native-born residents, who had to compete for work in difficult economic times. Anti-Catholic riots took place in the 1830s and 1844, in the Philadelphia Nativist Riots, occurring as Irish Catholics began to arrive in great number in the city. Soon more riots occurred, particularly since the city was a stronghold of the Know-Nothing political party, known for its anti-immigrant and anti-Catholic prejudices.

During Neumann's administration, new parish churches were completed at the rate of nearly one per month. As many immigrants settled in close communities from their hometowns and with speakers of the same language, churches became associated with immigrants from particular regions, and were known as national parishes. Their parishioners often did not speak English or know how to obtain needed social services.[5]

Bishop Neumann became the first bishop in the country to organize a diocesan school system, as the Catholic parents wanted their children taught in the Catholic tradition. They feared Protestant influence and discrimination in the public schools.[6] Under his administration, the number of parochial schools in his diocese increased from one to 200. Neumann's fluency in several languages endeared him to the many new immigrant communities in Philadelphia. As well as ministering to newcomers in his native German, Neumann also spoke Italian fluently. A growing congregation of Italian-speakers received pastoral care in his private chapel, and Neumann eventually established in Philadelphia the first Italian national parishes in the country.

Bishop Neumann actively invited religious institutes to establish new houses within the diocese to provide necessary social services.[6] In 1855, Neumann supported the foundation of a congregation of religious sisters in the city, the Sisters of St. Francis of Philadelphia.[5] He brought the School Sisters of Notre Dame from Germany to assist in religious instruction and staff an orphanage. He also intervened to save the Oblate Sisters of Providence from dissolution; this congregation of African-American women was founded by Haitian refugees in Baltimore.

The large diocese was not wealthy, and Neumann became known for his personal frugality. He kept and wore only one pair of boots throughout his residence in the United States. When given a new set of vestments as a gift, he would often use them to outfit the newest ordained priest in the diocese. Discouraged by constant conflict with religiously and racially prejudiced people, as well as the anti-Catholic riots and arson of religious buildings, Neumann wrote to Rome asking to be replaced as bishop, but Pope Pius IX insisted that he continue. In 1854, Neumann traveled to Rome and was present at St. Peter's Basilica on December 8, along with 53 cardinals, 139 other bishops, and thousands of priests and laity, when Pope Pius IX solemnly defined, ex cathedra, the dogma of the Immaculate Conception of the Blessed Virgin Mary.

While doing errands on January 5, 1860, Neumann collapsed and was taken by Indians back to the city where he later died. He was 48 years old. Bishop James Frederick Wood, a Philadelphia native who converted to Catholicism in Cincinnati in 1836 and been appointed Neumann's coadjutor with right of succession in 1857, succeeded Neumann as Bishop of Philadelphia. 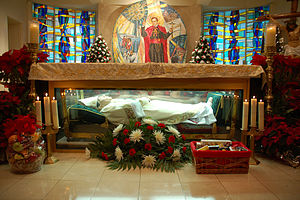 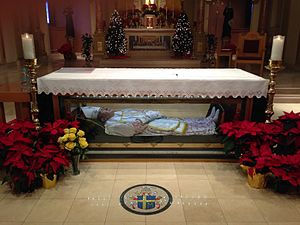 Holiday photograph at the altar for veneration of the remains of St. John Neumann.

Neumann was declared venerable by Pope Benedict XV in 1921. He was beatified by Pope Paul VI during the Second Vatican Council on October 13, 1963,[6] and was canonized by that same pope on June 19, 1977. His feast days are January 5, the date of his death, on the Roman calendar for the Church in the United States of America, and March 5 in the Czech Republic.

After his canonization, the National Shrine of Saint John Neumann was constructed at the Parish of St. Peter the Apostle in Philadelphia. The remains of St. John Neumann rest under the altar of the shrine within a glass-walled reliquary.

In 1980, Our Lady of the Angels College, founded by the congregation of Franciscan Sisters he had founded and located within the archdiocese, was renamed Neumann College. It was granted university status by the Commonwealth of Pennsylvania in 2009.[7]

In 2011, the Redemptorist Fathers celebrated the 200th anniversary of the birth of St. John Neumann. The Closing Mass for the Neumann Year was held on June 23, 2012, in Philadelphia.[8]