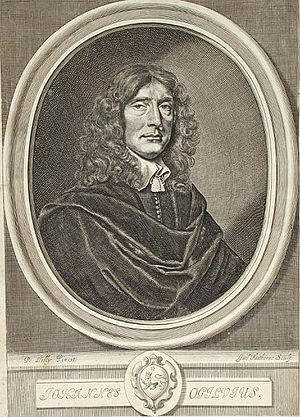 Portrait of John Ogilby from a 1660 edition of Homer's Iliad

Ogilby was born in or near Killemeare (Kirriemuir), Scotland in November 1600. When his father was made a prisoner within the jurisdiction of the King's Bench, presumably for bankruptcy or debt, young John supported the family and used some of the money he earned to buy two lottery tickets, which won him a minor prize. This he used to apprentice himself to a dancing master and to obtain his father's release. By further good management of his finances, he was able to buy himself an early completion of his apprenticeship and set up a dancing school of his own. However, a fall while dancing in a masque lamed him for life and ended this career.

Using contacts made among his high-born clients, Ogilby was eventually taken to Ireland by Thomas Wentworth, 1st Earl of Strafford, on his appointment as lord deputy there, and became tutor to his children. Ogilby then went on to establish Ireland's first theatre, the Werburgh Street Theatre, as a consequence of which he was made deputy-Master of the Revels in 1637. For the four years that the theatre was open it was a great success but it had to be closed as a result of the Irish Rebellion of 1641.

Having narrowly missed being blown up in the castle he was defending, and after being shipwrecked on his homeward journey, Ogilby arrived back in England penniless and without a patron during the closing years of the Civil War. Finding his way on foot to Cambridge, he learned Latin from kindly scholars who had been impressed by his industry. He then ventured to translate Virgil into English verse (1649–1650), which brought him a considerable sum of money. The success of this attempt encouraged Ogilby to learn Greek from David Whitford, who was usher in the school kept by James Shirley the dramatist.

After his return to London in 1650, he married the widow Christian Hunsdon, who had three children by her earlier marriage. In the following year he published the first edition of his politicised The fables of Aesop paraphras'd in verse, and adorn'd with sculpture and illustrated with annotations, illustrated by Francis Cleyn. The next few years were spent in translating and the opening of a publishing business in London. The Restoration of Charles II brought favour back to Ogilby with a commission to help in the arrangements for the coronation in 1660 with the composing of speeches and songs. In that year too he brought out his translation of Homer's Iliad, dedicated to his royal patron. A year later he was again made Master of the Revels in Ireland and he set about the building of a new theatre in Smock Alley, Dublin. The libretto of the musical play Pompey by Katherine Philips, performed at Smock Alley in 1663, credits him as the composer of the tunes.[1]

By 1665 Ogilby had returned to London and published a second, revised edition of The Fables of Aesop, this time illustrated by Wenceslaus Hollar's renowned prints. He had to republish the book in 1668[2] since his property was destroyed in the Great Fire of 1666. Rebuilding in Whitefriars, he set up a printing press there from which he issued many magnificent books, the most important of which were a series of atlases, with engravings and maps by Hollar and others.

In 1674 Ogilby had been appointed "His Majesty's Cosmographer and Geographic Printer". The Britannia atlas of 1675 set the standard for the road maps that followed.[citation needed] At that period some of the minor roads used the local mile rather than the standard mile of 1760 standard yards which Ogilby adopted in his atlas. One hundred strip road maps are shown, accompanied by a double-sided page of text giving additional advice for the map's use. Another innovation was Ogilby's scale of one inch to the mile (1/63360). These are marked and numbered on each map, the miles further being divided into furlongs. In his 2008 television series Terry Jones claimed that one of the map's purposes was to facilitate a Catholic takeover of the kingdom, an interpretation that one historian agreed was 'significant and highly plausible'.[3]

After the map's publication, Ogilby died in 1676 and was buried at St. Brides, one of Sir Christopher Wren's new London churches.

In the years that followed, Ogilby's reputation as a translator was to suffer from the attacks made on him by John Dryden in his satirical MacFlecknoe, and by Alexander Pope in The Dunciad. Whatever the justice of these, it should be borne in mind that Dryden had himself translated the work of Virgil, as Pope had of Homer, so it was in their interest to encourage a preference for their own products. Following their lead, the Scottish philosopher David Hume used Ogilby's work to illustrate the idea that common sense frequently appeals to a "standard of taste" in aesthetic matters: 'Whoever would assert an equality of genius and elegance between Ogilby and Milton, or Bunyan and Addison, would be thought to defend no less an extravagance, than if he had maintained a mole-hill to be as high as Teneriffe, or a pond as extensive as the ocean.' (Hume, "Of the Standard of Taste", originally published in his Four Dissertations (1757).)

Such judgments stuck and it is only recently that Ogilby's work has again been given scholarly attention, particularly his versions of Aesop's Fables.[4] These, according to the short life of him published by Theophilus Cibber,[5] were 'generally confessed to have exceeded whatever hath been done before in that kind'. They renewed interest in the fable as a literary medium and led the way in suggesting their adaptation to the troubled politics of the time. Both Dryden and Pope were as indebted to him in this as Dryden was for certain lines in his own translation of the Aeneid.[6] 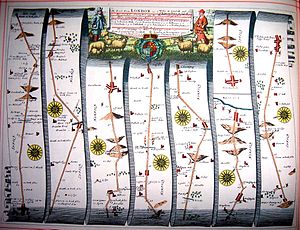