John was the eldest son of Walter Ogilvie, a respected Calvinist who owned the etatate of Drumnakeith in Banffshire. At the age of twelve he was sent to the Continent to be educated. He attended a number of Catholic educational establishments, under the Benedictines at Regensburg in Germany and with the Jesuits at Olmutz and Brunn in Bohemia. In the midst of the religious controversies and turmoil that engulfed the Europe of that era, he decided to become a Catholic. In 1596, aged seventeen, he was received into the Catholic Church at Louvain, Belgium. He joined the Society of Jesus in 1599 and was ordained a priest at Paris in 1610. After ordination he served in Rouen in Normandy where he made repeated entreaties to be sent to Scotland to minister to the few remaining Catholics in the Glasgow area (after 1560 it had become illegal to preach, proselytise for, or otherwise endorse Catholicism).

It was his hope that some Catholic nobles there would aid him, given his lineage. Finding none, he went to London, then back to Paris, and finally returned to Scotland in November 1613 disguised as a horse trader named John Watson. Thereafter he began to preach in secret, celebrating Mass clandestinely in private homes. 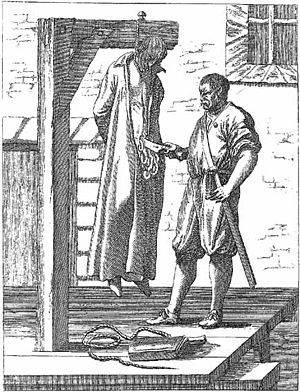 This ministry was to last less than a year. In October 1614, Ogilvie was discovered and arrested in Glasgow under the orders of Archbishop Spottiswood, and was imprisoned. He was initially treated well, but after continually refusing to confess, was tortured by sleep deprivation until he gave the names of some of his accomplices. He aggravated his position by refusing to pledge allegiance to King James, and it was for this crime that he was tried. During the trial he accused the king of 'playing the runagate from God' and stated he would acknowledge him no more than an 'old hat'. Found guilty, he was hanged and drawn at Glasgow Cross on 10 March 1615, aged thirty-six.

Ogilvie's last words were 'If there be here any hidden Catholics, let them pray for me but the prayers of heretics I will not have.' After he was pushed from the stairs, he threw his concealed rosary out into the crowd. According to legend, one of his enemies caught it and subsequently became a devout, lifelong Catholic. After his execution Ogilvie's followers were rounded up and put in jail. They suffered heavy fines, but none received the death penalty.

As a martyr of the Reformation and the Counter-Reformation he was beatified in 1929 and canonised in 1976, becoming the only post-Reformation Scottish saint. His feast day is celebrated on 10 March in the Catholic Church.