John Peter Petrucci (born July 12, 1967) is an American guitarist, composer and producer. He is best known as a founding member of the progressive metal band Dream Theater. With his former bandmate Mike Portnoy, he has produced all Dream Theater albums from 1999's Metropolis Pt. 2: Scenes from a Memory to 2009's Black Clouds & Silver Linings, and has been the sole producer of the band's albums released since Portnoy's departure in 2010. Petrucci was named as the third player on the G3 tour six times, more than any other invited guitarist. Joel McIver's 2009 book The 100 Greatest Metal Guitarists ranks Petrucci second, after Dave Mustaine.[1] He was also named as one of the "Top 10 Greatest Guitar Shredders of All Time" by GuitarOne magazine.[2] In 2012, Petrucci was ranked the 17th greatest guitarist of all time by a Guitar World magazine reader's poll.[3]

John Petrucci was born on July 12, 1967 in Kings Park, New York to an Italian American family. He picked up the guitar at the age of eight because his older sister was allowed to go to bed later in order to practice the piano. However, he decided to quit the guitar when his attempts to stay up late were unsuccessful. He picked up the guitar again at the age of 12. Petrucci has said he committed to practicing guitar 6 hours a day when he discovered it was his passion. His early influences were bands like Led Zeppelin, Black Sabbath, AC/DC, and later developed an interest in progressive rock and heavy metal, exemplified by Rush, Yes, Iron Maiden, Dixie Dregs and Metallica.[4][5]

Eventually, his childhood friend and future Dream Theater keyboardist Kevin Moore invited Petrucci to join his cover band. Petrucci attended Berklee College of Music in Boston with childhood friend John Myung (bass), where they met future bandmate Mike Portnoy (drums). While in Berklee they often covered two of their biggest influences, Iron Maiden and Rush. These three, in addition to Kevin Moore, formed the band Majesty. Because there was already another band with the same name, the group later became Dream Theater.

While Petrucci is most commonly associated with Dream Theater, he is also in the project band Liquid Tension Experiment, and has appeared as a guest on records by other artists, such as the Age of Impact album by the Explorer's Club.

In 2001, Joe Satriani and Steve Vai invited Petrucci to tour with them on the popular G3 guitar tour, which exposed him to a massive number of new fans and inspired a solo album. The album, Suspended Animation, was released on March 1, 2005, and was available for order from his web site. Petrucci also appeared on the 2005 and 2006 G3 tours, and in 2007, went on G3 tour again, this time with Paul Gilbert and Joe Satriani. In a recent video with Larry DiMarzio, Petrucci announced that he is working on a follow up to his 2004 album, Suspended Animation and a new Dream Theater album.[6]

In 2012, Petrucci was invited once again to join Joe Satriani in his G3 tour with Steve Morse. His Dream Theater drummer Mike Mangini, and his former G3 bass player Dave LaRue accompanied him on the tour.

Dream Theater bandmate Jordan Rudess revealed in an interview that Petrucci is a practicing Catholic.[7] He currently lives in St. James, New York with his wife Rena Sands, a guitarist in the all-female heavy metal band Meanstreak, and they have three children—twins Samantha and Renato, and Kiara. He is the uncle of Jake Bowen, a guitarist in the progressive metal band Periphery. He is also an avid fan of bodybuilding and dedicates much of his off time to weight training. He is a voting member of NARAS.[8] 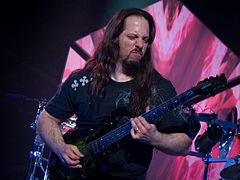 John Petrucci during a concert in 2012.

Petrucci is respected for his variety of guitar styles and skills. One of the most notable of these is his high speed alternate picking which, as he himself claims, requires a "strong sense of synchronization between the two [playing] hands." John is notable for frequent use of the seven-string electric guitar, which he says he uses as a writing tool, taking advantage of the extended range for heavier riffing and to play extended range runs as part of a solo. Moreover, Petrucci often combines his metal shredding technique with a slower, emotive soloing style. His influences as a guitarist include Steve Morse, Al Di Meola, Steve Howe, Allan Holdsworth, Stevie Ray Vaughan, Randy Rhoads, Joe Satriani, Steve Vai, Alex Lifeson, Yngwie Malmsteen and David Gilmour.[5][9]

Petrucci is the only band member in Dream Theater to have contributed lyrics to every album, and his lyrics have been used for at least three songs on each. These include, among others, Metropolis, Pt. 1: The Miracle and the Sleeper, The Spirit Carries On, The Great Debate, In the Presence of Enemies, and Through Her Eyes. Petrucci uses real-life experiences for lyrical inspiration, as can be heard in the songs The Count of Tuscany, A Nightmare to Remember and Endless Sacrifice.

Petrucci has acted as a backing vocalist live since the Awake Tour. He is a baritone, producing a sound darker than that of James Labrie's tenor voice. He has also written vocal melodies for Dream Theater. Petrucci's role as a vocalist expanded following the departure of Mike Portnoy, who had been Dream Theater's primary backing vocalist and occasionally even shared lead vocals with LaBrie. In live performances, Petrucci now replicates some vocal parts originally sung by Portnoy, with others being recorded samples.