With his partner, Brenda Chamberlain, Petts set up the Caseg Press in Snowdonia in 1937, and collaborated with poet Alun Lewis before the latter died in the Second World War. In later life Petts lived and worked in Abergavenny. 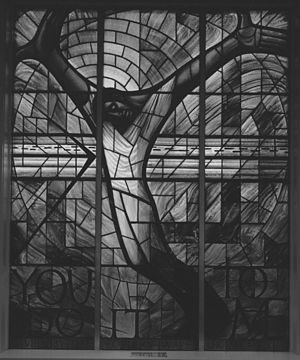 Stained glass window designed by Petts at the 16th Street Baptist Church in Birmingham, Alabama, erected in memoriam following the 1963 bombing of the church, using funds donated by the people of Wales

In 1963, Petts designed and created a stained glass window featuring a Black Jesus for the 16th Street Baptist Church in Birmingham, Alabama, following a racially motivated bombing that killed four African-American girls aged 11–14. Betts, a conscientious objector during World War II, was said to be horrified "as a father and as a craftsman" upon hearing the news.[2] Working with the Western Mail to raise funds, Petts arranged donations from many thousands of Welsh locals to pay for the window. The window was installed and dedicated in 1965.[3] In 1970, the designs for the window were donated to the National Library of Wales.[4] In 2013, to commemorate the fiftieth anniversary of the bombing, Betts's original designs were displayed at the National Library of Wales in Aberystwyth until December 14, 2013.[5]

John Petts and the Caseg Press by Alison Smith