John William Polidori (7 September 1795 – 24 August 1821) was an English writer and physician. He is known for his associations with the Romantic movement and credited by some as the creator of the vampire genre of fantasy fiction. His most successful work was the short story "The Vampyre" (1819), the first published modern vampire story. Although originally and erroneously accredited to Lord Byron, both Byron and Polidori affirmed that the story is Polidori's.[1]

John William Polidori was born on 7 September 1795 in London, the oldest son of Gaetano Polidori, an Italian political émigré scholar, and Anna Maria Pierce, an English governess. He had three brothers and four sisters.[2]

Polidori was one of the earliest pupils at recently established Ampleforth College from 1804, and in 1810, went to the University of Edinburgh, where he wrote a thesis on sleepwalking and received his degree as a doctor of medicine on 1 August 1815, at age 19.[2]

In 1816, Dr. Polidori entered Lord Byron's service as his personal physician and accompanied him on a trip through Europe. Publisher John Murray offered Polidori 500 English pounds to keep a diary of their travels, which Polidori's nephew William Michael Rossetti later edited. At the Villa Diodati, a house Byron rented by Lake Geneva in Switzerland, the pair met with Mary Wollstonecraft Godwin, her husband-to-be, Percy Bysshe Shelley, and their companion (Mary's stepsister) Claire Clairmont.

One night in June, after the company had read aloud from Fantasmagoriana, a French collection of German horror tales, Byron suggested they each write a ghost story. Percy Bysshe Shelley wrote "A Fragment of a Ghost Story" and wrote down five ghost stories recounted by Matthew Gregory "Monk" Lewis, published posthumously as the Journal at Geneva (including ghost stories) and on return to England, 1816, the journal entries beginning on 18 August 1816. Mary Shelley worked on a tale that would later evolve into Frankenstein. Byron wrote (and quickly abandoned) a fragment of a story, "Fragment of a Novel", about the main character Augustus Darvell, which Polidori used later as the basis for his own tale, "The Vampyre", the first published modern vampire story in English.[3][4]

Dismissed by Byron, Polidori traveled in Italy and then returned to England. His story, "The Vampyre", which featured the main character Lord Ruthven, was published in the April 1819 issue of New Monthly Magazine without his permission. Whilst in London he lived on Great Pulteney Street (in Soho). Much to both his and Byron's chagrin, "The Vampyre" was released as a new work by Byron. Byron even released his own "Fragment of a Novel" in an attempt to clear up the mess, but, for better or worse, "The Vampyre" continued to be attributed to him.[2]

Polidori's long, Byron-influenced theological poem The Fall of the Angels was published anonymously in 1821.[2]

Polidori died in London on 24 August 1821, weighed down by depression and gambling debts. Despite strong evidence that he committed suicide by means of prussic acid (cyanide), the coroner gave a verdict of death by natural causes.[3][5] 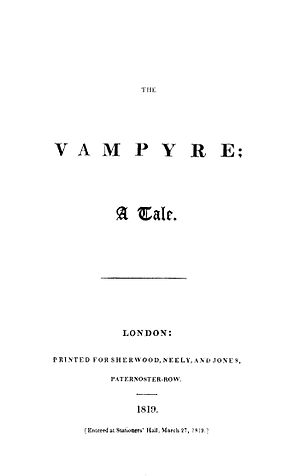 His sister Charlotte transcribed Polidori's diaries, but censored "peccant passages" and destroyed the original. Based only on the transcription, The Diary of John Polidori was edited by William Michael Rossetti and first published in 1911 by Elkin Mathews (London). Reprints of this book, The diary of Dr. John William Polidori, 1816, relating to Byron, Shelley, etc., was published by Folcroft Library Editions (Folcroft, PA) in 1975, and by Norwood Editions (Norwood, PA) in 1978. A 2009 edition has recently been printed by Cornell University.[citation needed]

A memorial plaque on Polidori's home at 38 Great Pulteney Street was unveiled on 15 July 1998 by the Italian Ambassador, Paolo Galli.[7]

Appearances in other media

Multiple films have depicted John Polidori, and the genesis of the Frankenstein and "Vampyre" stories in 1816.

Additionally, Polidori's name was used for a character in a television movie adaptation of Mary Shelley's novel: Frankenstein: The True Story (1973), directed by Jack Smight.