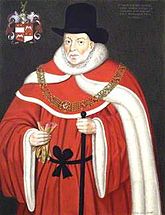 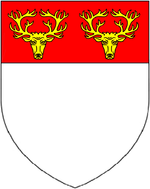 Arms of Popham: Argent, on a chief gules two stag's heads cabossed or; right: detail from monument to Sir John Popham in Wellington Church, showing a crescent sable for difference with crest: A stag's head and neck erased proper 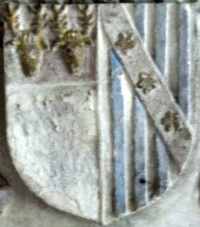 Escutcheon in the Pole Chapel of Colyton Church, Devon, showing arms of Popham impaling Stradling (Paly of six argent and azure, on a bend gules three mullets or), representing the marriage of Sir John Popham's parents. Detail from monument to Katherine Popham (died 1588), sister of Sir John Popham and wife of William Pole (1515-1587), MP, and mother of Sir William Pole (1561–1635) of Shute and of Colcombe Castle, Colyton, historian of Devon

He was born in 1531 at Huntworth in the parish of North Petherton, near Bridgwater, in Somerset, the second son of Alexander Popham (c.1504-1556) of Huntworth, twice MP for Bridgwater in 1545 and 1547, by his wife Jane Stradling, daughter of Sir Edward Stradling (d.1535) of St Donat's Castle, Glamorgan.[3] St Donat's Castle situated on the south coast of Glamorgan was a short sail across the Bristol Channel into the inland port of Bridgwater on the River Parret. The Popham family had held the manor of Huntworth since the 13th century when Sir Hugh de Popham (tempore Edward I) (a younger son of the Popham family of the manor of Popham, Hampshire) married Joan de Kentisbury, daughter and heiress of Sir Stephen de Kentisbury of Huntworth.[4] His nephew was Sir William Pole (1561-1635), the historian of Devon.

He was educated at Balliol College, Oxford where he read classics and divinity, and entered the Middle Temple as a law student.

He served as an MP for Lyme Regis in 1558 and for Bristol in 1571 and 1572 and was a Justice of the Peace in Somerset. He served in the honourable position of Recorder of Bridgwater and of Bristol.[5] He was promoted to serjeant-at-law in 1578 and appointed Solicitor-General in 1579. In 1581 he was elected Speaker of the House of Commons and later that year was appointed Attorney-General. In 1592 following the death of Sir Christopher Wray, he was appointed Chief Justice of the Queen's Bench, which position he retained until his death.

Popham is credited with maintaining the stability of the British State, and for being one of the "real colonisers" of the British Empire; hosting two Wabanaki tribesmen kidnapped on the Maine coast in 1605, subsequently funding and orchestrating the aborted Popham Colony at the mouth of the Kennebec River, Maine (1607–1608).

Popham became a very wealthy man, and amongst the many estates he owned was Publow in Somerset,[6] Littlecote in Wiltshire, and Hemyock Castle in Devon. In Peter Blundell's will[7] of 1599 Popham was asked to establish a free grammar school in the town of Tiverton in Devon, which resulted in his founding of Blundell's School which opened in 1604 and still exists to this day.

In 1595 Popham presided over the trial of the Jesuit Robert Southwell and passed sentence of death by hanging, drawing and quartering. He also presided over the trials of Sir Walter Raleigh (1603) and the conspirators of the Gunpowder Plot, including Guy Fawkes (1606). He was also involved in the trial at Fotheringay of Mary, Queen of Scots (1587) which resulted in her execution.

While working as the messenger to the Queen, Popham was imprisoned by Robert Devereux, 2nd Earl of Essex with his henchman. Ever stoic, Popham replied that at his age, death would be “but cutting off a few years.” However, he was rescued and rowed to safety by Sir Ferdinando Gorges (1565–1647).

He was noted for his severity towards thieves and strict enforcement of the Penal Laws. 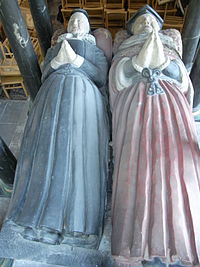 John Popham married Amy Adams[8] (alias Games), daughter and heiress of Hugh (alias Howel) Adams (alias Games) of Castleton, Glamorgan, a fortified manor house 800 metres north-east of the village of St Athan. Castleton was from the early 12th century the caput of the lordship of St Athan established by the Nerber family, and held from the overlords the Earls of Gloucester, comprising 4 knight's fees.[9] John de Nerber was the last in the line, and died in the early 16th century. In 1528, "by corrupt dealings",[10] Castleton was acquired by Howel Adams. In 1538 Leland (d.1552) recorded: "Castleton, a manor place on a hille ascending from the ripe.[11] And late it (be)longgid to one Hugh Adam, a man of mene lands whos doughter is now heir of it".[12] By his marriage Popham inherited Castleton and sold it to his maternal relative Sir Thomas Stradling of St Donat's Castle.[13] By his wife Popham had progeny one son and six daughters including:

His nephew was George Popham, founder of Popham Colony, of which John was one of the principal financial backers.

Montacute House, east front, comparable in size[14] and date to Wellington House built by Sir John Popham and destroyed in 1645

As his main residence he built Wellington House, a "large and stately mansion"[15] in the town of Wellington, Somerset, "only slightly smaller than Montacute"[16] also in Somerset (built in about 1598 by Sir Edward Phelips, Master of the Rolls and the prosecutor during the trial of the Gunpowder Plotters). It was destroyed during the Civil War (1642–1651), having been "obtained by strategem by one Bovet of Taunton who converted it into a garrison for the use of the Parliament army and defended it for a considerable time against Sir Richard Grenville who came to its rescue in which contest it was so battered that it was never afterward deemed worthy repairing".[17] In March 1645 the Royalist commander Grenville was ordered to march into Somersetshire and assist in the siege of Taunton. While inspecting the fortifications of "Wellington House" he was severely wounded, and obliged for a time to resign the command of his forces to Sir John Berkeley.[18] Wellington had probably been supplying Blake with necessaries for some time, and Colonel Bovet, a very ardent Parliamentarian, got possession of Popham’s house and made it a stronghold for his party. So against Wellington Grenville directed the Royalist force and levelled Popham’s house almost to the ground, himself being so severely injured that the leadership of his men had to be transferred to Sir John Barkley. The following document dated 19 October 1650[19] was addressed to Justices of Peace of Somerset:[20]

"Anne Martyn of Wellington, widdowe, being in the howse of the Honourable Alexander Popham with her family, att the seige thereof by the late Kinge's forces, sustayned greate losses of goodes and cattle, viz., several kine, one heifer, tenne young cattle, three calves, five colts, a mare and a horse, forty sheepe, five bedds with their furniture, bacon, butter, and cheese, wool, lynnen, corne of all sorts, pewter, brasse, and other moveable goodes, valued in all att the summe of ... hundred and threescore and fifteen poundes, besides the summe of twenty and two poundes in ready money; and that her eldest sonne was killed in the said howse by the said late Kynges forces. Signed Rich. Bouell, Alexander Popham, Edw. Popham, John Pyne."[21] 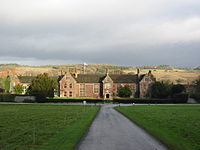 Littlecote House, south front added by Sir John Popham after 1589. His armorials sculpted in stone survive above the front door

Popham acquired the reversion of the estate of Littlecote in Berkshire (today in Wiltshire) from William Darrell (1539-1589), MP, and following the latter's death in 1589 duly became its owner. The historian John Aubrey (1626-1697) stated that Popham had acquired Littlecote as a bribe for having obtained a nolle prosequi in favour of the murderer William "Black" Darrell,[22] which account Rice (2005) deemed "not accurate" and "A story of passion, murder and confusion".[23] Popham expanded the house and added a south wing in red-brick, which structure survives today. His armorials survive above the south porch.[24] Following the destruction of Wellington House in the Civil War, Littlecote became the principal seat of his descendants, the last of whom in the male line was Francis Popham (d.1780), of Littlecote and Hunstrete, Somerset, who died without progeny and bequeathed his estates to his nephew Edward William Leyborne (born 1764), who in 1805 in accordance with the terms of the bequest assumed by royal licence the additional surname and arms of Popham. The Leyborne-Popham family sold Littlecote in 1929 and moved to their other seat at Hunstrete House, Pensford, Somerset.[25]

Popham died on 10 June 1607 at Wellington, Somerset. He was buried in the Church of St John the Baptist, Wellington where exists his large free-standing monument. 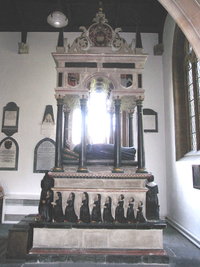 At the east end of the north aisle of St John the Baptist's Church in Wellington, survives the 18 foot high monument with effigies of Sir John Popham and his family. As described by Collinson (d.1793) in 1791 it was situated in the south aisle chapel, from which it has been moved to its present position, but retaining the same orientation. Collinson described the monument as follows:[26]

"In the chapel on the south side of the church is a magnificent tomb, surrounded with a pallisado of wood and iron, on the table of which lie the effigies of Sir John Popham, and that of his lady. He is dressed in his judges robes, chain, and small square black cap; and placed with his head towards the west. On the lower basement, at the head and feet, are four other smaller figures of two men and two women, kneeling face to face. On the north side of the same basement are five boys and eight girls, dressed in black, kneeling in a row. And on the south side are nine women kneeling in the fame manner. Over Sir John and his lady is a superb arched canopy, ornamented with the family arms, roses, paintings, and obelisks; the whole supported by eight round columns of black marble, five feet high, with Corinthian capitals green and gilt".

The two male and female couples kneeling opposite each other separated by a prie-dieu, shown at each end of the monument, are believed to represent his 34-year-old son Sir Francis Popham and the latter's wife (east-end) and his parents, represented as a middle-aged couple (west-end). The nine female kneeling figures on the south side, all facing westward, are believed to represent Sir John Popham's six daughters with three ladies maids, the latter three figures kneeling behind the daughters and wearing plain not lace ruffs. The kneeling figures on the north side are believed to represent the five sons (facing westwards) and eight daughters (facing eastwards) of Sir Francis Popham, the son of Sir John Popham.[27] Inscribed on a stone tablet on the west side of the entablature is the following text:

Sr John Popham Knighte and Lord Chief Justice of England and of the Honorable Privie Councell to Queene Elizabeth and after to King James, aged 76, died the 10th of June, 1607 and is here interred.[28]

A heraldic escutcheon is shown on the north side of the monument to Sir John Popham in Wellington Church of nine quarters as follows: