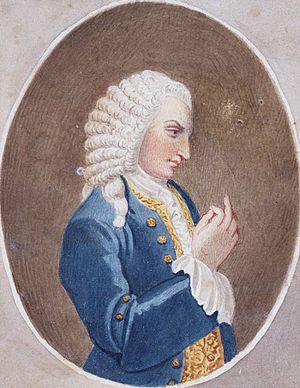 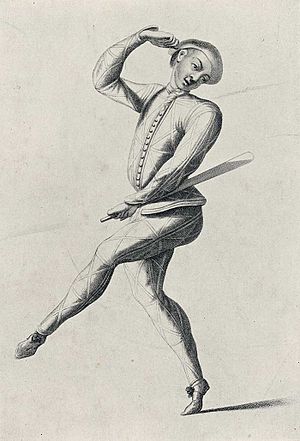 John Rich (1692–1761) was an important director and theatre manager in 18th-century London. He opened the New Theatre at Lincoln's Inn Fields (1714) and then the Theatre Royal, Covent Garden (1732) and began putting on ever more lavish productions. He introduced pantomime to the English stage and played a dancing and mute Harlequin himself from 1717 to 1760 under the stage name of "Lun."[1]

Rich's theatre specialized in what contemporaries called "spectacle." Today we might call them "special effects." His stagings would endeavour to present actual cannon shots, animals, and multiple illusions of battle. By 1728, Rich was synonymous with lavish (and successful) productions.

Lewis Theobald was working for Rich on writing pantomimes. When Alexander Pope wrote the first version of The Dunciad, and even more in the second and third editions, Rich appears as a prime symptom of the disease of the age and debasement of taste. In his Dunciad Variorum of 1732, he makes John Rich the angel of the goddess Dulness:

Immortal Rich! how calm he sits at ease
Mid snows of paper, and fierce hail of pease;
And proud his mistress' orders to perform,
Rides in the whirlwind, and directs the storm." (III l. 257-260)

"Here shouts all Drury, there all Lincoln's-Inn;
Contending Theatres our (Dulness's) empire raise,
Alike their labours, and alike their praise."

Yet, at the same time, 1728 was the year that Rich produced John Gay's Beggar's Opera, and the play ran so successfully that it was famously said the play "made Gay rich and Rich gay." John Gay was a long-time friend of Pope's and a frequent collaborator of his. In 1732, Rich opened the Theatre Royal Covent Garden, the first of three theatres on the site, now known as the Royal Opera House.

Rich received a 75% share in the Lincoln's Inn Fields theatre from his father, Christopher Rich, upon his death in 1714. By that point, Rich had already begun acting in plays and taking a hand in the theatrical management. His father had set the reputation and direction of the Lincoln's Inn Theatre during the War of the Theatres in the 1690s, and John Rich continued it. In particular, John Rich exaggerated the theatricality of the Restoration spectacular by creating a new form of hireling drama designed strictly to generate opulent stagecraft. After becoming majority owner of Lincoln's Inn Fields, his control grew as he sought to get the rest of the shares. It was the success of Beggar's Opera that allowed him, in the end, to open the new theatre at Covent Garden.

During his time as producer and director, Rich had multiple battles with his acting companies and rival managers, including Colley Cibber. In Cibber's Apology, he blames the degradation and skyrocketing costs of play productions on Rich. The general opinion of satirists was that Cibber was thoroughly as guilty as Rich, and the Cibber children went on to carry forth the habits of their father, just as John Rich carried forth and exaggerated the habits of his. Cibber's Drury Lane and Rich's Lincoln's Inn (and then Covent Garden) theatres were in competition throughout Rich's lifetime. Indeed, the two theatres twice put on the same play at the same time, with Romeo and Juliet and King Lear in 1756-7. Rich's company also staged a number of rarely seen Shakespearean plays, among them Cymbeline.