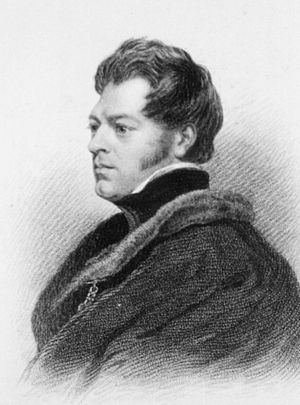 Richardson was born at Dumfries. He studied medicine at Edinburgh University, and became a surgeon in the navy in 1807. He traveled with John Franklin in search of the Northwest Passage on the Coppermine Expedition of 1819–1822. Richardson wrote the sections on geology, botany and ichthyology for the official account of the expedition.[1]

Franklin and Richardson returned to Canada in 1825 and went overland by fur trade routes to the mouth of the Mackenzie River. Franklin was to go as far west as possible and Richardson was to go east to the mouth of the Coppermine River. These were the only known points on the central coast and had been reached in 1793 and 1771 respectively. He had with him two specially-built boats which were more ocean-worthy than the voyageur canoes used by Franklin on his previous expedition. They gave their names to the Dolphin and Union Strait near the end of his route.

His journey was successful and he reached his furthest east the same day that Franklin reached his furthest west (16 August 1826). He abandoned his boats at Bloody Falls and trekked overland to Fort Franklin which he reached three weeks before Franklin. Together they had surveyed 1,878 miles of previously unmapped coast. The natural history discoveries of this expedition were so great that they had to be recorded in two separate works, the Flora Boreali-Americana (1833–40), written by William Jackson Hooker, and the Fauna Boreali-Americana (1829–37), written by Richardson, William John Swainson, John Edward Gray and William Kirby.[1]

At the British Association for the Advancement of Science meeting in 1842, Richardson described the diving apparatus and treatment of diver Roderick Cameron following an injury that occurred on 14 October 1841 during the salvage operations on the HMS Royal George.[2]

Richardson was knighted in 1846. He traveled with John Rae on an unsuccessful search for Franklin in 1848–49, describing it in An Arctic Searching Expedition (1851). He retired to the Lake District in 1855, and is buried at St Oswald's Church, Grasmere.[1]

He also wrote accounts dealing with the natural history, and especially the ichthyology, of several other Arctic voyages, and was the author of Icones Piscium (1843), Catalogue of Apodal Fish in the British Museum (1856), the second edition of Yarrell's History of British Fishes (1860), The Polar Regions (1861).[1] and Arctic Ordeal: The Journal of John Richardson Edited by C. Stuart Houston (1984). The National Marine Biological Library at the Marine Biological Association retains some original illustrations used by Richardson in preparation for the second edition of Yarrell's book.[3]

The standard author abbreviation Richardson is used to indicate this individual as the author when citing a botanical name.[4]