John Davan Sainsbury, Baron Sainsbury of Preston Candover, KG (born 2 November 1927) is the President of Sainsbury's, a British businessman, and a politician. He sits in the House of Lords as a member of the Conservative Party. 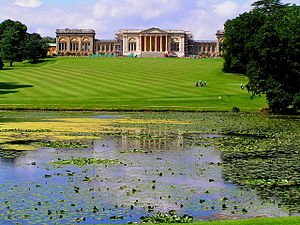 He is the son of Alan Sainsbury, Baron Sainsbury, and the nephew of Sir Robert Sainsbury. His younger brothers are Simon and Timothy, former Conservative Minister of Trade; David Sainsbury, former Labour Minister for Science, is a cousin. His great-grandparents, John James Sainsbury and Mary Ann Staples, established a grocer's at 173 Drury Lane in 1869 which became the British supermarket chain Sainsbury's. He is sometimes referred to as "Mr JD" Sainsbury (which is what he was known as when working for Sainsbury's).

When he bought his 18th-century mansion at Preston Candover in Hampshire, from the previous owner Peter Cadbury, he replanted trees that Peter Cadbury had cut down in order to make the house look bigger.

He was knighted in 1980 for services to the food retailing industry,[2][3] and was made a life peer on 31 January 1989 with the title Baron Sainsbury of Preston Candover, of Preston Candover in the County of Hampshire.[4][5] He became a Knight of the Garter in 1992.[6]

Lord Sainsbury joined Sainsbury's in 1950 (the year the first self-service store opened in Croydon), working in the grocery department. The next year he became a buyer.[7] He later became in charge of many other aspects of the business, including bacon buying in 1956. He became a director of the Company, then known as J. Sainsbury Ltd., in 1958, becoming Deputy Chairman in 1967 following his father Alan Sainsbury's retirement.

Lord Sainsbury took over from his uncle Sir Robert Sainsbury as chairman and chief executive in 1969. At the time, although Sainsbury's had always been the largest UK grocery retailer by market share since 1922, Tesco's profits were double those of Sainsbury's, and Marks & Spencer's were nine times those of Sainsbury's.

He led the company on to the London Stock Exchange on 12 July 1973, which was at the time the largest floatation ever. Dubbed "The sale of the century" by the press, his family at the time retained control with an 85% stake. Whilst his cousin, David Sainsbury, inherited his father Robert Sainsbury's entire 18% shareholding, Lord Sainsbury had to split his father Alan Sainsbury's 18% stake with his younger brothers The Hon. Simon Sainsbury and The Rt Hon. Sir Timothy Sainsbury, and so they held 6% each. It is believed that Robert Sainsbury gave David Sainsbury his entire shareholding (rather than split it between David and his three daughters) so that David would have more votes at the table, considering JD had a forceful, autocratic style of leadership, whereas David was always more cautious (and always seemed less interested in the family business than JD (David having only joined Sainsbury's personnel department as he did not get the grades to become a scientist)).

He led Sainsbury's into the USA through the purchase of Shaw's, a USA supermarket chain, and started both the Homebase and Savacentre ventures. Shaw's and Homebase have since been sold, whilst Savacentre has been re-branded under the core Sainsbury's brand.

Between 1973 and 1992, the company's market capitalisation increased from £117m to £8.115bn due to an increase in the share price from 9p to 464p (on 15 May 1992). Between 1969 and 1992 sales increased from £166m to £9.202bn and profit before tax increased from £4.3m to £628m. The Company also boasted the highest sales per square foot in the food retailing industry and the market share of the UK supermarket business increased from 2.5% to 10.4%. Sainsbury's also overtook both Tesco and Marks & Spencer (the latter shortly before his retirement on his 65th birthday on 2 November 1992) to become the UK's largest and most successful supermarket chain. [1] Following his retirement, his cousin and Labour supporter David Sainsbury (now Lord Sainsbury of Turville) became Chairman. Tesco overtook Sainsbury's to become the UK's largest supermarket chain in 1995, and David Sainsbury stepped down as Chairman in 1998 to pursue his long held ambition to have a career in politics.

Although Lord Sainsbury has retired, he is Life President of the retailer and continues to take an active interest in the business; these days he tours stores with present chief executive Mike Coupe as well as being the family member always attending J Sainsbury plc Annual General Meetings. He also serves as a Joint President of the Sainsbury's Veteran Association along with former Sainsbury's CEO Dino Adriano.

He is also the family member with a large shareholding that is most reluctant to sell down his stake. During the sell down of the family stake between 2005-2008 from 35% to 15%, it was Lord Sainsbury who was the last major family shareholder to reduce his stake, in his case from 4% to 3.89%, the 0.11% sold having belonged to a non-beneficial trust held by him.

J Sainsbury plc was informed on 5 December 2006 by Lord Sainsbury of Preston Candover, that he no longer holds a reportable interest in the Company following the transfer of shares within his family. As a result, his 3.89% shareholding in Sainsbury's is no longer reportable.

During the takeover bids for Sainsbury's during 2007, Lord Sainsbury used N M Rothschild & Sons as his financial advisor and was said to be the major family shareholder most resistant to selling his stake. Indeed, during the private equity takeover bid during the first half of 2007, he was said to be refusing to sell his stake of just under 3% at any price.

He is a former member of the Steering Committee of the Bilderberg Group.[10]

In 1985 he and his two brothers provided funds to construct a new wing of the National Gallery, London at a cost of around £50 million, which opened in 1991 as the Sainsbury Wing.[11]

With his wife, he also runs the Linbury Trust, which offers grants to various projects in the fields of the Arts, Education, Environment & Heritage, Medical, Social Welfare and Developing Countries. One of the most notable projects funded by the Linbury Trust was the 1990s redevelopment of the world-renowned Royal Opera House in London. The Linbury Studio Theatre in the building is named in recognition of the substantial contribution made by the trust.

Most notably contributing a considerable amount towards the redevelopment of the Royal Opera House. The Linbury Studio Theatre is named in recognition of the major contribution to the redevelopment of the Royal Opera House. In 1987, Lady Sainsbury founded the Linbury Biennial Prize for Stage Design, which identifies and encourages talented newcomers to the field of theatre design; the Prize continues to be funded solely by the Linbury Trust.

In 1993, he joined with Lord Rothschild to set up the Butrint Foundation to record and conserve the archaeological site of Butrint in Albania.

In September 2010 he donated £25m to the British Museum, which the BBC reported as the biggest gift to the arts in two decades.