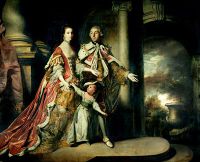 The 1st Earl of Mexborough, with his wife and son.

Savile was the eldest son of Charles Savile of Methley (1676–1741). He entered Parliament in 1747 as member for Hedon in East Yorkshire, and subsequently also represented New Shoreham. In 1749 he was appointed a Knight Companion of the Order of the Bath. In November 1753 he was raised to the peerage as Baron Pollington, of Longford in the County of Longford; however, this title was created in the Peerage of Ireland, meaning that it did not disqualify him from remaining an MP. In February 1766 he was created Viscount Pollington, of Ferns in the County of Wexford, and Earl of Mexborough, of Lifford in the County of Donegal, in the Irish peerage.

Mexborough was a friend and patron of the playwright and actor-manager Samuel Foote; it was while on a visit to Mexborough in 1766 that Foote lost a leg in a riding accident.