Eldon was born in Newcastle upon Tyne. His grandfather, William Scott of Sandgate, an area adjacent to Newcastle Quayside, was clerk to a fitter, a sort of water-carrier and broker of coals. His father, whose name also was William, began life as an apprentice to a fitter, in which service he obtained the freedom of Newcastle, becoming a member of the gild of Hostmen (coal-fitters);[1] later in life he became a principal in the business, and attained a respectable position as a merchant in Newcastle, accumulating property worth nearly £20,000.

Eldon was educated at Newcastle upon Tyne Royal Grammar School. He was not remarkable at school for application to his studies, though his wonderful memory enabled him to make good progress in them; he frequently played truant and was whipped for it, robbed orchards, and indulged in other questionable schoolboy pranks; nor did he always come out of his scrapes with honour and a character for truthfulness. When he had finished his education at the grammar school, his father thought of apprenticing him to his own business, to which an elder brother Henry had already devoted himself; and it was only through the interference of his elder brother William (afterwards Lord Stowell), who had already obtained a fellowship at University College, Oxford, that it was ultimately resolved that he should continue the prosecution of his studies. Accordingly, in 1766, John Scott entered University College with the view of taking holy orders and obtaining a college living. In the year following he obtained a fellowship, graduated with a Bachelor of Arts in 1770, and in 1771 won the prize for the English essay, the only university prize open in his time for general competition.[1]

His wife was the eldest daughter of Aubone Surtees, a Newcastle banker. The Surtees family objected to the match, and attempted to prevent it; but a strong attachment had sprung up between them. On 18 November 1772, Scott, with the aid of a ladder and an old friend, carried off the lady from her father's house in the Sandhill, across the border to Blackshields, in Scotland, where they were married. The father of the bridegroom objected not to his son's choice, but to the time he chose to marry; it was a blight on his sons prospects, depriving him of his fellowship and his chance of church preferment. But while the bride's family refused to hold intercourse with the pair, Mr Scott, like a prudent man and an affectionate father, set himself to make the best of a bad matter, and received them kindly, settling on his son £2000. John returned with his wife to Oxford, and continued to hold his fellowship for what is called the year of grace given after marriage, and added to his income by acting as a private tutor. After a time Mr Surtees was reconciled with his daughter, and made a liberal settlement of £3000.[1]

John Scott's year of grace closed without any college living falling vacant; and with his fellowship he gave up the church and turned to the study of law. He became a student at the Middle Temple in January 1773. In 1776, he was called to the bar, intending at first to establish himself as an advocate in his native town, a scheme which his early success led him to abandon, and he soon settled to the practice of his profession in London, and on the northern circuit. In the autumn of the year in which he was called to the bar his father died, leaving him a legacy of £1000 over and above the £2000 previously settled on him.[1]

In his second year at the bar his prospects began to brighten. His brother William, who by this time held the Camden professorship of ancient history, and enjoyed an extensive acquaintance with men of eminence in London, was in a position materially to advance his interests. Among his friends was the notorious Andrew Bowes of Gibside, to the patronage of whose house the rise of the Scott family was largely owing. Bowes having contested Newcastle and lost it, presented an election petition against the return of his opponent. Young Scott was retained as junior counsel in the case, and though he lost the petition he did not fail to improve the opportunity which it afforded for displaying his talents. This engagement, in the commencement of his second year at the bar, and the dropping in of occasional fees, must have raised his hopes; and he now abandoned the scheme of becoming a provincial barrister. A year or two of dull drudgery and few fees followed, and he began to be much depressed. But in 1780, we find his prospects suddenly improved, by his appearance in the case of Ackroyd v Smithson, which became a leading case settling a rule of law; and young Scott, having lost his point in the inferior court, insisted on arguing it, on appeal, against the opinion of his clients, and carried it before Lord Thurlow, whose favorable consideration he won by his able argument.[1]

The same year Bowes again retained him in an election petition; and in the year following Scott greatly increased his reputation by his appearance as leading counsel in the Clitheroe election petition. From this time his success was certain. In 1782, he obtained a silk gown, and was so far cured of his early modesty that he declined accepting the king's counselship if precedence over him were given to his junior, Thomas Erskine, though the latter was the son of a peer and a most accomplished orator. He was now on the high way to fortune. His health, which had hitherto been but indifferent, strengthened with the demands made upon it; his talents, his power of endurance, and his ambition all expanded together. He enjoyed a considerable practice in the northern part of his circuit, before parliamentary committees and at the chancery bar. By 1787, his practice at the equity bar had so far increased that he was obliged to give up the eastern half of his circuit (which embraced six counties) and attend it only at Lancaster.

In 1782, he entered Parliament for Lord Weymouth's close borough of Weobley, which Lord Thurlow obtained for him without solicitation. In Parliament he gave a general and independent support to Pitt. His first parliamentary speeches were directed against Fox's India Bill. They were unsuccessful. In one he aimed at being brilliant; and becoming merely labored and pedantic, he was covered with ridicule by Sheridan, from whom he received a lesson which he did not fail to turn to account. In 1788, he was appointed Solicitor General, and was knighted, and at the close of this year he attracted attention by his speeches in support of Pitt's resolutions on the state of the king (George III, who then labored under a mental malady) and the delegation of his authority. It is said that he drew the Regency Bill, which was introduced in 1789. In 1793, Sir John Scott was promoted to the office of Attorney-General, in which it fell to him to conduct the memorable prosecutions for high treason against British sympathizers with French republicanism, amongst others, against the celebrated Horne Tooke. These prosecutions, in most cases, were no doubt instigated by Sir John Scott, and were the most important proceedings in which he was ever professionally engaged. He has left on record, in his Anecdote Book, a defence of his conduct in regard to them. 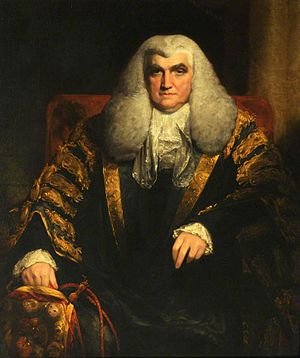 In 1799, the office of chief justice of the Court of Common Pleas falling vacant, Sir John Scott's claim to it was not overlooked; and after seventeen years' service in the Lower House, he entered the House of Lords as Baron Eldon. In February 1801, the ministry of Pitt was succeeded by that of Addington, and the chief justice now ascended the woolsack. The chancellorship was given to him professedly on account of his notorious anti-Catholic zeal. From the Treaty of Amiens (1802) till 1804, Lord Eldon appears to have interfered little in politics. In the latter year we find him conducting the negotiations which resulted in the dismissal of Addington and the recall of Pitt to office as prime minister. Lord Eldon was continued in office as chancellor under Pitt; but the new administration was of short duration, for on 23 January 1806 Pitt died, worn out with the anxieties of office, and his ministry was succeeded by a coalition, under Lord Grenville. The death of Fox, who became foreign secretary and leader of the House of Commons, soon, however, broke up the Grenville administration; and in the spring of 1807 Lord Eldon once more, under the Duke of Portland's administration, returned to the woolsack, which, from that time, he continued to occupy for about twenty years, swaying the cabinet.

During this time Lord Eldon was revered for his work in consolidating equity into a working body of legal principles. In Gee v Pritchard he wrote,[3]

"Nothing would inflict on me greater pain in quitting this place, than the recollection that I had done anything to justify the reproach that the equity of this court varies like the Chancellor's foot."

It was not till April 1827, when the premiership, vacant through the paralysis of Lord Liverpool, fell to Canning, the chief advocate of Roman Catholic emancipation, that Lord Eldon, in the seventy-sixth year of his age, finally resigned the chancellorship. When, after the two short administrations of Canning and Goderich, it fell to the Duke of Wellington to construct a cabinet, Lord Eldon expected to be included, if not as chancellor, at least in some important office, but he was overlooked, at which he was much chagrined. Notwithstanding his frequent protests that he did not covet power, but longed for retirement, we find him again, so late as 1835, within three years of his death, in hopes of office under Peel. He spoke in parliament for the last time in July 1834.

In 1821, Lord Eldon had been created Viscount Encombe and Earl of Eldon by George IV, whom he managed to conciliate, partly, no doubt, by espousing his cause against his wife, whose advocate he had formerly been, and partly through his reputation for zeal against the Roman Catholics.[1] In the same year his brother William, who from 1798 had filled the office of judge of the High Court of Admiralty, was raised to the peerage under the title of Lord Stowell. 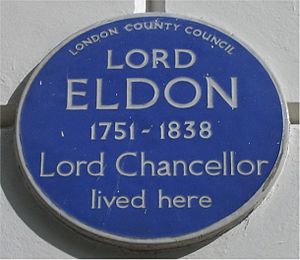 Lord Eldon's wife, whom he called Bessie, died before him, on 28 June 1831. Two of their sons reached maturity: John, who died in 1805, and William Henry John, who died unmarried in 1832. Lord Eldon himself survived almost all his immediate relations. His brother William died in 1836. He himself died in London on 13 January 1838, leaving behind him two daughters, Lady Frances Bankes and Lady Elizabeth Repton, and a grandson John (1805-1854), who succeeded him as second earl, the title subsequently passing to the latter's son John (born 1846). There is a blue plaque on his house in Bedford Square, London.

The Lord Eldon and his wife are buried in the churchyard in Kingston, Dorset.[1]

Although labelled a Tory by the opposition, Eldon called himself a Whig, sat with them during the 1830 parliamentary session and in 1825, following the defeat of the Tory Sir Francis Burdett's Emancipation Bill in the House of Lords by a majority of 48,[4] drank "the 48, the year 1688, and the glorious and immortal memory of William III".[5] [6] Eldon defended "a doctrine essentially similar to that which ministerial Whigs had held since the days of Burnet, Wake, Gibson and Potter".[7]