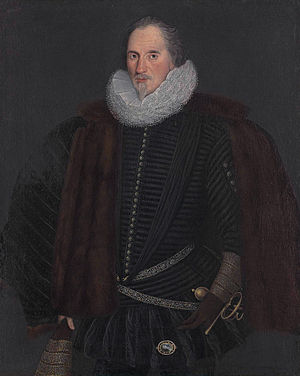 John Scudamore of Holme Lacy, Herefordshire (English School of circa 1590)

When James Croft became a Comptroller of the Household in 1570, Scudamore (though by then widowed) became a courtier and was appointed Gentleman Usher to Queen Elizabeth and Standard Bearer to The Honourable Band of Gentleman Pensioners.

His second wife, Mary Scudamore, daughter of Sir John Shelton of Norfolk and a member of the queen's privy chamber, was more important than he was because she had the queen's ear. Following Croft's death in 1590, his influence waned.

His heir was his son by his first marriage, Sir James Scudamore whose own son was ennobled as John Scudamore, 1st Viscount Scudamore.