From Infogalactic: the planetary knowledge core
Jump to: navigation, search
This article is about the British general. For the British military surgeon, see John Small (British Army medical officer).

Major-General John Small (13 March 1726 – 17 March 1796) was a British military officer who played a key role in raising and leading the 84th Regiment of Foot (Royal Highland Emigrants) during the American Revolution. He is one of the central figures in John Trumbull's famous painting, The Death of General Warren at the Battle of Bunker's Hill, June 17, 1775, in which he is shown deflecting a bayonet away from General Warren, who had been his friend before the hostilities had broken out. Small was Lieutenant Governor of Guernsey from 1793 until his death in 1796.

Born at Strathardle, Athole, he was the son of Patrick Small of Leanoch in Glenshee, Scotland and Magdalen Robertson, daughter of Alexander Robertson, 5th Laird of Straloch, Perthshire.[1] He was a brother of Alexander Small and James Small.[2] He was a first cousin and close friend of General John Robertson Reid.[1] His niece, Magdalen (Small) MacDonald, was the mother of John MacDonald of Garth and Mrs. William McGillivray. John Small and his relatives were members of the Smalls of Dirnanean, and are also related to the Small-Kiers of Kindrogan House.

At an early age he purchased a commission into the Scots Brigade and served with them in the Netherlands. He was promoted to 2nd Lieutenant in the Earl of Drumlanrig's Regiment when it was raised for service of the States General in 1747.[3] In 1756, Small obtained a commission in the British Army, becoming a Lieutenant in the Black Watch just before its departure for North America to fight in the Seven Years' War.[3]

Lieutenant Small fought at the Battle of Fort Oswego. Two years later, in 1758, he fought at the Battle of Ticonderoga under General James Abercrombie. Following the defeat, he accompanied General Amherst on his successful expedition to Lake Champlain and with him was present at the Surrender of Montreal in 1760. From Montreal he placed in charge of the French prisoners and took them to New York. General Amherst had great confidence in him, and frequently employed him "on particular services".[1] In 1762, Small was promoted to Captain and sailed with his regiment to take part in the Invasion of Martinique and the British expedition against Cuba.

Following the Treaty of Paris in 1763, Captain Small was placed on half-pay, but, according to General Stewart, he was almost immediately put on the full-pay list of the 21st North British Fusiliers and when in 1767 the Black Watch left for Europe, most of the men of that regiment who had volunteered to stay in North America joined the Fusiliers in order to serve under Small, who was "deservedly popular" with them. Small, however, cannot have served long with the 21st, for in the same year in which the Black Watch left America he was appointed Brigade Major to the forces in North America.[1]

It was probably during the interval between the Seven Years' War and the American Revolution that Small began to acquire his estate, Selmah Hall, in Nova Scotia, part of which he afterwards bequeathed to his first cousin, General John Robertson Reid. During this period, Small became interested in local politics and formed friendships with several influential American politicians.[1]

In 1765, Captain Small was placed in command of a company of the 21st Regiment of Foot, serving with them throughout the American Revolution until 1775, when he received an unofficial assignment from General Gage. Promoted to the rank of Major, Small was sent to Nova Scotia to raise at his own expense the Young Royal Highlanders Regiment. This regiment was afterwards amalgamated into the 84th Regiment of Foot (Royal Highland Emigrants). 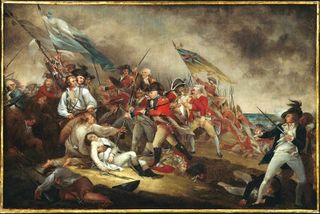 As Brigade Major, Small fought at the first major battle of the American Revolution, the Battle of Bunker Hill. In the course of that day his life was saved by the American General Israel Putnam, who, seeing Small standing alone at a time when all around him had fallen, struck up the barrels of his men's muskets to save his life.[1] He and Putnam had served together during the Seven Years' War. Along with three other members of the 84th Regiment, Small was wounded in the arm by cannon fire.

John Small was instrumental in assisting John Trumbull with his famous painting The Death of General Warren at the Battle of Bunker Hill.[4] Major Small is at the centre of the action holding the bayonet to prevent a fellow British soldier from killing his friend, American Patriot Joseph Warren (who in reality was shot through the head and instantly killed by a musket ball). The painting depicts the divisions the conflict created between people who were friends, yet were caught on opposite sides of the conflict.

Trumbull, in describing the painting for a catalogue of his works, explained why he chose to emphasize Major Small's role, saying that Small, whom he had apparently encountered in London, "was equally distinguished by acts of humanity and kindness to his enemies, as by bravery and fidelity to the cause he served."[5]

Small spent the most part of his time in New York on staff duty. Small was commander of the 84th Regiment of Foot (Royal Highland Emigrants), 2nd Battalion which eventually settled in the Douglas Township in Hants County, Nova Scotia. Small is reported to have built a manor house in Selma, Nova Scotia, called "Selmah Hall", after which the community is named.[6]

In 1793, Small became Lieutenant Governor of Guernsey and received his final promotion to Major General. He died there three years later, on 17 March 1796. He is buried within Saint Peter Port Church.[7] Small did not marry, and at his death his principal heir was his first cousin and good friend, General John Robertson Reid, to whom he left a valuable estate of four or five thousand acres in Nova Scotia.[1]