He first entered Parliament in 1970 and served as Secretary of State for Trade from 1978 to 1979, and then as Shadow Chancellor of the Exchequer under Neil Kinnock from 1987 to 1992.

The son of a headmaster, Smith was born in Dalmally, Scotland in 1938, and grew up in Ardrishaig in Argyll and Bute. He attended Dunoon Grammar School, lodging in the town with a landlady and going home during the holidays, before enrolling at the University of Glasgow, where he studied History from 1956 to 1959, and then Law, from 1959 to 1962. He joined the Labour Party in 1956.

After graduating, Smith practised as a solicitor for a year. He was then elected to the Faculty of Advocates (the Scottish equivalent of being called to the bar).

Smith first stood as a Labour parliamentary candidate at a by-election in 1961 in the East Fife constituency; he contested that seat again in the 1964 general election. At the 1970 general election, he was elected as Member of Parliament (MP) for North Lanarkshire succeeding Margaret Herbison. Smith defied the Labour whips in 1971, joining Labour MPs led by Roy Jenkins who voted in favour of entry to the European Economic Community. These included Roy Hattersley, Shirley Williams, Bill Rodgers and David Owen all of whom he was later to sit with in the Callaghan cabinet.

In October 1974, Harold Wilson offered Smith the post of Solicitor General for Scotland. Smith turned it down, not wishing his political career to become sidelined as a law officer. He was instead made an Under-Secretary of State at the Department of Energy. In December 1975, he was made a Minister of State. When James Callaghan became Prime Minister, Smith became a Minister of State at the Privy Council Office, serving with Labour's Deputy leader, Michael Foot, the Lord President of the Council and Leader of the House of Commons. In this position Smith piloted the highly controversial devolution proposals for Scotland and Wales through the House of Commons. Smith's adroit handling of these proposals impressed Callaghan, and in November 1978, when Edmund Dell retired, Callaghan appointed Smith Secretary of State for Trade. In this post, Smith was the youngest member of the cabinet, and served there until the 1979 general election.

In the early 1980s, Smith was Shadow Energy Secretary. He became a QC in 1983, the same year that the constituency became Monklands East. Smith acted as Roy Hattersley's campaign manager for the party leadership election in October 1983 and after serving a year as Shadow Employment Secretary, was Shadow Secretary of State for Trade and Industry between late 1984 and 1987.

Shadow Chancellor of the Exchequer

Smith was appointed Shadow Chancellor by Neil Kinnock in July 1987 after the Labour Party's general election defeat. He suffered a serious heart attack whilst Shadow Chancellor of the Exchequer on 9 October 1988 and was forced to spend three months away from Westminster to recover. On that occasion, he had complained of chest pains the night before, and had to be persuaded to cancel a flight to London so he could go to hospital for a check-up. He was examined at the Edinburgh Royal Infirmary by an ECG. The doctor who examined him said "Whatever it is, we don't think it is your heart". Then Smith suddenly collapsed and was briefly unconscious before coming around. He spent three days in intensive care before leaving hospital on 20 October 1988, and made a full recovery.

Smith made modifications to his lifestyle by going on a 1,000-calories per day diet, cutting down on rich foods and fine wines, giving up smoking and taking up Munro bagging and by the time of his death, he had succeeded in climbing 108 of the 277 Scottish Munros (mountains over 3,000 feet above sea level at the summit). His weight dropped from 15 stone 5 pounds (98 kg) at the time of the first heart attack, to 12 stone 10 pounds (81 kg) when he returned to Parliament on 23 January 1989.

Despite a quiet, modest manner, and his politically moderate stance, he was a witty, often scathing speaker. Smith was named as Parliamentarian of the Year twice: first in November 1986 for his performances during the Westland controversy, during which Leon Brittan resigned and second in November 1989 for taking Nigel Lawson to task over the state of the economy and over his difficult relationship with Sir Alan Walters, the Prime Minister's economic adviser. Smith made two notably witty attacks on Lawson that year. On 7 June 1989, he sang the theme tune for the soap Neighbours at the dispatch box, lampooning the differences between Lawson and Sir Alan Walters, who was critical of Lawson's policies but whom Thatcher refused to sack. Then on 24 October, he made another scathing attack on the differences. Two days later, Lawson resigned, followed shortly afterwards by Walters.

Smith was a member of the Steering Committee of the Bilderberg Group.[1]

Although Labour had now been out of power for 13 years, their performance in the 1992 election had been much better than in the previous three. They had cut the Conservative majority from 102 seats to 21, and for most of the three years leading up to the election, opinion polls had indicated that Labour were likelier to win the election than the Conservatives. The resignation of long-serving but increasingly unpopular Conservative prime minister Margaret Thatcher, and the well-received election of John Major as her successor, had seen the comfortable Labour lead in the opinion polls wiped out and in the 17 months leading up to the election, its outcome had become much harder to predict. Much of the blame had been placed on Labour's "shadow budget" drawn up by Smith, which included raising the top rate of income tax from 40p in the pound to 50p, and the Conservative election campaign was centred on warning voters that they would face higher taxes under a Labour government.[2]

In September 1992, Smith made his maiden speech as party leader, in which he attacked the Government's ERM debacle eight days earlier. He referred to John Major as "the devalued Prime Minister of a devalued Government". At Labour's party conference, Smith branded Major and Norman Lamont the "Laurel and Hardy of British politics". This echoed his attacks on Major's government made before the 1992 election (while he was still shadow chancellor), most memorably when he labelled "irresponsible" Conservative plans for cutting income tax to 20%,[3] and joked at a Labour Party rally in Sheffield that the Conservatives would have a box-office disaster with "Honey, I Shrunk the Economy" – in reference to the recent Disney motion picture Honey, I Shrunk the Kids – mocking the recession which was plaguing the British economy at the time.[4]

In a June 1993 debate, Smith again savaged the Conservative Government, saying that under John Major's premiership, "the man with the non-Midas touch is in charge. It is no wonder that we live in a country where the Grand National does not start and hotels fall into the sea" (in reference to the 1993 Grand National, which was cancelled after a false start, and to Holbeck Hall Hotel, which had recently collapsed off a cliff). During the same debate, Smith commented on a recent Government defeat in the Newbury by-election, a poor showing in the local elections and a subsequent Cabinet reshuffle by saying that "if we were to offer that tale of events to the BBC Light Entertainment Department as a script for a programme, I think that the producers of Yes Minister would have turned it down as hopelessly over the top. It might have even been too much for Some Mothers Do 'Ave 'Em". In the same speech, Smith also attacked the Conservatives' broken election promises (in particular Lamont's recent Budget decision to impose VAT on domestic energy bills) – claiming he possessed the last copy of a 1992 policy document "to escape the Central Office shredder". He also performed very well in the July 1993 motion of confidence debate on the Conservative government.

Despite his dispatch box successes (Smith was always more effective in the House of Commons than on platforms or at Prime Minister's Questions, though he began to improve at the latter towards the end of his life), Tony Blair and Gordon Brown were, under Smith's leadership, restless and privately anxious that the party had adopted a "One more heave" approach and had become over-cautious in tackling the legacy of "tax and spend".

Despite this, during his time as leader of the Labour Party, Smith abolished the trade union block vote at Labour party conferences and replaced it with "One member, one vote" at the 1993 party conference. He also committed a future Labour government to establishing a Scottish Parliament, an aim fulfilled by his successors after his death (most notably his close friend Donald Dewar). During Smith's tenure as leader the Labour party gained a significant lead in the polls over the Conservatives; on 5 May 1994, one week before Smith's death, the Conservatives suffered a major defeat in the British council elections, their worst in over 30 years. This happened in spite of the strong economic recovery and reduction of unemployment which had followed the declaration of the recession's end in April 1993.[5] Labour's opinion poll lead was shown to be as high as 23% in May 1994.

On the evening of 11 May 1994, with around 500 people present, Smith made a speech at a fundraising dinner at Park Lane Hotel, London, saying "The opportunity to serve our country—that is all we ask". At 8:05 a.m. the following morning, whilst in his Barbican flat, Smith suffered a fatal heart attack. His wife phoned an ambulance and he was rushed to Saint Bartholomew's Hospital where he died at 9:15 a.m., having never regained consciousness. On 28 April, a fortnight before his death, Smith had visited the same accident and emergency department to campaign against its proposed closure. The doctor who had served as his tour guide, Professor Mike Besser, tried unsuccessfully to save Smith's life.

In response to his death, John Major paid tribute in the House of Commons to Smith, culminating in the now well-known line, that he and Smith "would share a drink: sometimes tea, sometimes not tea".[6][7] It was reported that there was weeping in the chamber.[8]

On the day of his death, the BBC 9 O'Clock News was extended to an hour as opposed to the usual half-hour. This replaced the medical drama which was due to follow at 9:30, coincidentally entitled Cardiac Arrest. During Question Time that evening, panellists paid tribute to Smith instead of debating. George Robertson and Menzies Campbell were among the participants. 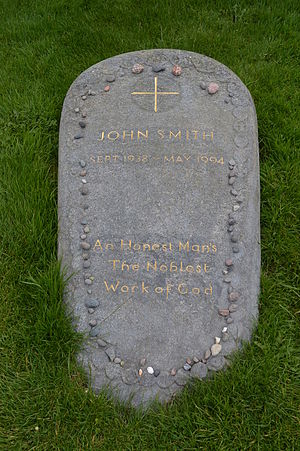 Gravestone of late leader of the Labour party, John Smith, on the island of Iona, Scotland.

On 20 May 1994, after a public funeral service in Cluny Parish Church, Edinburgh which was attended by almost 1,000 people, Smith was buried in a private family service on the island of Iona, at the sacred burial ground of Reilig Odhráin, which contains the graves of several Scottish kings as well as monarchs of Ireland, Norway and France.[9] His grave is marked with an epitaph quoting Alexander Pope: "An honest man's the noblest work of God".[10] His close friend Donald Dewar was the only political figure at the funeral; Dewar also acted as one of Smith's pallbearers. On 14 July 1994, a memorial service for Smith took place at Westminster Abbey and was attended by over 2,000 people. The Archbishop of Canterbury gave an address.

Smith's biographer, Mark Stuart, claimed that Smith could have won Labour a parliamentary victory in 1997 on a scale similar to that achieved by Tony Blair because of the combination of the Black Wednesday debacle and Conservative divisions over Europe from 1992. Stuart argues that the lack of a "Blair effect" would have meant that the Conservative Party would have held slightly over 200 seats in the House of Commons, leaving the Conservatives in a position similar to that of Labour in 1983.[11]

Smith was married to Elizabeth Bennett from 5 July 1967 until his death. Elizabeth Smith was created Baroness Smith of Gilmorehill in 1995. They had three daughters, one of whom, Sarah Smith, has served as the Washington correspondent for Channel 4 news and now works for BBC Scotland. Their other daughters are Jane, a costume designer, and Catherine, a lawyer.[12]