John Jackson Sparkman (December 20, 1899 – November 16, 1985) was an American politician from the U.S. state of Alabama. A Southern Democrat, Sparkman served in the U.S. House of Representatives and the U.S. Senate from 1937 until 1979. He was the Democratic Party's nominee for Vice President as Adlai Stevenson's running mate in the 1952 U.S. presidential election.

Sparkman, a son of Whitten Joseph and Julia Mitchell (Kent) Sparkman, was born on a farm near Hartselle, in Morgan County, Alabama.[2] He grew up in a four-room cabin with his eleven brothers and sisters. His father was a tenant farmer and doubled as the county's deputy sheriff. As a child, John Sparkman worked on his father's farm picking cotton.[3]

He attended a one-room elementary school in rural Morgan County, then walked four miles every day to his high school.[4] Sparkman graduated from Morgan County High School in 1917 and enrolled in the University of Alabama at Tuscaloosa.[5] During World War I, he was a member of the Students Army Training Corps .[6] Sparkman worked shoveling coal in the university's boiler room to help pay for his education.[7] He worked on the The Crimson White (the university's newspaper), becoming the paper's editor-in-chief, and served as his class's student-body president.[8] Sparkman was awarded a teaching fellowship in history and political science,[9] he became a founding member of the Gamma Alpha Chapter of Pi Kappa Alpha in 1921, and was chosen as the university's "most outstanding senior" the same year.[8] He received his Bachelor of Arts in 1921, and his bachelor of laws from the University of Alabama School of Law in 1923. In 1924, Sparkman earned his master's degree in history, writing his master thesis titled "The Kolb-Oates Campaign of 1894," on former Confederate colonel William C. Oates's 1894 campaign for Governor of Alabama.[10]

Sparkman briefly worked as a high school teacher before he was admitted to the Alabama State Bar in 1925. He commenced his practice in Huntsville.[11] He was also an instructor at Huntsville College from 1925 to 1928.[12] He was appointed as a U.S. Commissioner (magistrate judge) for Alabama's northern judicial district, serving from 1930 to 1931.[2] 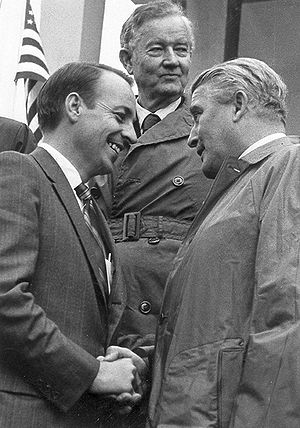 In 1970 Wernher von Braun (right) was honored for his career in Huntsville, Alabama, with the celebration of "Wernher von Braun Day." Among those participating were Sparkman (center) and Alabama Governor Albert Brewer (left).

After Representative Archibald Hill Carmichael announced his retirement in 1936, Sparkman ran in the Democratic primary for the open seat. A teacher of the Big Brother Class at the First Methodist Church in Huntsville, his campaign was successfully launched through fundraising, campaigning and advertising by students in his Sunday class.[14] Sparkman was elected to the United States House of Representatives in the 1936 election, defeating Union Party candidate, architect Harry J. Frahn[16] with 99.7% of the vote.[17] He was reelected in 1938, 1940, 1942, and 1944, serving in the 75th, 76th, 77th, 78th, and 79th Congresses. In 1946 he served as House Majority Whip.[18] He was reelected in the 1946 House election to the 80th Congress and on the same date was elected to the United States Senate in a special election to fill the vacancy caused by the death of John H. Bankhead II, for the term ending on January 3, 1949. Sparkman resigned from the House of Representatives immediately following the election and began his Senate term on November 6, 1946. He served until his retirement on January 3, 1979, having not sought reelection in 1978.

The 1943 Sparkman Act, which allowed women physicians to be commissioned as officers in the armed forces, was named for him, after lobbying by Dr. Emily Dunning Barringer.

In 1949, Sparkman was instrumental in convincing the United States Department of the Army to transfer the missile development activities from Fort Bliss, Texas, to Redstone Arsenal. This brought Wernher von Braun and the German Operation Paperclip scientists and engineers to Huntsville, forming the foundation to what eventual became the NASA Marshall Space Flight Center.

In 1952, he was the Democratic Party's nominee for Vice President, running on the ticket of Adlai Stevenson. However, the election was won by the Republican candidate, Dwight D. Eisenhower. Sparkman was slated against Richard M. Nixon, a senatorial colleague from California.

In 1956, Sparkman was one of 82 representatives and 19 senators who signed the Southern Manifesto in opposition to the 1954 U.S. Supreme Court decision Brown v. Board of Education and racial integration. In 1956, the Democrats did not renominate Sparkman as Stevenson's vice presidential running mate, opting instead for U.S. Senator Estes Kefauver of neighboring Tennessee (partly because he had refused to sign).[19] He voted against HR 6127, the Civil Rights Act of 1957.[20]

In 1960, Sparkman defeated the Republican Julian E. Elgin of Montgomery, who received 164,868 votes (29.8 percent) in the Senate contest. Six years later, Elgin ran again against Sparkman as an Independent but polled few votes. In 1966, Sparkman defeated another Republican, John Grenier, the former state GOP chairman and an attorney from Birmingham, who polled 39 percent of the vote.

Initially Grenier had planned to run for governor in 1966, and James D. Martin was poised to oppose John Sparkman, as Martin had four years earlier against Sparkman's colleague, J. Lister Hill. However, The New York Times predicted toppling the "tight one-party oligarchy" would be a herculean task. Though Sparkman trailed in some polls, The Times speculated that he would rebound because Alabamians were accustomed to voting straight Democratic tickets.[21]

On November 16, 1985, John Sparkman died of a heart attack at Big Springs Manor Nursing Home in Huntsville, Alabama. He was eighty-five.[24] Survived by his wife and daughter, he was interred in Huntsville at the historic Maple Hill Cemetery.

A history of Senator Sparkman's career in the House of Representatives was written in 1990 by Dr. Henry Walker.