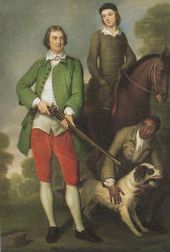 John Spencer, his only son and their servant.

Born the Hon. John Spencer, he was the youngest son of the 3rd Earl of Sunderland and his wife, Lady Anne Churchill. In 1732, he succeeded his cousin, William Godolphin, Marquess of Blandford as Member of Parliament (MP) for Woodstock, a seat he held until 1746. He was involved in the foundation of the Foundling Hospital, famously championed by Thomas Coram, William Hogarth and others. Spencer is listed alongside these gentlemen as one of the organisation's founding governors.

In mid-January 1733, Spencer inherited his father's family's estates in Bedfordshire, Northamptonshire (including Althorp) and Warwickshire and his grandmother, the Duchess of Marlborough's property, including Wimbledon Park. He was married a month later on 14 February to Georgiana Caroline Carteret (the third daughter and co-heir of Viscount Carteret, later Earl Granville); their only son was John, who was later created Earl Spencer in 1765. Spencer died in 1746, three years after their 8-year-old daughter Diana, and his wife was remarried four years later to the 2nd Earl Cowper. The Althorp estate remains the seat of the earls, but the Wimbledon estate was later sold by the 4th Earl in 1846.