Atholl was the only child of George Murray, 6th Duke of Atholl, and Anne, daughter of Henry Home-Drummond. He was educated at Eton.[1]

Atholl served in the Scots Fusilier Guards, achieving the rank of captain in 1864. The latter year he also succeeded his father in the dukedom. In 1865 he registered the additional surname of Stewart at the Lyon Court. From 1878 to 1917 he served as Lord-Lieutenant of Perthshire. He was appointed a Knight of the Thistle in 1868 and was Chancellor of the Order of the Thistle from 1913 until his death.[1] He is also remembered for having devoted years of his life to editing the records of the family and the related history.[2]

Atholl married Louisa, daughter of Sir Thomas Moncreiffe of that Ilk, 7th Baronet, in 1863. They had four sons (of whom the eldest died in infancy) and three daughters (all of whom survived to adulthood), including the Scottish folklorist Lady Evelyn Stewart Murray,[3] and the collector of early Scottish music, Lady Dorothea Ruggles-Brise. The Duchess of Atholl died in Italy in July 1902, aged 58. Atholl remained a widower until his death at Blair Castle in January 1917, aged 76. After his death, the dukedom passed to his second but eldest surviving son, John Stewart-Murray, 8th Duke of Atholl also known as John Murray,[1] and later to his third son, Major James Stewart-Murray, 9th Duke of Atholl also known as James Murray. The 7th Duke has no known surviving descendants. 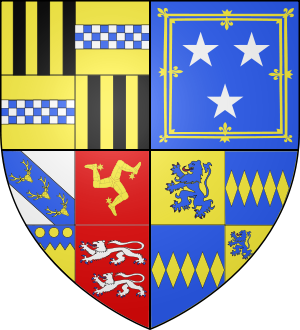 Arms of the Dukes of Atholl