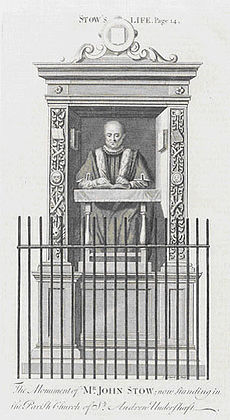 His father, Thomas Stow, was a tallow chandler and John was born circa 1525 in the City parish of St Michael, Cornhill, then at the heart of London's metropolis. His father is recorded as paying rent of 6s 8d per year for the family dwelling, and as a youth Stow would fetch milk every morning from a farm on the land nearby to the east owned by the Minoresses of the Convent of St. Clare.[1]

Stow did not take up his father's tallow chandlery trade, instead becoming an Apprentice then Freeman of the Merchant Taylors' Company in 1547, by which stage he had set up business in premises close to Aldgate Well, close to Leadenhall Street and Fenchurch Street.

Circa 1560 he started upon his major work with which his name is best known and about 10 years later he moved to the parish of St Andrew in the Ward of Lime Street, residing there in comfortable surroundings until his death in 1605.

Stow made keen acquaintance of the leading antiquarians of his time, including William Camden, before in 1561 producing his first work, The woorkes of Geffrey Chaucer, newly printed with divers additions whiche were never in printe before. This was followed in 1565 by his Summarie of Englyshe Chronicles which was reprinted several times, with slight variations, during his lifetime. Grenville's Library is believed to have had a first-edition of Stow's Survey of London and the British Library holds copies of his editions of 1567, 1573, 1590, 1598 and 1604. Stow's 1567 edition makes mention in its frontispiece of a rival publication by Richard Grafton (c. 1500 - c. 1572), a dispute which later magnified.

Stow's antiquarian interests attracted suspicion from the ecclesiastical authorities as a person "with many dangerous and superstitious books in his possession", and in 1568 his house was searched. An inventory was made of all the books at his home especially those "in defence of papistry", but he was able to satisfy his interrogators as to the soundness of his Protestantism. A second attempt to incriminate him was made in 1570 also without success. In 1580, Stow published his Annales, or a Generale Chronicle of England from Brute until the present yeare of Christ 1580; reprinted in 1592, 1601 and 1605,[2] the last being continued to 26 March 1605, or within ten days of his death; editions "amended" by Edmund Howes appeared in 1615 and 1631. 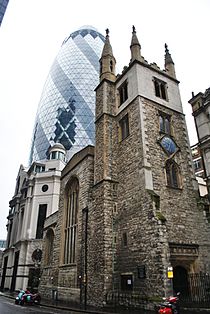 The work for which Stow is best known is his Survey of London published in 1598, which is not only interesting for the quaint simplicity of its style and its amusing descriptions and anecdotes, but of unique value for its detailed account of the buildings, social conditions and customs of London in the time of Queen Elizabeth I. A second edition appeared in his lifetime in 1603, a third with additions by Anthony Munday in 1618, a fourth by Munday and Dyson in 1633, a fifth with interpolated amendments by John Strype in 1720, and a sixth by the same editor in 1754. The edition of 1798 was reprinted, edited by William John Thoms, in 1842, in 1846, and with illustrations in 1876. By Archbishop Matthew Parker's patronage, Stow was persuaded to produce a version of Flores historiarum by Matthew of Westminster published in 1567, then the Chronicle of Matthew Paris in 1571, and the Historia brevis of Thomas Walsingham in 1574. In the Chronicle of England 1590 Stow writes: "To The Honorable Sir John Hart, Lord Maior. The Chronicle written before that nothing is perfect the first time, and that it is incident to mankinde to erre and slip sometimes, but the point of fanta[s]tical fooles to preserve and continue in their errors."

At the request of Archbishop Parker he had compiled a "farre larger volume," a history of Britain, but circumstances were unfavourable to its publication and the manuscript was lost. Additions to the previously published works of Chaucer were twice made through Stow's "own painful labours" in the edition of 1561, referred to above, and also in 1597. A number of Stow's manuscripts are in the Harley Collection at the British Museum. Some are in the Lambeth Library (No. 306) and from the volume which includes them were published by the Camden Society, edited by James Gairdner, Three Fifteenth Century Chronicles, with Historical Memoranda by John Stowe the Antiquary, and Contemporary Notes of Occurrences written by him (1880).

Stow's literary efforts did not prove very remunerative, but nonetheless he accepted relative poverty with cheerful spirit: Ben Jonson relates once walking with him when Stow jocularly asked two mendicant cripples "what they would have to take him to their order." In March 1604 King James I authorised Stow and his associates to collect "amongst our loving subjects their voluntary contributions and 'kind gratuities'", and himself began "the largesse for the example of others". Whilst such royal approval was welcome it reaped dividend too slowly for Stow to enjoy any substantial benefit during his lifetime.

Stow is buried at the Church of St Andrew Undershaft[3] on the corner of Leadenhall Street and St. Mary Axe, where a monument erected by his widow with a terracotta figure of him remains. Such is his legend, as the Father of London History, that his monument is re-equipped with a new quill pen quinquennially by the Lord Mayor and the Master Merchant Taylor alternately.[4]