John Strachan (/ˈstrɔːn/; April 12, 1778 – November 1, 1867) was an influential figure in Upper Canada and the first Anglican Bishop of Toronto. He is best known as a political bishop who held many government positions and promoted education from common schools to helping to found the University of Toronto.

Gauvreau says in the 1820s he was "the most eloquent and powerful Upper Canadian exponent of an anti-republican social order based upon the tory principles of hierarchy and subordination in both church and state."[1] Craig characterizes him as "the Canadian arch tory of his era" for his intense conservatism. Craig argues that Strachan "believed in an ordered society, an established church, the prerogative of the crown, and prescriptive rights; he did not believe that the voice of the people was the voice of God."[2]

Dr. Strachan built his home in a large yard bound by Simcoe Street, York Street, and Front Street. It was a two storey building that was the first building in Toronto to use locally manufactured bricks. The gardens and grounds of the property occupied the entire square and became a local Toronto landmark, being given the name "The Bishop's Palace". After Dr. Strachan's death the home was converted into a private hotel called The Palace Boarding House.[3]

Strachan was the youngest of six children born to the overseer of a granite quarry in Aberdeen, Scotland. He graduated from King's College, Aberdeen in 1797. After his father died in an accident in 1794, Strachan tutored students and taught school to finance his own education.[4] 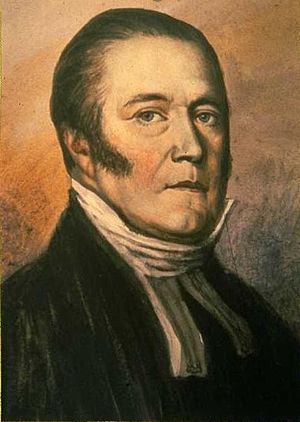 In 1799 he emigrated to Kingston, Upper Canada to tutor the children of other British and United Empire Loyalist immigrants. In Kingston one of his students was John Beverley Robinson, future attorney general of Upper Canada. At the same time, he studied to become ordained.

In 1803 Strachan was ordained as a priest in the Church of England. He moved to Cornwall, Ontario, where he taught at a grammar school and married Ann McGill née Wood, widow of Andrew McGill, in 1807.[5] Together they had nine children, some of whom died young.[6]

He moved to York, Ontario, just before the War of 1812, where he became rector of St. James' church (which would later become his cathedral) and headmaster of the Home District Grammar School.[3] This school, also known as "The Blue School" taught students from five to seventeen and emphasized a practical means of learning. Students recited abridged speeches from the House of Commons, learned Latin, and were encouraged to ask questions of their fellow pupils.[7] During the Battle of York in 1813, Strachan negotiated the surrender of the city with American general Henry Dearborn. He is credited with saving the city from American troops eager to loot and burn it.

After the war he became a pillar of the Family Compact, the conservative elite that controlled the colony. He was a member of the Executive Council of Upper Canada from 1815 to 1836 as well as the Legislative Council from 1820 to 1841. He was an influential advisor to the Lieutenant-Governors of Upper Canada and the other members of the Councils and Assemblies, many of whom were his former students. The "Family Compact" were the elite who shared his fierce loyalty to the British monarchy, his strict and exclusive Toryism and the Established Church (Anglicanism), and his contempt for slavery, Presbyterians, Methodists, American republicanism, and reformism. Strachan was a leader of anti-American elements, which he saw as a republican and democratic threat that promised chaos and an end to a well-ordered society.[8]

Strachan invented the "militia myth" to the effect that the local militia had done more to defend Canada than the British army. Canadian historians reject the militia myth.[9][10]

Strachan supported a strict interpretation of the Constitutional Act of 1791, claiming that clergy reserves were to be given to the Church of England alone rather than to Protestants in general. In 1826 this interpretation was opposed by Egerton Ryerson, who advocated the separation of church and state and argued that the reserves should be sold for the benefit of education in the province. Although Strachan controlled the reserves through the Clergy Corporation for much of this time, he was ultimately forced to oversee the selling off of most of the land in 1854.[11]

File:John Strachan bust.jpg
The bust of Strachan in the Trinity quad, Trinity College, Toronto, as seen on a winter morning

Much of Strachan's life and work was focused on education. He wanted Upper Canada to be under Church of England control, in order to avoid American influence. He tried to set up annual reviews for grammar schools to make sure they were following Church of England doctrines, and tried to introduce Andrew Bell's education system from Britain, although these acts were vetoed by the Legislative Assembly. In 1827 Strachan chartered King's College, an Anglican university, although it was not actually created until 1843.

In 1839 he was consecrated the first Anglican bishop of Toronto alongside Aubrey George Spencer, the first Bishop of Newfoundland, at Lambeth Palace August 4.]. He founded Trinity College in 1851 after King's College was secularized as the University of Toronto.

In 1835 he was forced to resign from the Executive Council, and he resigned from politics in 1841 after the Act of Union. He continued to influence his former students, although the Family Compact declined in the new Province of Canada. Strachan helped organize the Lambeth Conference of Anglican bishops in 1867 but died that year before it was held. Strachan was buried in a vault in the chancel of St. James' Cathedral. He was succeeded by Alexander Neil Bethune.

Strachan was concerned with the Native peoples and called on people to embrace these "sons of nature" as brothers. He claimed that the United States desired Upper Canada primarily to exterminate the indigenous tribes and free up the West for American expansion. Strachan defended the autonomy of the Natives, the superiority of British governance, and the centrality of Upper Canada in the theatre of war against the U.S. He rejected the prevalent assumption at the time that Natives were simply pawns in the contest and gave an original and influential explanation of why Upper Canada was vital to both Native and Imperial concerns.[12]

Strachan was intensely devoted to the promotion of the Anglican position in Canada. He was born a Presbyterian in Scotland, but he never fully accepted it and first received communion at an Anglican church in Kingston. He was strongly influenced by the High Church bishop of New York, John H. Hobart. Strachan preached that the Anglican Church was a branch of the universal church, and that it was independent of both Pope and king. Like most Protestants of the era he denounced the Roman Catholic Church for corruption. He rejected the revivalism of the Methodists as an American heresy, and stressed the ancient practices and historic liturgy of his church. While a High Churchman, Strachan's view alienated many of his clergy and laity who were drawn from the ranks of Irish Protestant immigrants of more low-church persuasion.[13]

He actively promoted missionary work, using the Diocesan Theological Institute at Cobourg to train clergy to handle frontier conditions. Much of his effort after 1840 was undermined by theological disputes in the Church, as between High Church tractarians and Low Church evangelicals. He also faced external attacks from political reformers and rival denominations.[14]