John Stuart, 3rd Earl of Bute KG PC (25 May 1713 – 10 March 1792), styled Lord Mount Stuart before 1723, was a Scottish nobleman who served as Prime Minister of Great Britain (1762–1763) under George III, and was arguably the last important favourite in British politics. He was the first Prime Minister from Scotland following the Acts of Union in 1707.

A close relative of the Clan Campbell (his mother was a daughter of the 1st Duke of Argyll), Bute succeeded to the Earldom of Bute (named after the Isle of Bute) upon the death of his father, James Stuart, 2nd Earl of Bute, in 1723. He was brought up thereafter by his maternal uncles, the 2nd Duke of Argyll and Archibald Campbell, 3rd Duke of Argyll, 1st and only Earl of Ilay, Viscount and Earl of Hay. Bute studied at Eton College (1720–1728) and the University of Leiden, Netherlands (1728–1732), where he graduated with a degree in civil and public law. On 24 August 1736, he married Mary Wortley Montagu (daughter of Sir Edward and Lady Mary Wortley Montagu), bringing the large Wortley estates to his family. In 1737, due to the influence of his uncles, he was elected a Scottish representative peer, but he was not very active in the Lords and was not reelected in 1741. For the next several years he retired to his estates in Scotland to manage his affairs and indulge his interest in botany.

During the Jacobite Rebellion of 1745, Bute moved to Westminster, London, and two years later met Prince Frederick, the Prince of Wales there, soon becoming a close associate of the Prince. Upon the Prince's death in 1751, the education of his son, Prince George, the new Prince of Wales, became a priority and in 1755 Bute was appointed as his tutor. Bute arranged for the Prince and his brother Prince Edward to follow a course of lectures on natural philosophy by the itinerant lecturer Stephen Demainbray. This led to an increased interest in natural philosophy on the part of the young prince and was one in a series of events that led to the establishment of the George III Collection of natural philosophical instruments. Furthermore, following the death of the Prince Frederick, Bute became close to his widow, Augusta of Saxe-Gotha, the Dowager Princess of Wales. It was rumoured that the couple were having an affair, and indeed soon after John Horne (an associate of the Prince of Wales) published a scandalous pamphlet alluding to a liaison between Bute and the Princess. Rumours of this affair were almost certainly untrue, as Bute was by all indications happily married, and he held sincere religious beliefs against adultery. In 1780 Bute was elected as the first President of the Society of Antiquaries of Scotland.

The standard author abbreviation Stuart is used to indicate this individual as the author when citing a botanical name.[2] 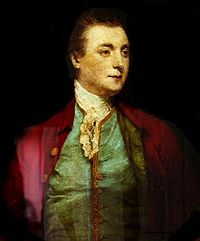 The 3rd Earl of Bute

Because of the influence he had over his pupil, Bute expected to rise quickly to political power following George's accession to the throne in 1760, but his plans were premature. Re-elected as a Scottish representative peer in 1760, he was indeed appointed the de facto Prime Minister, and was successful in ending the Whig dominance and the Seven Years' War, but King George began to see through him, and turned against him after being criticised for an official speech which the press recognised as Bute's own work. Bute also proposed a controversial Cider tax which produced enormous hostility in cider-producing areas. 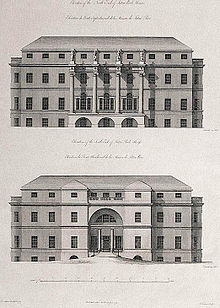 The north and south fronts of Luton Hoo as designed by Robert Adam. 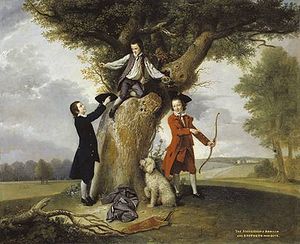 Three sons of the Earl of Bute 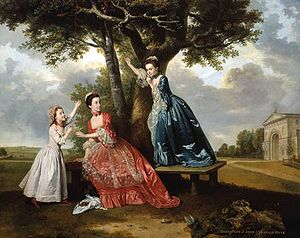 Three daughters of the Earl of Bute

The journalist John Wilkes published a newspaper called The North Briton, in which both Bute and the Dowager Princess of Wales were savagely satirised. Bute resigned as prime minister shortly afterwards, though he remained in the House of Lords a Scottish representative peer until 1780. He remained friendly with the Dowager Princess of Wales, but her attempts to reconcile him with George III proved futile.

For the remainder of his life, Bute remained at his estate in Hampshire, where he built himself a villa called Highcliffe near Christchurch.[3] From there he continued his pursuit of botany and became a major literary and artistic patron. Among his beneficiaries were Samuel Johnson, Tobias Smollett, Robert Adam, William Robertson and John Hill. He also gave considerably to the Scottish universities. His botanical work culminated in the publication of Botanical Tables Containing the Families of British Plants in 1785. Even after his retirement, Bute was accused by many Americans in the years leading up to the American Revolutionary War as having an undue corrupting influence over the British government.[4] He died at his home in South Audley Street, Grosvenor Square, Westminster, from complications of a fall suffered while staying at Highcliffe, and was buried at Rothesay on the Isle of Bute.[3]

The flowering plant genus Stuartia is named after him. According to historian John Naish, the 18th-century expression "Jack Boot" meaning a stupid person originated as disparagement of Stuart's performance as Prime Minister.[4]

The Earl held the Manor of Luton and had Luton Hoo designed and built by the neoclassical architect Robert Adam. Work commenced in 1767. The original plan had been for a grand and magnificent new house. However, this plan was never fully executed and much of the work was a remodelling of the older house. Building work was interrupted by a fire in 1771, but by 1774 the house, though incomplete, was inhabited. Dr. Samuel Johnson visiting the house in 1781 is quoted as saying, "This is one of the places I do not regret coming to see...in the house magnificence is not sacrificed to convenience, nor convenience to magnificence".