John Douglas Surman (born 30 August 1944) is an English jazz saxophone, bass clarinet and synthesizer player, and composer of free jazz and modal jazz, often using themes from folk music as a basis. He has also composed and performed much music for dance performances and film soundtracks.[1] 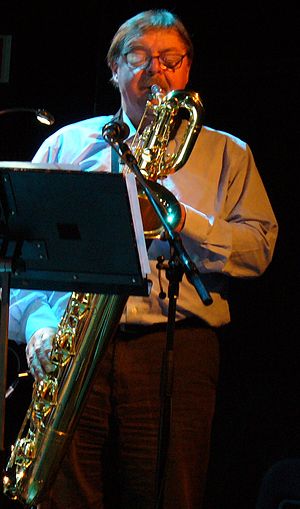 John Surman with BBB in 2014.
(Photo by Knut Andersen)

Surman was born in Tavistock, Devon. He initially gained recognition playing baritone saxophone in the Mike Westbrook Band in the mid-1960s, and was soon heard regularly playing soprano saxophone and bass clarinet as well.[1] His first playing issued on a record was with the Peter Lemer Quintet in 1966. After further recordings and performances with jazz bandleaders Mike Westbrook and Graham Collier and blues-rock musician Alexis Korner,[2] he made the first record under his own name in 1968.

In 1969 he founded the well-regarded and influential group The Trio along with two expatriate American musicians, bassist Barre Phillips and drummer Stu Martin.[3] In the mid-1970s he founded one of the earliest all-saxophone jazz groups, S.O.S., along with alto saxophonist Mike Osborne and tenor saxophonist Alan Skidmore. During this early period he also recorded with (among others) saxophonist Ronnie Scott, guitarist John McLaughlin, bandleader Michael Gibbs, trombonist Albert Mangelsdorff, and pianist Chris McGregor's Brotherhood of Breath.

By 1972 he had begun experimenting with synthesizers. That year he recorded Westering Home, the first of several solo projects on which he played all parts himself via overdubbing. He recorded his final album with Mike Westbrook, Citadel/Room 315 in 1975.[1]

His relationship with ECM Records has also been continuous from the late 1970s to the present, as Surman has recorded prolifically for the label playing bass clarinet, recorders, soprano and baritone saxophones and using synthesisers, both solo with a wide range of other musicians.

In recent years he has composed several suites of music that feature his playing in unusual contexts, including with church organ and chorus (Proverbs and Songs, 1996); with a classical string quintet (Coruscating); and with the London Brass and Jack DeJohnette (Free and Equal, 2001). He has also played in a unique trio with Tunisian oud-player Anouar Brahem and bassist Dave Holland (Thimar, 1997); has performed the songs of John Dowland with singer John Potter formerly of the Hilliard Ensemble; and made contributions to the drum and bass album Disappeared by Spring Heel Jack.

With the Mike Westbrook Orchestra