John Surtees, CBE (born 11 February 1934) is a British former Grand Prix motorcycle road racer and Formula One driver. He is a four-time 500cc motorcycle World Champion – winning that title in 1956, 1958, 1959 and 1960 – the Formula One World Champion in 1964, and remains the only person to have won World Championships on both two and four wheels. He founded the Surtees Racing Organisation team that competed as a constructor in Formula One, Formula 2 and Formula 5000 from 1970 to 1978. He is also the ambassador of the Racing Steps Foundation.

Surtees is the son of a south London motorcycle dealer.[1] He had his first professional outing in the sidecar of his father's Vincent, which they won. However, when race officials discovered Surtees's age, they were disqualified.[1] He entered his first race at 15 in a grasstrack competition. In 1950, at the age of 16, he went to work for the Vincent factory as an apprentice.[1][2] He made his first headlines in 1951 when he gave Norton star Geoff Duke a strong challenge in an ACU race at the Thruxton Circuit.[1]

In 1955, Norton race chief Joe Craig gave Surtees his first factory sponsored ride aboard the Nortons.[1] He finished the year by beating reigning world champion Duke at Silverstone and then at Brands Hatch.[1] However, with Norton in financial trouble and uncertain about their racing plans, Surtees accepted an offer to race for the MV Agusta factory racing team, where he soon earned the nickname figlio del vento (son of the wind).[3]

In 1956 Surtees won the 500cc world championship,[4] MV Agusta's first in the senior class.[3] In this Surtees was assisted by the FIM's decision to ban the defending champion, Geoff Duke, for six months because of his support for a riders' strike for more starting money.[5] In the 1957 season, the MV Agustas were no match for the Gileras and Surtees battled to a third-place finish aboard a 1957 MV Agusta 500 Quattro.[1][4][6]

When Gilera and Moto Guzzi pulled out of Grand Prix racing at the end of 1957, Surtees and MV Agusta went on to dominate the competition in the two larger displacement classes.[1] In 1958, 1959 and 1960, he won 32 out of 39 races and became the first man to win the Senior TT at the Isle of Man TT three years in succession.[4][7] 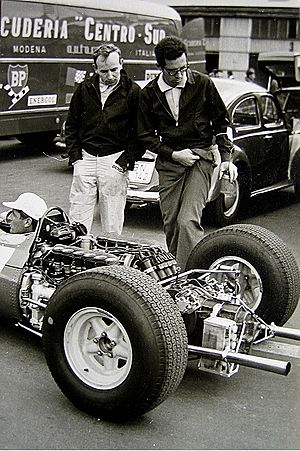 Surtees (left) and Mauro Forghieri in 1965 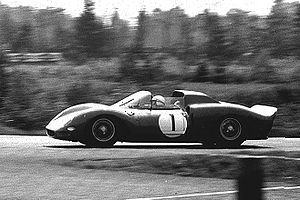 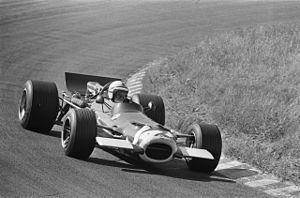 Surtees at the 1969 Dutch Grand Prix 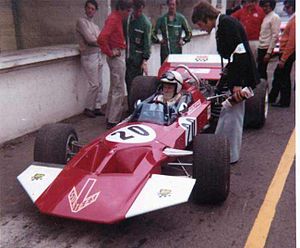 Surtees at the wheel of the Surtees TS7.

In 1960, at the age of 26, Surtees switched from motorcycles to cars full-time, making his Formula 1 debut racing for Lotus in the Monaco Grand Prix in Monte Carlo. He made an immediate impact with a second-place finish in only his second Formula One World Championship race, at the 1960 British Grand Prix, and a pole position at his third, the 1960 Portuguese Grand Prix.[2] After spending the 1961 season with the Yeoman Credit Racing Team driving a Cooper T53 "Lowline" managed by Reg Parnell and the 1962 season with the Bowmaker Racing Team, still managed by Reg Parnell but now in the V8 Lola Mk4, he moved to Scuderia Ferrari in 1963 and won the World Championship for the Italian team in 1964.[2][8]

On 25 September 1965, Surtees had a life-threatening accident at the Mosport Circuit (Ontario, Canada) whilst practicing a Lola T70 sports racing car.[2] A front upright casting had broken. A.J. Baime in his book Go Like Hell says Surtees came out of the crash with one side of his body four inches shorter than the other. Doctors set most of the breaks nonsurgically, in part by physically stretching his shattered body until the right-left discrepancy was under an inch – and there it stayed.

The 1966 season saw the introduction of new, larger 3-litre engines to Formula One. Surtees's debut with Ferrari's new F1 car was at the 1966 BRDC International Trophy at Silverstone, where he qualified and finished a close second behind Jack Brabham's 3-litre Brabham BT19. A few weeks later, Surtees led the Monaco Grand Prix, pulling away from Jackie Stewart's 2-litre BRM on the straights, before the engine failed. A fortnight later Surtees survived the first lap rainstorm which eliminated half the field and won the Belgian Grand Prix.

Due to perennial strikes in Italy, Ferrari could afford to enter only two cars (Ferrari P3s) for the 1966 24 Hours of Le Mans instead of its usual entry of three prototypes (a third P3 was entered by the N.A.R.T. and driven by Pedro Rodríguez and Richie Ginther). Under Le Mans rules in 1966 each car was allowed only two drivers per car. Surtees was omitted from the line-up and one team Ferrari was to be driven by Mike Parkes and Ludovico Scarfiotti and the other by Jean Guichet and Lorenzo Bandini. When Surtees questioned Ferrari team manager as to why, as the Ferrari team leader, he would not be allowed to compete, Dragoni told Surtees that he did not feel that he was fully fit to drive in a 24-hour endurance race because of the injuries he had sustained in late 1965. This excuse was deeply upsetting to Surtees, and he immediately quit the team.[citation needed] This decision likely cost both Ferrari and Surtees the Formula 1 Championship in 1966. Ferrari finished second to Brabham-Repco in the manufacturers' championship and Surtees finished second to Jack Brabham in the drivers' championship.[2][9] Surtees finished the season driving for the Cooper-Maserati team, winning the last race of the season and finishing second in the drivers' championship, 14 points behind Brabham.

Surtees competed with a T70 in the inaugural 1966 Can-Am season, winning three races of six to become champion over other winners Dan Gurney (Lola), Mark Donohue (Lola) and Phil Hill (Chaparral) as well as the likes of Bruce McLaren and Chris Amon (both in McLarens).

In December 1966, Surtees signed for Honda.[10] After a promising third place in the first race in South Africa, the Honda RA273 hit a series of mechanical problems. The car was replaced by the Honda RA300 for the Italian Grand Prix, where Surtees slipstreamed Jack Brabham to take Honda's second F1 victory by 0.2 seconds. Surtees finished fourth in the 1967 drivers' championship.[8]

The same year, Surtees drove in the Rex Mays 300 at Riverside, near Los Angeles, in a United States Auto Club season-ending road race. This event pitted the best American drivers of the day — normally those who had cut their teeth as professional drivers on oval dirt tracks — against veteran Formula One Grand Prix drivers, including Jim Clark and Dan Gurney.

In 1970, Surtees formed his own race team, the Surtees Racing Organisation, and spent nine seasons competing in Formula 5000, Formula 2 and Formula 1 as a constructor.[2] He retired from competitive driving in 1972, the same year the team had their greatest success when Mike Hailwood won the European Formula 2 Championship.[11] The team was finally disbanded at the end of 1978.

For a while in the 1970s Surtees ran a motorcycle shop in West Wickham, Kent and a Honda car dealership in Edenbridge, Kent. He continues his involvement in motorcycling, participating in classic events with bikes from his stable of vintage racing machines. He also remains involved in single-seater racing cars and held the position of chairman of A1 Team Great Britain, in the A1 Grand Prix racing series from 2005-7. His son, Henry Surtees competed in the FIA Formula 2 Championship, Formula Renault UK Championship and the Formula BMW UK championship for Carlin Motorsport,[12] before he died whilst racing in the Formula 2 championship at Brands Hatch on 19 July 2009.[13]

In 2013 he was awarded the Segrave Trophy in recognition of multiple world championships, and being the only person to win world titles on 2 and 4 wheels.

† The 500 cc race was stopped by bad weather, and the FIM excluded the race from the World Championship.