From Infogalactic: the planetary knowledge core
Jump to: navigation, search
Not to be confused with the 20th–21st century composer Sir John Tavener.
For other people named John Taverner, see John Taverner (disambiguation).

Nothing is known of Taverner's activities before 1524. He appears to have come from south, possibly being born in Tattershall, Lincolnshire, but there is no indication of his parentage. According to one of his own letters, he was related to the Yerburghs, a well-to-do Lincolnshire family. The earliest information is that in 1524 Taverner travelled from Tattershall to the Church of St Botolph in nearby Boston as a guest singer.[2] Two years later, in 1526, Taverner became the first Organist and Master of the Choristers at Christ Church, Oxford, appointed by Cardinal Thomas Wolsey. The college had been founded in 1525 by Cardinal Wolsey, and was then known as Cardinal College. Immediately before this, Taverner had been a clerk fellow at the Collegiate Church of Tattershall. In 1528 he was reprimanded for his (probably minor) involvement with Lutherans, but escaped punishment for being "but a musician". Wolsey fell from favour in 1529, and in 1530 Taverner left the college. He married a widow, one Rose Parrowe, probably in 1536, and she outlived him until 1553. During the last five months of the composer's life, he was an alderman in the city council of Boston. For about three years, previously, he was the treasurer of the Corpus Christi Gild, there in Boston.

As far as can be told, Taverner had no further musical appointments, nor can any of his known works be dated to after that time, so he may have ceased composition. It is often said that after leaving Oxford, Taverner worked as an agent of Thomas Cromwell assisting in the Dissolution of the Monasteries, although the veracity of this is now thought to be highly questionable. He is known to have settled eventually in Boston, Lincolnshire, where he was a small landowner and reasonably well-off. He is buried with his wife under the belltower at Boston Parish Church. (In the few existing copies of his signature, the composer actually spelled his last name "Tavernor.") The 20th-century composer Sir John Tavener has claimed to be his direct descendant. 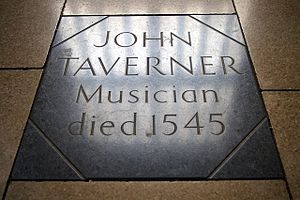 Most of Taverner's music is vocal, and includes masses, Magnificats and motets. The bulk of his output is thought to date from the 1520s. His best-known motet is Dum Transisset Sabbatum.

One of his best-known masses is based on a popular song called The Western Wynde (John Sheppard and Christopher Tye later also wrote masses based on this same song). Taverner's Western Wynde mass is unusual for the period because the theme tune appears in each of the four parts, excepting the alto, at different times. Perhaps his most celebrated work is his Missa Gloria tibi Trinitas, which Taverner probably composed during his years at Christ Church, Oxford. Commonly his masses are designed so that each of the four sections (Gloria, Credo, Sanctus-Benedictus and Agnus Dei) are about the same length, often achieved by putting the same number of repetitions of the thematic material in each. For example in the Western Wynde mass, the theme is repeated nine times in each section. As the sections have texts of very different lengths, he uses extended melismata in the movements with fewer words.

Several of his other masses use the widespread cantus firmus technique, where a plainchant melody with long note values is placed in an interior part, often the tenor. Examples of cantus firmus masses include Corona Spinea and Gloria Tibi Trinitas. Another technique of composition is seen in his mass Mater Christi, which is based upon material taken from his motet of that name, and hence known as a "derived" or "parody" mass.

The Missa Gloria tibi Trinitas[3] gave origin to the style of instrumental work known as an In nomine. Although this mass is in six parts, some more virtuosic sections are in reduced numbers of parts, presumably intended for soloists, a compositional technique used in several of his masses. The section at the words "in nomine ..." in the Benedictus is in four parts, with the plainchant in the alto. This section of the mass became popular as an instrumental work for viol consort. Other composers came to write instrumental works modelled on this, and the name In nomine was given to works of this type.

The life of Taverner was the subject of Taverner, an opera by Peter Maxwell Davies.