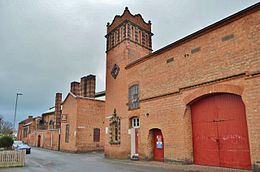 John Taylor & Co, commonly known as Taylor's Bell Foundry or simply Taylor's, is the world's largest working bell foundry, located in Loughborough, Charnwood borough of Leicestershire, in the United Kingdom. It was bought out of Administration in 2009 by a consortium called UK Bellfoundries Ltd who successfully re-financed and re-established the business. Since then the company has re-established its presence not only in the UK but also in the North American Carillon and other export markets. The restoration of the foundry buildings commenced with the re-opening in 2012 of the foundry's own Campanile which contains the most pealed bells in the world. It is one of the few Victorian purpose built manufacturing sites still being used for its original purpose and therefore of considerable heritage merit.

The company manufactures bells for use in clock towers, change ringing peals, chimes, and carillons. In 2005 John Taylor's had merged with Eayre & Smith Ltd (bellhangers) and from 2005 until 2009 became Taylors Eayre & Smith Ltd.[1]

The Foundry has a museum of bells and bellfounding which is the only one of its kind in the UK.

The present company is part of a line of bellfounders dating back to Johannes de Stafford in the 14th century who was also a mayor of Leocester.[2] The Taylor family became involved in 1784 and a foundry was established on the current site in 1839. The Taylors also had foundries in Oxford and St Neots between 1786 and 1854.[3] Taylors were the first bellfounder to adopt "true-harmonic" tuning in the late 19th century.[4] The foundry is based in buildings on Freehold Street which are Grade 2* listed.

On 18 September 2009 the company went into administration.[5][6] Mazars, who had previously been acting as advisors to the company during attempts to secure extra funding were appointed Administrators.[7] On 2 October 2009 it was reported that the administrators were "optimistic about its future."[8] On 15 October 2009, in a statement released by UK Bellfounders Ltd., a consortium of ringers, members of the bell industry and other investors, it was stated that the foundry would reopen on Monday 19 October, reverting to the previous name of John Taylor & Co.[9][10] Before September 2009 the foundry was employing 26 people and since then the new company employs 21 including 4 Apprentices. In 1963, Paul Taylor, last of the Taylor family in the business, appeared on the American TV panel show "What's My Line?", challenging the panel with his occupation as a bell maker.[11] His widow, Mrs Merle Taylor is Hon President of the new company. The National Twelve Bell Contest is competed for annually by the leading teams in England for "The Taylor Trophy".

In 1881 Taylor's cast at Loughborough, "Great Paul", which is the largest British cast bell in Britain, for St Paul's Cathedral London, weighing 17,002 kilograms (37,483 lb) or more than 17 metric tons. Rock band AC/DC used a 2000-pound cast bronze bell for the song, "Hells Bells", which was originally used on the "Back in Black" tour in 1980. Many churches across the world have used bells cast at Taylor's Bell Foundry, including: