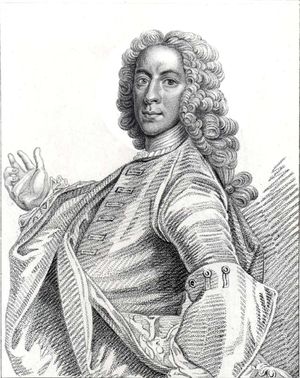 "Chevalier" John Taylor (1703–1772) was the first in a long line of British eye surgeons. While there is some evidence[citation needed] that he showed promise as an eye surgeon early in his career, it became evident that his major talent was that of self-promotion.[citation needed]

Dubbing himself "Chevalier" and "Ophthalmiater Royal,"[citation needed] Taylor became the self-proclaimed personal eye surgeon to King George II, the pope, and a number of European royal families. He was as famous for his womanizing as for his surgical skills.[speculation?] Prior to performing each surgical procedure, he would deliver a long, self-promoting speech in an unusual oratorial style. (John Barrell, London Review of Books, 2004)

He was a coucher, or cataract surgeon, who performed removal of cataracts by breaking them up into pieces. He has been accused by some[who?] for accelerating the process by which composer George Frideric Handel became blind. Many (including his contemporaries)[who?] believe that Johann Sebastian Bach also died of complications due to his surgery (Trevor-Roper, Documents of Ophthalmology, 1989), although one dissenting view concerning Bach is presented in a recent article by Dutch ophthalmologist Dr. R. Zegers,[1] who writes that "after his training, Taylor started practicing in Switzerland, where he blinded hundreds of patients, he once confessed" but "it is very difficult to make a clear connection between the operations and the illness that killed [Bach]... Certainly [Taylor's] operations, bloodletting, and/or purgatives would have weakened him and predisposed him to new infections".

He traveled throughout Europe in a coach painted with images of eyes.[2] His arrival in a town would be publicised several days in advance to draw the largest crowd and he claimed[citation needed] to be able to cure misaligned eyes with his surgical skills. His trick was to make a small incision in the conjunctiva of the eye and cover the other eye. He would then instruct the patient to leave the eye covered for seven days, during which interval he would contrive to leave town and be as far away as possible, when the eye covering was removed.

Writer Samuel Johnson uses Taylor's life and career as an example of "how far impudence may carry ignorance." Gustav Meyrink's masterpiece Der Golem (1914) contains a villain, an eye surgeon by the name of Dr. Wassory, who may have been influenced by Taylor's career.[speculation?]

It seems he died in obscurity in 1772, after spending the last years of his life (ironically) completely blind.[3] However, the musicologist Dr. Charles Burney claims that he died on the morning of Friday 16 November 1770 in Rome, also claiming to have "dined with him at my table d'hote a few days before his death".[4]