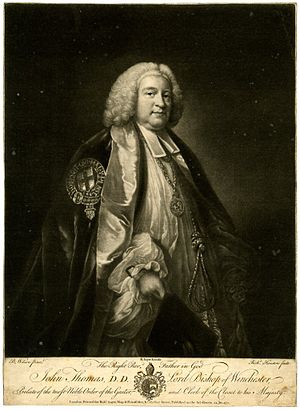 He was educated at Charterhouse School and Christ Church, Oxford, where he graduated M.A. in 1719 and became Fellow of All Souls College, Oxford in 1720.[1]

He was the son of Stremer Thomas, a colonel in the Guards Regiment, born on 17 August 1696 at Westminster, and educated at Charterhouse school. He matriculated from Christ Church, Oxford, on 28 March 1713, and took the degrees of B.A. 1716, M.A. 1719, B.D. 1727, and D.D. 1731. In 1720 he was elected fellow of All Souls' College, and, having been disappointed of a living promised to him by a friend of his father, took a curacy in London. Here his preaching attracted attention; in 1731 he was given a prebend in St Paul's Cathedral, and was presented by the dean and chapter in 1733 to the rectory of St. Bene't and St. Peter, Paul's Wharf, which he retained till 1757.[1]

In 1742 Thomas succeeded to a canonry of St. Paul's, and held it till 1748. In 1742 he had been made one of George II's chaplains, and preached the Boyle lectures, which he did not publish; and, having secured the favour of the king when Prince of Wales, he was given the bishopric of Peterborough, and consecrated at Lambeth Palace on 4 October 1747.[1]

In 1752 Thomas was selected to succeed Thomas Hayter as preceptor to the young Prince of Wales, later George III, James Waldegrave, 2nd Earl Waldegrave being governor; these appointments were directed against the influence of the Princess Dowager. In 1757 he followed John Gilbert as bishop of Salisbury and also as clerk of the closet, and in 1761 was translated to Winchester in succession to Benjamin Hoadly.[1]

Thomas died at Winchester Palace, on 1 May 1781, and was buried in Winchester Cathedral. There are portraits of the bishop at the palaces of Salisbury and Lambeth, and a fine mezzotint engraving (three-quarter length in robes of the Garter) by R. Sayer from a picture by Benjamin Wilson, published on 24 January 1771.[1]