From Infogalactic: the planetary knowledge core
Jump to: navigation, search
This article is about the former Archbishop. For the 1950s and 1960s singer, see Johnny Tillotson.

Tillotson was the son of a Puritan clothier at Haughend, Sowerby, Yorkshire. Little is known as to his infancy and boyhood, but it would seem that one day, about the year 1640, his mother, who had married a tailor at Sowerby Bridge, brought her little son over to Colne, for the double purpose of change of air and scenery and receiving his first lessons within the walls of its Grammar School. Doubtless, too, as he had relatives in Pendle Forest, she would wish him to be near them, for the lad was liable to fainting fits, and of a somewhat weakly constitution. The nature and duration of his studies here are alike forgotten. [1] He entered as a pensioner of Clare Hall, Cambridge, in 1647, where his tutor was David Clarkson. He graduated in 1650 and was made fellow of his college in 1651.[2][3]

In 1656 Tillotson became tutor to the son of Edmund Prideaux, attorney-general to Oliver Cromwell. About 1661 he was ordained without subscription by Thomas Sydserf, a Scottish bishop. Tillotson was present at the Savoy Conference in 1661, and remained identified with the Presbyterians until the passing of the Act of Uniformity 1662. Shortly afterwards he became curate of Cheshunt, Herts, and in June 1663, rector of Kedington, Suffolk.[3]

He now devoted himself to an exact study of biblical and patristic Catholic writers, especially Basil and Chrysostom. The result of this reading, and of the influence of John Wilkins, Master of Trinity College, Cambridge, was seen in the general tone of his preaching, which was practical rather than theological, concerned with issues of personal morality instead of theoretical doctrine. This plain style of preaching is reflective of the late 17th century, when the integration of reason into Protestant theology came to be seen as one of its finest attributes against Roman Catholicism. Tillotson himself was personally tolerant enough towards Roman Catholics, remarking in a famous sermon that while Popery was "gross superstition", yet "Papists, I doubt not, are made like other men."

He was a man of the world as well as a divine, and in his sermons he exhibited a tact which enabled him at once to win the ear of his audience. In 1664 he became preacher at Lincoln's Inn. The same year he married Elizabeth French, a niece of Oliver Cromwell; and he also became Tuesday lecturer at St Lawrence, Jewry (where he was later buried). Tillotson employed his controversial weapons with some skill against atheism and Catholicism. In 1663 he published a characteristic sermon on "The Wisdom of being Religious," and in 1666 replied to John Sergeant's Sure Footing in Christianity by a pamphlet on the "Rule of Faith." The same year he received the degree of D.D.[4]

Dean of Canterbury and Archbishop 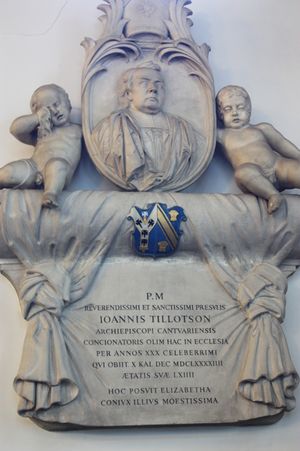 In 1670 he became prebendary and in 1672 dean of Canterbury. That latter year he was also elected a Fellow of the Royal Society.[5] In 1675 he edited John Wilkins's Principles of Natural Religion, completing what was left unfinished of it, and in 1682 his Sermons. Along with Burnet, Tillotson attended William Russell, Lord Russell on the scaffold in 1683. In 1684, he wrote a Discourse against Transubstantiation. He afterwards enjoyed the friendship of Lady Russell, and it was partly through her that he obtained so much influence with Princess Anne, who followed his advice in regard to the settlement of the crown on William of Orange. He possessed the special confidence of William and Mary, and was made clerk of the closet to the king in March 1689.[4]

It was chiefly through his advice that the king appointed an ecclesiastical commission for the reconciliation of the Dissenters. In August of this year he was appointed by the chapter of his cathedral to exercise the archiepiscopal jurisdiction of the province of Canterbury during the suspension of Sancroft. He was also about the same time named dean of St Paul's. Soon afterwards he was elected to succeed Sancroft; but accepted the promotion with extreme reluctance, and it was deferred from time to time, at his request, until April 1691. In 1693 he published four lectures on the Socinian controversy,[6] partly to clear his own name from charges of sympathy with Socinianism in his previous associations with Thomas Firmin, Stephen Nye and others.

His attempts to reform certain abuses of the Church of England, especially that of clerical non-residence, awakened much ill-will, and of this the Jacobites took advantage, pursuing him to the end of his life with insult and reproach. He died on 22 November 1694.[4]

For his manuscript sermons Tillotson's widow received 2500 guineas. Ralph Barker edited some 250 of them together with the "Rule of Faith" (1695–1704). In 1752 an edition appeared in 3 vols., with Life by Thomas Birch, compiled from Tillotson's original papers and letters. Various selections from his sermons and works have been published separately.[7] AMS Press, New York, published a modern edition of his works in the 1980s. In his home town of Sowerby, a statue of Tillotson still exists in St. Peter's church and an avenue is named after him in the lower end of the town.

He is buried in the church of St Lawrence Jewry just west of the Bank of England in the City of London.