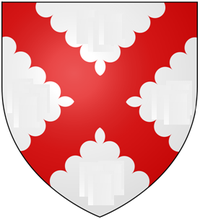 Arms of Tibetot (or Tiptoft): Argent, a saltire engrailed gules[1]

This English nobleman was the eldest son and heir of Sir Pain Tiptoft (c.1413) by his spouse, Agnes, née Wrothe (d.bef.1413). He was Lord of the Manors of Burwell and Eversden, in Cambridgeshire. In 1413 he was heir to his first cousin, Elizabeth Wrothe, wife of Sir William Palton, Kt., by which he inherited the manors of Nether Wallop, Hampshire, Worcesters (in Enfield), Middlesex, and Redlynch (in Downton, Wiltshire).

He was knighted in 1399. He was returned to Parliament as knight of the shire for Huntingdonshire in January and October, 1404 and again in 1406, when he was elected Speaker of the House of Commons. He represented Somerset in 1414.

On 7 January 1426 he was summoned to the House of Lords whereby he was created Baron Tiptoft.