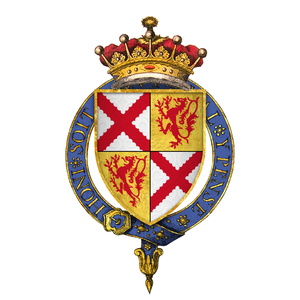 John Tiptoft, 1st Earl of Worcester KG (Eversden, 8 May 1427 – 18 October 1470) was an English nobleman and scholar, Lord High Treasurer, Lord High Constable and Deputy Governor of Ireland. He was known as the Butcher of England. [1]

He was the son of John Tiptoft, 1st Baron Tiptoft, and Joyce Cherleton, co-heiress of Edward Charleton, 5th Baron Cherleton. He was notable for his education, studying at University College at Oxford University from the ages of 13 to 16.

He enjoyed a brilliant early career. After being created Earl of Worcester on 16 July 1449, he was employed in a number of official posts, first as Lord High Treasurer (1452–1454) and then as Lord Deputy of Ireland (1456–1457). He then departed on a pilgrimage to the Holy Land, and returned by way of Italy, where he stayed for two years, studying in Padua. There he gained a considerable reputation as a scholar of Latin.

He returned to England in 1461 and was received with favour by Edward IV, receiving the Order of the Garter and being appointed to a number of posts, including in 1461, Constable of the Tower of London for life and in 1463, Lord Steward of the Household. Most notably, as Lord High Constable (1462), he presided over trials which resulted in the attainders and executions of Lancastrians, an office which he carried out with exceptional cruelty, having them beheaded, quartered, and impaled. In 1464 he was appointed Chancellor of Ireland for life and in 1467 he again became Lord Deputy of Ireland, and brought about the execution of Thomas FitzGerald, 7th Earl of Desmond.

Upon the Readeption of Henry VI in 1470, Tiptoft was unable to escape with Edward IV and his supporters. He was captured by the Lancastrians and beheaded at the Tower of London, attainted and his title forfeited. His last act was to ask the executioner to chop off his head with three blows, for the sake of the Trinity.[2]

The title "2nd Earl of Worcester" was only the only peerage restored to his minor son Edward, on 14 Apr 1471, although no Regent is named. [3] His son Edward died in 1485, while still a minor, and without issue. The titles thus became extinct on his death,[4] or in abeyance between his aunts as co-heiresses.