John Trevor was born around 1637 or 1638, the exact date of his birth being unrecorded. His father, also called John Trevor, was the son of Sir Edward Trevor; his mother was Margaret Jeffreys. The family lived at Brynkinalt in the Welsh county of Denbighshire.[1]

Trevor was educated at Ruthin School, and he started his career as a clerk for his relative Arthur Trevor.[2] From there he worked his way up with the help of the patronage of George Jeffreys until he was appointed a king's counsel by Charles II.[2]

In 1685 he was appointed to the high offices of Master of the Rolls and Speaker of the House of Commons by James II.[2] Being a tory and a partisan of James II, the accession of William III saw Trevor deprived of his office. In 1690, however, he once again returned to parliament as Speaker. From 1693, he also once again held the judicial office of Master of the Rolls. Between 1692 and 1695, he represented Newry in the Irish House of Commons.

As Speaker he was memorable for being severely cross-eyed—the affliction was so confusing to members of the House that they were frequently uncertain as to which of them had "caught the Speaker's eye", and would try to speak out of turn.[3] 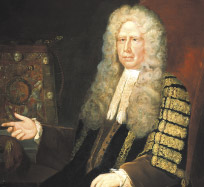 Trevor married Jane Mostyn, the daughter of Sir Roger Mostyn. They are known to have had four children: Edward, Arthur, John and Anne. Trevor's wife predeceased him, dying in August 1704.[1]

Through his daughter Anne, Sir John was the ancestor of the Hills, Marquesses of Downshire, the family of Hill-Trevor, Viscounts Dungannon, the Duke of Wellington, and Queen Elizabeth II.