From Infogalactic: the planetary knowledge core
Jump to: navigation, search
For his father, who is sometimes referred to as "John V", see John IV, Duke of Brittany.

John V the Wise (in Breton, Yann V ar Fur, in French Jean V le Sage, and traditionally in English sources John VI) (24 December 1389 – 29 August 1442), was duke of Brittany, count of Montfort, and titular earl of Richmond, from 1399 to his death. He was son of Duke John IV (Jean IV) and Joan of Navarre.

John V became Duke of Brittany in 1399 when still a minor upon the death of his father, John IV. His mother, Joan of Navarre, served as regent in the initial portion of his reign.[lower-alpha 1]

Unlike his father, John V inherited the duchy in peace, or so the end of the Breton War of Succession and John IV's military conquests in Brittany promised. However, his father's rivals for the duchy, the Pentheiveres, continued to plot against him. Furthermore, John had to secure the peace of the duchy during an unstable period culminating in Henry V of England's invasion of France.

He became duke at the age of ten, and began his reign under the tutelage of Duke of Burgundy, Philip the Bold, who was ravaging nearby Jersey and Guernsey. He made peace with the king of France, Charles VI, whose daughter, Joan of France, he married. He also reconciled with the powerful magnate Olivier de Clisson, formerly an enemy of his father. In 1404, he defeated a French force near Brest. A potential conflict with Clisson was averted by the latter's death. 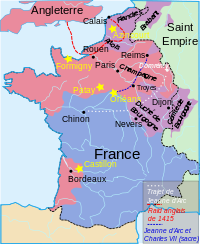 Brittany shown in English Territories circa 1415

When Henry V invaded France, John was initially allied to the French. However, he missed the Battle of Agincourt. The confusion in the aftermath of the battle allowed him to seize Saint-Malo which had been annexed by the French. He then adopted a policy of switching between the two parties, English and French. He signed the Treaty of Troyes, which made Henry V heir to France, but he allowed his brother Arthur de Richemont to fight for the French. Arthur was imprisoned by the English.

Abduction by the Counts of Penthièvre

The Counts of Penthièvre had lost the Breton War of Succession (1341–1364) in which they had claimed the ducal title of Brittany from John's grandfather, John of Montfort. The war ended in 1364 in a military victory for John's father, in which the Penthièvre claimant, Charles of Blois, died. His widow, Joanna, Countess of Penthièvre, was forced to sign the Treaty of Guérande which concluded the conflict. The treaty stated that Penthièvres accepted the Montforts's right to the dukedom, but if they failed to produce a male heir the duchy would revert to the Penthièvres.

Despite the military loss and the diplomatic treaty, the Counts of Penthièvre had not renounced their direct ducal claims to Brittany and continued to pursue them. In 1420, they invited John V to a festival held at Châtonceaux. John came and was arrested. The count and countess of Penthièvre then spread rumours of his death and moved him to a new prison each day. John V's wife, Joan of France, called upon all the barons of Brittany to respond. They besieged all the castles of the Penthièvre family one by one.

Joan ended the crisis by seizing the dowager countess of Penthièvre, Margaret of Clisson, forcing Margaret to have the duke freed. After the release, the Châtonceaux citadel was completely destroyed and the name changed to Champtoceaux. As a result of this failed imprisonment, in 1420 the heirs of Joanna, Countess of Penthièvre surrendered Penthièvre to the Duke. This ended the element of the Treaty of Guérande that was designed to favor Joanna and her heirs. The Montforts declared that the treaty had been broken, and so they were now no longer obliged to ever surrender the duchy to the Penthièvres under its terms. This ensured that Anne of Brittany succeeded to the duchy later in the century.

While captured by the English, John II, Duke of Alençon had sold his fiefdom of Fougères to John V in order to raise the ransom for his release. After Alençon's release, his attempts to recover his territories led to conflict. John laid siege to Alençon's fortress at Pouancé in 1432. Arthur de Richemont, his brother, who accompanied him, induced him to make peace.

Working with Bishop Jean de Malestroit, he began the construction of a new cathedral in Nantes, placing the first stone in April 1434.[1]

A statue of the Duke of polychrome wood is in the chapel of Saint-Fiacre in Faouët. His tomb in Tréguier cathedral was destroyed. It was replaced by a new one in the 20th century.

John V married Joan of France, daughter of King Charles VI "the Mad" and his wife Isabeau of Bavaria. By her he had seven children:

John V died in 1442 and was succeeded by his eldest son, Francis, as Duke of Brittany.