John had no imperial ambitions of his own and refused to be crowned co-emperor, despite being offered the opportunity by Andronikos III Palaiologos several times. After the death of the emperor, John again refused to take the throne and insisted that the rightful heir was John V, and that he would assume administrative control of the Empire until he was of age. Despite his stalwart devotion to the young emperor and his mother, the empress Anna of Savoy, his friendship with the late emperor had aroused both the jealousy of the Patriarch of Constantinople and his former protégé Alexios Apokaukos, and the paranoia of the empress who suspected him to be a usurper. When John Kantakouzenos left Constantinople for the Morea, his enemies seized the opportunity to declare John V emperor and order the disbandment of Kantakouzenos's army. When news reached the army at Didymoteichon in Thrace, they declared Kantakouzenos emperor, marking the start of the civil war between Kantakouzenos and the regency in Constantinople.

The ensuing civil war lasted six years. After a failed attempt to reach a settlement by diplomacy during the winter of 1341-42, Kantakouzenos marched to Thessalonica, where an ally was going to hand the citadel over to him. Apokaukos was able to reinforce the city by sea, leaving Kantakouzenos stranded in the mountains of Macedonia. He was forced to turn to Stefan Dušan, the young king of Serbia, who lent him forces to try to break into Thrace, where his headquarters of Didymoteichon was under siege by the regency and their Bulgarian allies. John was twice unsuccessful in breaking through the line of regency-controlled fortresses in Macedonia, and instead made another attempt on Thessalonica. Dušan switched sides at this point, leaving John yet again stranded before the walls of that city. It was only with the help of his close friend and ally Umur of Aydın that he was able to escape to Thrace, returning to Didymoteichon at the end of 1343[4].

After another three and a half years of war, during which time Stefan Dušan conquered most of Macedonia and Epirus, John secretly entered Constantinople with 1,000 men early in 1347 and forced the regency to capitulate. Empress Anna was forced to agree that he should be senior emperor for ten years, after which her son John V would rise to equal status. John VI's triumph in the six-year civil war is the subject of the poem "John Kantakouzenos Triumphs" by the modern Greek poet Constantine Cavafy.

Kantakouzenos would reign for another seven years. During this time, the empire, already greatly reduced, continued to be assailed on every side. Turkish marauders continued to launch raids from Anatolia into Thrace, plundering the already thoroughly-ravaged province. In 1347 the Black Death arrived in Constantinople, killing a huge portion of its population and spreading to outlying areas.

Stefan Dušan continued his war against the Byzantine Empire, seizing the whole of Epirus, Thessaly, Macedonia, excepting only Thessalonica and its outskirts. Thessalonica was still ruled by the Zealots, who had taken over the city during the civil war and ruled as an independent commune ever since. John VI and John V appeared before its walls with an army in 1349, and the population opened the gates to them. John V was given rule of the city until he reached majority. Kantakouzenos continued on into Macedonia, where he reclaimed several fortresses from the Serbs. This forced Dušan to the negotiating table, where the two monarchs agreed to an end of hostilities. Although this brought Byzantium peace, it also confirmed the loss of half the lands it had ruled just twenty years before.

John fought a modestly successful war in 1348 with the Genoese. The point of contention was customs dues collected at the Genoese colony of Galata, across the Golden Horn from Constantinople, which drew revenue away from the imperial treasury. A successful resolution to the conflict improved the empire's fiscal situation, allowing it to recover somewhat from the devastation of the civil war and Black Death. A few years later, Byzantium was drawn into the Venetian–Genoese War of 1350–1355, which ended in defeat and an unfavorable treaty signed in May 1352[5].

At about this same time, John V began demanding a greater share in power. Although the boy had not yet reached majority, John VI granted him control of Didymoteichon and western Thrace. Soon after, Palaiologos attacked John VI's son Matthew Kantakouzenos at his headquarters of Adrianople, driving him out of the city. This inaugurated a new civil war, in which the Palaiologos faction employed Serbian and Bulgarian mercenaries and the Kantakouzenoi employed Ottoman Turks. The latter were victorious at the Battle of Demotika in October 1352, forcing John V into internal exile on the island of Tenedos. It was a Pyrrhic victory for Kantakouzenos, as his Muslim mercenaries began pillaging Christian villages, turning public opinion sharply against him. In 1354, an earthquake destroyed the fortifications of Gallipoli, allowing the Turks to seize their first permanent territory in Europe. Later that year, John V escaped from exile and secretly entered Constantinople, raising the population against Kantakouzenos and forcing him to abdicate.

Retirement as a monk 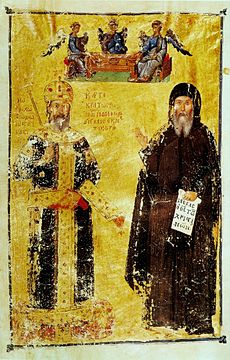 Kantakouzenos retired to a monastery, where he assumed the name of Joasaph Christodoulos and occupied himself with literary labors.

In 1367 Joasaph was appointed the representative of the Eastern Orthodox Church to negotiate with the Latin Patriarch of Constantinople Paul to attempt a reconciliation of the Eastern Orthodox and Roman Catholic Churches. They agreed to call a grand ecumenical council to be attended by the Pope and all the Patriarchs and bishops and archbishops of both the eastern and western churches.[6] This plan was subsequently refused by Pope Urban V and so nothing came of it.

Kantakouzenos died in the Peloponnese and was buried by his sons at Mistra in Laconia.

John Kantakouzenos oversaw a period of disaster for the Byzantine Empire. The Serbs and Ottoman Turks were on the ascendant, the Black Death began its sweep through Europe, and Byzantium lost over half its territory. Although historians dispute whether the empire could have been restored to its previous glory following the recovery of Constantinople, most agree that the disasters of John's reign marked the point of no return.

John's History in four books deals with the years 1320–1356. An apologia for his own actions, it needs to be read with caution. It can be partially compared to and corrected by the work of a contemporary, Nikephoros Gregoras, although the two men were of the same class and shared similar prejudices [7]. John's work possesses the merit of being well arranged and homogeneous, the incidents being grouped around the chief actor in the person of the author, but the information is defective on matters with which he is not directly concerned. Kantakouzenos also wrote a defense of Hesychasm, a Greek mystical doctrine.

By his wife Irene Asanina, a daughter of Andronikos Asan (son of Ivan Asen III of Bulgaria by Irene Palaiologina, Empress of Bulgaria, herself daughter of Michael VIII Palaiologos), John VI Kantakouzenos had several children, including:[8]